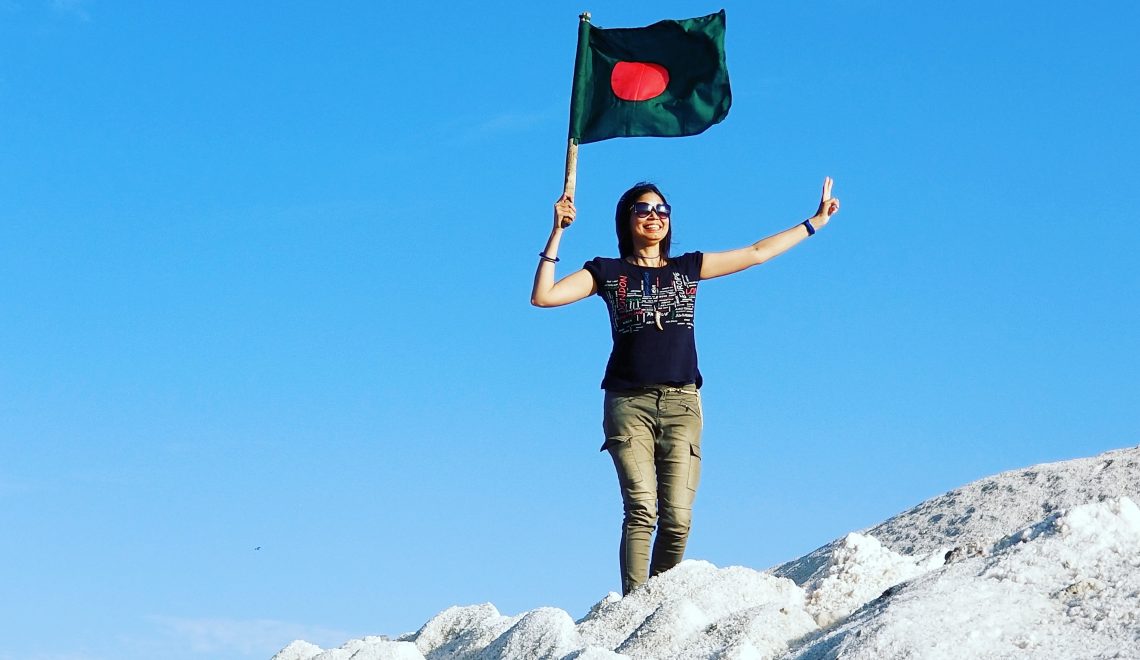 Najmun Nahar: All around the world

Known as the ‘Flag Girl’, Najmun Nahar is in the process of visiting every country in the world, taking the flag of her native Bangladesh with her. She’s won numerous awards, including one from feminist magazine Ananya in Bangladesh and the Peace Torch-Bearer award in the United States. She is currently working on a book documenting her travels. We asked her what keeps her moving forwards.

What inspired you to travel the world?

I was born in Lakshmipur in Bangladesh, but now I consider the world to be my home. My grandfather was an Islamic scholar who travelled across the Middle East from 1926-31 and told me all about his travels. My father gave me all kinds of books – but the only ones that interested me were the travel books. These men inspired me to start my own travels. I’m also passionate about cartography: the art and science of mapmaking. From the first time I saw a map it showed me a world that I couldn’t wait to explore.

I grew up in a society where I saw girls who weren’t allowed to go out alone without someone to accompany them. But I wasn’t born to be stuck within four walls. I crossed borders out of the house, out of Bangladesh, and into 140 countries of the world – and counting. I grew up trying to catch birds but I never succeeded. I always wished I had wings and could fly in the sky like them.

I joined the Girl Guides, and then at University I started my world tour, starting with Pachmari in India in 2000, camping, walking and rock-climbing with young people from around the world. This was the first time I raised the flag of Bangladesh. India was the first country I flew the flag in; the 100th was Zimbabwe, and the 140th was Brunei. I’ve also studied in Sweden and Korea.

What limitations prevent women from travelling?

I was never looking for a man; I was looking for the world. But too often women are told that marriage is their destiny. This is definitely the case in Bangladesh. Women often face discrimination and violence in the home. Some have to seek permission before they are able to do anything. This can be demoralising and many women and girls give up on their dreams. I wanted to be an example to women across the world: to show that if you try with all your heart and soul, there’s nowhere you can’t go.

What have you learned through your travels?

I’ve learned that all of humanity are part of one family and that we need to live in peace on this small blue dot. We have to stop fighting each other over race and religion. I like to think of my travelling as carrying a torch for peace across the world. I feel that my travels are a way of connecting humanity, appreciating the diversity of the world’s cultures and the fragile beauty of our natural environment.

Have you faced many dangers?

I’ve been from the highest summits to the bottom of the sea; from remote jungles to tribal areas. Sometimes I’ve become lost. I’ve had to cope without food in the African savannah. I’ve eaten raw meat to survive in Ethiopia. I was stranded in a mangrove jungle in Guinea with no food for 26 hours. I’ve waded through fierce rivers and slept out on the grass under the sky. I’ve had sunburn, and insect bites. I survived an armed robbery in Guatemala. I nearly asphyxiated on Peru’s Rainbow Mountains. I’ve crossed rivers, oceans, jungles and deserts. I’ve also dealt with more mundane travel problems: missed flights, delayed buses, bad food and more. But I’ve taken it all in my stride. Besides my own willpower, I’ve often had the support of strangers who’ve helped me through all these problems, and who’ve become my friends.

How do you plan and pay for your journeys?

It takes extensive research to create an economical travel plan. It has turned out to be much more convenient to visit neighbouring countries in Europe and Africa by road, for instance. I work hard, I save up, I budget and I stay at youth hostels to save money.

What is your next move?

I’m looking for sponsorship for my next trip. On this trip I want to work to raise awareness of climate change and our social responsibility to protect the planet we live on. While travelling, I’ve not only seen the impacts of the environmental crisis, but also the low awareness that exists about this problem. I want to spread the message about sustainable development, and about minimising the use of fossil fuels and plastics. I want to encourage remote communities to help reduce damage to the environment. I plan to travel to coastal areas and clean-up plastic waste and help animals which have been affected by pollution.

Next, I want to travel to 100 regions in 20 African countries to help motivate positive changes. The future of our world is in our hands, and particularly in those of the younger generation. I want to inspire young people to believe in themselves and become activists. I’m planning to create a global network called the Inspiration Global Network to connect young people. I have two mottoes: ‘One Earth, one home,’ and ‘One race, one culture.’ I want to spread this message as widely as I can, everywhere I go.

Our lives are short. Within this short period, we all must do something; for humanity, for our country and ourselves. Some people aspire to make ten-storey buildings. Some people have an undying love of gold and diamonds. For me, my traveling experiences are my treasures. When I climb a mountain, I feel closer to God. My travels are a spiritual journey that brings me closer to the Almighty.