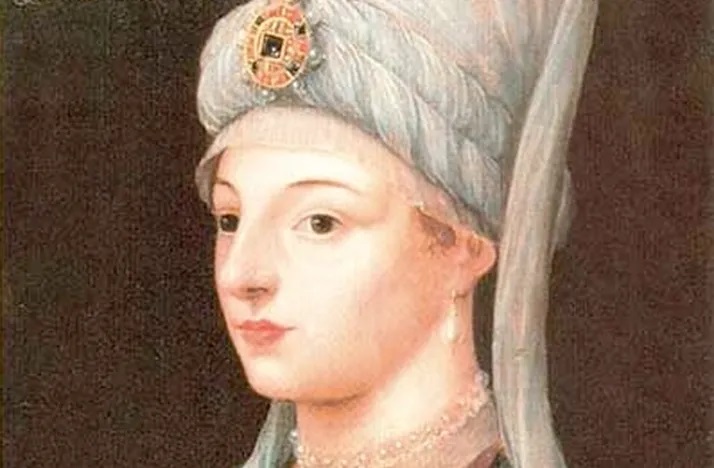 Wife of Sultan Murad III and mother of Mehmed III, Safiye Sultan was a powerful and ambitious consort and zalide sultan (queen mother) within the Ottoman court, who lived through the reigns of seven sultans. Named Safiye for her blonde hair and fair complexion, and believed to be of Albanian or Bosnian origin, she was originally a slave presented to the young Prince Murad as a concubine when she was 13.

Murad’s father, Suleiman the Magnificent, died in the same year that Safiye gave birth to Murad’s son. Murad then ascended to the throne, having all of his competitors assassinated. As Murad’s first concubine and mother of his heir, Safiye remained his only partner for five or six years after he ascended to the throne. The pair would go on to have four children together.

However, Murad’s mother Nurbanu Sultan advised him to father more children in order to underscore his right to the succession. She accused Safiye of rendering her son impotent using witchcraft, and had some of Safiye’s servants imprisoned and tortured to make them confess to helping her. Murad’s sister presented him with a pair of concubines skilled in music and dance to encourage him to abandon monogamy. This turned out to be successful. Rather than exhibiting jealousy, as her predecessor Roxelana had done, Safiye herself joined in the practice of locating concubines for her husband. Ultimately, Sultan Murad III fathered over 50 children with his concubines.

While she accepted losing her status as Murad’s sole bedmate, she maintained the power of her status as his favourite consort and advisor. A year after Murad took the throne, she was granted the rank of haseki, meaning principal concubine. A contemporary acknowledged her political influence: ‘as the mother of the prince, she intervenes on occasion in affairs of state, although she is much respected in this, and is listened to by His Majesty who considers her sensible and wise.’ Another stated that ‘she was called by all as his wife.’

Her influence was reinforced after Nurbanu died in 1583, making her the most powerful woman in the harem, and the empire. At her daughter’s wedding, she had thousands of coins scattered into the crowds watching the procession. When Murad III died in 1595, their son Mehmet succeeded to the throne. According to an English report, Mehmet had nineteen of his half-brothers assassinated on a single day in January 1595 to eliminate any competitors to his rule. The number of mourners for the young princes doubled those attending the funeral of the late Sultan.

Safiye gained even more influence in court as her son’s primary advisor.  Ambassadors and civil servants sought her intervention in the affairs of state. During the Erlau Campaign, she was granted executive power, formalising her de facto role as co-ruler. She also played a decisive role in the selection of the Grand Vizier, favouring the appointment of her own son-in-law.

Safiye corresponded with other monarchs of the period, often supporting Venetian interests and entering into personal correspondence with Elizabeth I, Queen of England who gifted her a golden coach. This was the subject of a scandal when Safiye rode through the streets in it. She even showed an attraction towards the young Englishman who delivered her the coach and discreetly sought his company, but an intimate friendship did not develop. At Elizabeth I’s request, Safiye responded to her gift by providing her with clothing suitable for an Ottoman noblewoman, described as ‘two garmentes of cloth of silver, one girdle of cloth of sliver, two handekerchers wrought with massy gold.’ Her letters to the Queen were written in five colours of ink and sprinkled in gold dust.

Due to lavish gifts from foreign nobles – particularly from the Venetian ambassadors who found her receptive to their interests – she became the richest woman in the Ottoman Empire. She also received a lavish stipend – three times that of her son – and rent money from tenancies across the region.

She remained powerful despite a lack of popularity. In 1600, the imperial cavalry troops rebelled against Esperanza Malchi, one of Safiye’s agents, and murdered Malchi and her son. Safiye was blamed for the wealth that Malchi had accumulated through their relationship and only escaped narrowly herself. Some in court were resentful of her power: Sinan Pasha, who she had had dismissed from the post of Vizier in 1951 claimed that the ‘the Sovereign had allowed himself to be influenced by a whore.’

Later, Mehmet wished to control his mother’s influence. He insisted she move out of the New Palace. However, she had built extensive support networks and,  continued to exert a tacit influence over the state through one of the chief eunuchs, appointing her allies to powerful positions. When her grandson criticised her power, she hinted to her son that he was a challenge to his power. Mehmet swiftly had him executed.

Like other Ottoman noblewomen, Safiye demonstrated her status through creating municipal buildings: mosques, madrassas, hospitals and bathhouses, as well as commencing construction of Yeni Camii, which would be completed fifty years later by Turhan Hatice. She died during the reign of her own great grandson and was buried alongside Murad III.