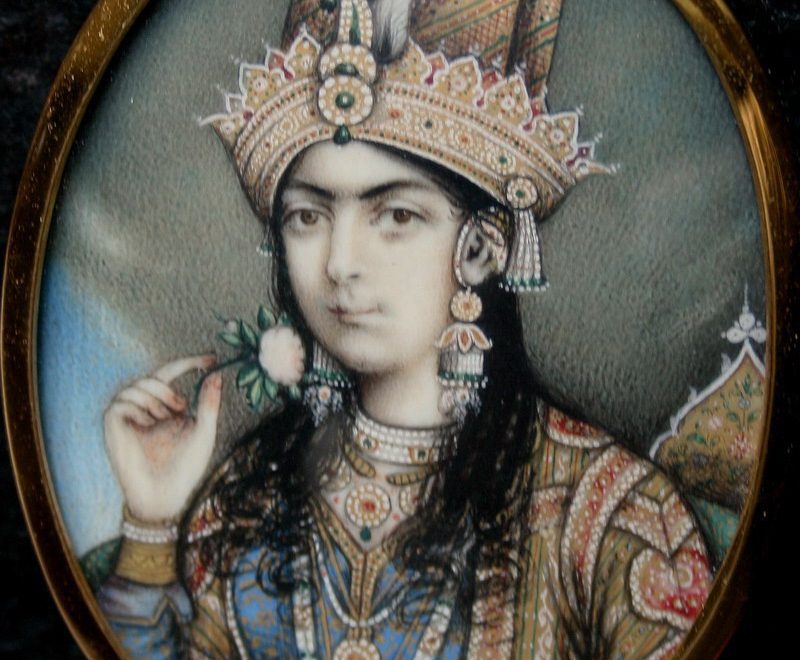 If the rosebud is opened by the breeze in the garden

The heart of one held captive by beauty and coquetry

Knows neither roses, nor colour, nor face, nor tresses – Nur Jahan

Nur Jahan (a title meaning ‘Light of the World’), was the wife of the Emperor Jahangir, and the only woman to have ruled the Mughal Empire.

Her parents fled persecution in Persia by taking a caravan along the Silk Road. Nur was born in Kandahar en route to India, and named Mihr un-Nissa (Sun of Women). After arriving at the court of Emperor Akbar near Agra, Nur’s father gained a position at the Imperial court. He would later become an important functionary within the Empire. When Nur was around eight years of age, the family established a townhouse in Agra. Here, she and her sisters Manija and Khadija were given an education to prepare them for elite marriages. All three were married to up-and-coming Mughal officers. At 17, Nur was married to a former military officer Ali Quli Beg. According to legend, the young Prince Salim (who would later take the name Jahangir and rule the empire) was immediately smitten with her. Nevertheless, in 1594, Nur and Ali Quli were married and moved to Burdwan in Bengal, over a month’s travel from Agra. Here, in around the year 1600, Nur gave birth to a daughter, Ladli, who would be the couple’s only child.

Ali Quli was frequently absent due to his duties, leaving Nur in command of the estate. He also allied with Salim who was challenging his father Akbar’s rule. However, the alliance between the men did not endure: possibly Quli was alienated by Salim’s vicious temper, or he may have lacked faith in Salim’s capacity to overthrow his father.

In any event, due to the death of both of Salim’s brothers – from alcoholism, an affliction common to Mughal princes – he ascended to the throne in 1605 at 36 years of age. He renamed himself Nur-ad-Din Jahangir (Light of Faith, Conqueror of the World), inheriting a wealthy, well-organised state. His first challenge was an attempt at usurpation by his own 18-year-old son, Khusraw. Khusraw was finally defeated, and Quli was killed while resisting arrest as a co-conspirator in his campaign. The widowed Nur and her daughter were summoned to the harem in Agra, joining Jahangir’s many wives and their huge support staff.

She was thirty-four when they married, becoming his twentieth and final wife. Her father was likewise promoted to Vizier, a position he would maintain for the rest of his life. Nur’s brothers were also given influential positions within the court. By the 1620s, members of Nur’s extended family governed the regions of Lahore, Kashmir, Bengal, Orissa and Awadh.

Jahangir’s personal records reflect a warm admiration for his wife, the most affectionate portrait of a Mughal wife ever written. He was particularly impressed by her prowess as a hunter. One contemporary portrait of Nur shows her expertly reloading a large musket. Once, while mounted on the back of an elephant, she killed four tigers without missing a single shot. Her husband showered her in coins in recognition of her skills, while a court poet improvised a couplet: ‘Though Nur Jahan be in form a woman / In the ranks of man she’s a tiger slayer.’

She also led a rescue party when her husband was abducted by a rival, brandishing a musket and riding upon a war elephant. Although she initially ended up captured herself, she recruited her loyal troops and secured their freedom from captivity.

Nur gained status within the harem through her generosity and compassion, providing dowries for 500 orphans, designing an affordable wedding dress called a Nur Mahali and arranging marriages for her staff. Jahangir’s court took the form of a camp, constantly moving about; his harem was held as a tent for each royal woman. Through the court’s travels, Nur would ultimately travel across the entire Mughal Empire.

Nur supported her husband whose alcoholism had escalated to the abuse of opium. Jahangir’s habits gave Nur an unprecedented leeway in controlling the state. With skills developed from managing her estate in the absence of her first husband, Nur was skilled in household politics and diplomacy. Unlike any other Mughal woman, she signed her edicts in her own name, Nur Jahan Padshah Begum, rather than in the role of wife or mother. Like her husband, she presented herself before the populace at a jharokha (balcony) as a sign of her rule. Coins of the realm were minted with her likeness on the reverse side to her husband.

She commissioned the construction of a travellers respite on the road between Agra and Lahore, which could host two thousand guests and their mounts, as well as a garden known as theLight-Scattering Garden, which she built in Agra close to the location where the Taj Mahal would later be constructed. After her parents died in 1622, she had a lavish tomb constructed for them.

With her deep involvement in courtly politics, Nur was also a stakeholder in the succession of her husband. She had married her daughter to Shahyar, one of Jahangir’s heirs, in the hope of maintaining her power at court after his death. However, after Jahangir’s death, Nur Jahan’s support at court evaporated instantly. Her brother was one of the courtiers who manoeuvred Shah Jahan into the throne instead of Shahyar.

Later historians tended to erase Nur Jahan from official history, uncomfortable with the legacy of a female co-sovereign within a patriarchal structure. Nevertheless, even Shah Jahan himself was forced to acknowledge her importance upon her death at 72 years of age: ‘she seized the reins of government and abrogated to herself the supreme civil and financial administration of the realm, ruling with absolute authority till the conclusion of his reign.’ Nur Jahan has become the subject of several novels and films, from the silent movie Noor Jahan (1931) to a recent historical drama Siyaasat (2015) showing her continued importance as a figure in South Asian history.