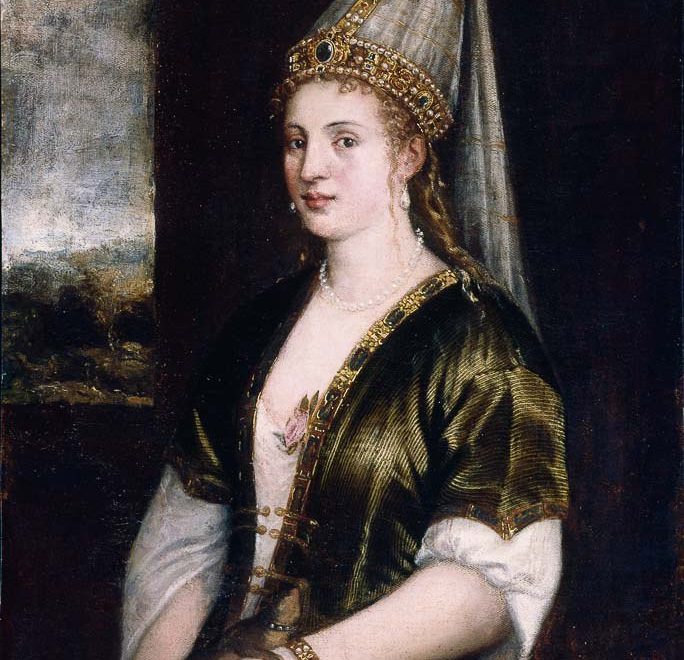 This week there has occurred in this city a most extraordinary event, one absolutely unprecedented in the history of the Sultans. The Grand Signior Suleiman has taken himself as his Empress a slave woman from Russia. There is great talk about the marriage and none can say what it means. –  Genoan traveller

Roxelana’s birth name is unknown. It is speculated that she was born as Anastasia or Aleksandra Lisowska in Ruthenia, Eastern Europe – in what was at the time part of Poland, and is now located in Ukraine. She was probably abducted by Crimean Tatar raiders and trafficked to Istanbul, where she was sold into slavery as a young girl. At the time Slavic, Circassian and Greek slave-girls sold for high prices. Her assumed name – Roxelana – refers to her purported Ruthenian origin.

As a teenager, she was inducted into the harem of Süleyman I, known as Süleyman the Magnificent. In the harem, she was taught Arabic, Farsi, Turkish, poetry, calligraphy and other arts considered suitable to women of the imperial court. Here, she became known as ‘Hürrem Sultan’ – meaning joyful one – after her conversion to Islam.

Although one of many inmates of the harem, she rose from the status of concubine to become chief wife and Süleyman’s consort. In this period, it had been Ottoman practice for a ruler to abandon a concubine after she bore him a male heir. The concubine was expected to devote herself to her son thereafter, leaving the harem to reside in the provinces, where she would prepare her son for his future political role. This delimited the number of sons each concubine could bear, reducing the number of competitors for the throne. This strategy was probably developed to decrease the levels of fratricide amongst the sons of the Ottoman Sultans.

However, Süleyman refused to part with Roxelana even after she had borne their first son. In fact, she remained at his side throughout her life, bearing six of his children in total. Süleyman I’s willingness to buck a century of tradition by refusing to part with Roxelana was unprecedented – to the point that some accused Roxelana of sorcery. However, she herself was not entirely confident of her influence over the Sultan’s attention.  According to the Venetian ambassador, when Süleyman was gifted with two concubines from Ruthenia, she became agitated to the point that he regifted them to placate her.

To historians, Roxelana is imagined as an unscrupulous manipulator. Süleyman’s eldest son Mustafa was the heir presumptive, ahead of Roxelana’s sons. Mustafa’s mother Mahidevran grew concerned by Roxelana’s increasing influence with the Sultan, and attacked her violently, scratching her face and describing her as ‘sold meat’. Mahidevran then left the court for the provinces with her son, according to Ottoman tradition. While Mahidevran and her son were absent, Roxelana instantiated herself further into the court and deeper within the Sultan’s affections, bearing more children. Süleyman began to dispose of his harem, devoting himself exclusively to Roxelana. Historian Leslie Pearce credits Roxelana with establishing ‘a nuclear family in a polygamous world.’

Around 1530, Süleyman married Roxelana, crowning her rise from sex slavery to the heart of power in one of the most powerful empires of the period. Foreign observers describe the wedding as a grand celebration, which featured feasts and parades of exotic animals. Süleyman was the first Ottoman ruler to marry for over a century. He even wrote Roxelana touching love poetry describing her as ‘the flaming candle that lights my pavilion.’ The couple corresponded constantly whenever they were separated. Rather than remaining in the harem with the other women, she moved into the palace with Süleyman, where her chambers became a seat of significant power and influence. Again, this represented a break with Ottoman tradition, whereby royal mothers were expected to accompany their sons into the provinces, as Mahidevran had done. In 1534, after the death of Süleyman’s mother, Roxelana became his most trusted advisor. This was shown through their intimate correspondence, which combined hard-headed politics with tender romance.

Roxelana recognised that her son-in-law Mustafa represented a threat to her and her sons. As the first-born son, and a charismatic and competent leader, popular with the army, his ascension to Sultan seemed inevitable – and it seemed equally inevitable that he would arrange the assassination of her sons as competitors thereafter. She had married her daughter to the Grand Vizier to recruit him as an ally and to strengthen her position at court. Roxelana was in a strong position to cast aspersions on Mustafa’s loyalty.

Süleyman arranged for Mustafa to be assassinated. This was a massively unpopular decision which he later regretted, and for which Roxelana has historically been held accountable, for instance in the French drama La Soltane. However, non-fictional sources suggest that there were more complex political motivations behind the murder than the Sultan’s wish to please an ambitious consort.

In the palace, Roxelana entered into correspondence with leaders from across the world, including Bona Sforza, Queen of Poland and Duchess of Lithuania, leading to several treaties between the two territories.  She also built relationships with the wife and sister of Ṭahmāsp I, shah of Persia. She also devoted resources towards developing the city with the collaboration of Sinan, a well-known architect, including the institution of charitable endowments to finance madrassas, schools, alms-houses for the destitute, a hospital, and a mosque with ample space for women to worship.

She ushered in an era known as the ‘Sultanate of Women’. This term referred to a period in which women of the Ottoman court held massive informal influence over the affairs of state. This lasted to the very end of the empire, bringing Ottoman practice in line with the contemporary movement towards powerful female consorts in the Safavid Empire and Europe.

Roxelana died in April 1558. Süleyman died eight years later and was succeeded by his and Roxelana’s son Selim, known as ‘the Sot’ for his dissolute lifestyle, and ‘the Blond’ for his complexion. Roxelana’s life has been dramatized in the epic TV series, Magnificent Century which was popular in Turkey as well as the Balkans and the Middle East, finally picking up international audiences via Netflix. The enduring interest in her life indicates the power of her rags-to-riches story, and the huge political power she was able to amass within an extraordinarily male-dominated society.