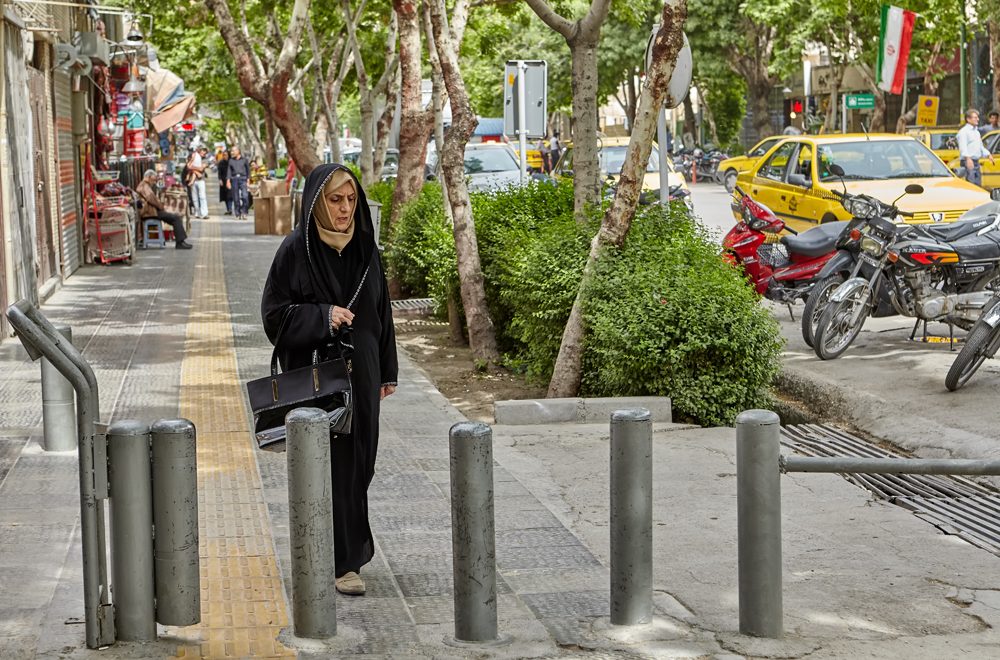 Her trembling hand reached for the telephone receiver. She called her daughter’s number. She was shaken – her heart was beating fast, her hands were cold, her wrinkled face seemed to have grown more wrinkles in just a few hours. Her head was throbbing in pain.

Her daughter Roya picked up the phone. It was too early in the morning for her mother to call – but not unusual, because she would wake up every day before dawn for the morning prayer. But that day, her mother had not slept a wink throughout the night.

‘Maman, is everything alright?’

‘Good Morning, darling. I just wanted to know if you’re home today so I can come over to your place.’

‘Of course, but what happened?’

‘I’ll tell you once I’m there – before your father gets up for his morning prayer.’

Akram khanoum rushed to pick up her shoulder bag, stuffing her praying mat and veil, her slippers and the plastic bag with all her medicine into it. The bag’s zipper could barely take the volume of its load, and refused to close.

“Damn it. Come on. He’s going to wake up any minute.” The zipper finally gave up.

She swooshed on her black chador veil that enveloped her petite figure as if she were about to vanish under its dark folds. Her large and thick glasses stuck out of the triangle that the chador formed on her face. She tiptoed towards the door, but paused and turned around to check if her husband, Akbar aqa had followed her. A cushion on the sofa was tipped over. It looked odd next to the other perfectly arranged cushions. She quickly removed her shoes and fixed the anomaly. She went back to the door and put on the slip-on medical shoes that her doctor advised her to wear. The doctor had strongly advised her to do fewer household chores.

‘At your age, you must put your feet up and rest. Stop scrubbing every corner of the house.’ But she could not bring herself to refrain from scrubbing and cleaning her spotless uptown house. This was her only way to distract herself from everything that was wrong in her life.

She walked out, pulled the door slowly closed. The latch bolt brushed on the surface of its opposite plate and slid into place. It did not click. She went to the nearest taxi stand, sat in a shared taxi and slammed the door shut.

At Roya’s house, everyone was already up. Her husband, Ali, was getting ready, and Roya was preparing breakfast. Akram khanoum had bought fresh bread on the way to her daughter’s house. No one asked why she was there early in the morning, at the breakfast table.

Roya fed her child, Elnaz, before sending her off to school. The son-in-law could guess the reason. His mother-in-law must have had a fight with Akbar aqa again. Ali found it odd that couples could still fight so hard at their age. They were in their 70s. But he also knew his forbidding father-in-law and his fiery temperament. He was frequently disappointed in his in-laws. His own parents had long since passed away.

‘Elnaz does not have grandparents to look up to,’ he once blurted out to his wife. Roya frowned but did not argue. Deep down she was embarrassed.

When the son-in-law and the grandchild had left, Roya turned to her mother and said: ‘Now, tell me what happened.’

Akram khanoum could not hold it anymore and burst into tears. She sobbed so hard she could not utter a single word. Roya panicked and brought a glass of water for her mother. She brought the glass close to her mother’s lips. Akram khanoum opened her mouth, sputtered but managed to swallow some water.

She calmed down as her daughter patted her on the back and said: ‘My head hurts so much.’ Tears trickled down, finding a path in the lines of her wrinkles.

‘Do you need an aspirin?’

‘It’s not a headache. Your father hit me in the head with his fist so hard yesterday that I thought I was going to die. He kept hitting me, saying I was planning to kill him.’

‘It’s my fate. It’s my destiny to live like this.’

‘Maman, tell me what happened.’

She sighed and took another sip of water.

‘You know how your father takes blood pressure pills. I have been going to the chemists to buy his medicine. I always took the doctor’s prescription with me. But I don’t know what’s written on it or on the pills. I can’t read. Your father has kept complaining in the past few months that the medicine does not agree with him anymore. Until yesterday, he found out that the pills the chemist gave me were not the right ones. He came home like an angry beast and beat me so hard. He threw me from one side of the room to another, hitting me hard on the head.’

‘Of course it wasn’t. He should have questioned the chemist. He should actually file a complaint against him.’

‘He went to chemists and the man apologised. That’s all. But he came home to take it all out on me. When he finished beating me, he left for Zahra khanoum’s house and came back very late.’

Akram khanoum had never heard of her husband raising his hand to Zahra khanoum. Akram khanoum would often wonder if her rival had a talisman or charm. But that day she was convinced.

Akram khanoum sighed : ‘This has been my ghesmat … my destiny… this is what God has meant for me.’