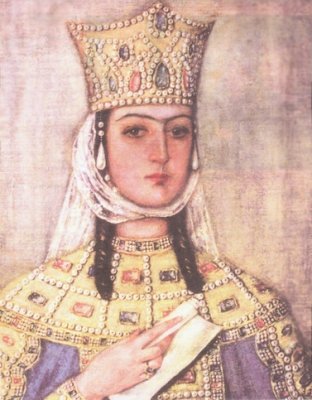 With a royal blow, she tore away the veil;
She showed her face’s sun from behind the screen.
The lioness showed so much force
that brave men bent low before her. — Amir Khusrau

Raziya Sultan was the Sultan of Delhi in India for four years from 1236 to 1240, as the first female ruler in Muslim and Indian history.

Her father was Shamsuddin Iltutmish. Born into slavery as a Seljuk Turk, he was son-in-law to Aibak, founder of the Delhi Sultanate whom he served as a regional governor. After Aibak’s own son was deemed incompetent, the Chihalgani – a council of 40 Turkish nobles – placed Iltutmush in the role of Sultan, when Raziya was five years old. Iltutmush governed the region after Aibak’s death, establishing a tolerant, multicultural state in Delhi and expanding his realm into India, while avoiding confrontations with the powerful Mongol Empire in Afghanistan.

His eldest son died in 1229 while governing the province of Bengal, and Iltutumish considered his other sons dissolute and unfit for governance. Instead, he chose Raziya, a well-educated and capable woman to succeed him, becoming the first Sultan to choose a female heir. According to historian Minhaj-us-Siraj, he stated that his daughter Raziya was the equal of 20 sons. Her youth had involved training in warfare and diplomacy by her father, and a trusted Abyssinian slave called Malik Yaqut. She had not been raised in a harem and lacked the modesty of her female contemporaries.

This decision was unpopular with the conservative and sexist Chihalgani. When Iltutumish died in April 1236, they defied his wishes and appointed her half-brother Ruknuddin in her place. Ruknuddin’s interests lay more in indulging his hedonism than ruling the state. He delegated this responsibility to his mother, a co-wife of Raziya’s mother. Within less than a year of this disastrous rule, both he and his mother had been assassinated. Raziya became ruler, taking the title of Sultan in November – insisting on taking a male title rather than one associated with being the wife of the true ruler.

Coins struck in her name bore the inscription ‘Pillar of Women, Queen of the Times, Sultan Raziya, daughter of Shamsuddin Iltumish’ reinforcing her claim to the throne. Like her father, she was tolerant of divergent religions and allowed Hindus to practice their religion freely. She wore male attire – a turban and trousers, with a sword at her hip – and is described as carrying out the affairs of state ‘in the manner of kings’. This included leading her armies into battle on the back of an elephant. When critics asked her to veil, she told them she could not, as she needed to be approachable to her people. Indeed, Raziya held open meetings to show accountability to the people she ruled over. She was also a canny political operator, deposing or neutralising rival leaders in Lahore and Multan, as well as her treacherous Grand Vizier.

She followed her father in expanding the borders of their territory, which grew to include parts of present-day Pakistan, Bangladesh and India under her rule. She also developed her state through building schools, academies, research centres and libraries, seeding the intellectual culture of the region.  She left Turkic influences within the culture of the Indian subcontinent, including aspects of Sufi philosophy. These educational establishments were also indicative of her tolerant attitude to diversity: Hindu studies of sciences and literature were taught alongside the Qur’an and Islamic philosophy.

However, male resentment over a woman assuming a monarch’s power had not diminished. Rumours circulated that Raziya had taken an Abyssinian slave called Jamal Yaqut, the commander of her horses, as a lover, likely to disparage her ‘honour’. She was forced to quell successive revolts from her rivals. In the last of these, one of the nobles – a former childhood friend called Altunia – conspired to replace her with her step-brother. Yaqut was assassinated, and Raziya was imprisoned whilst her step-brother declared himself Sultan.

Some accounts state that Razia married Altunia and that the couple attempted to reclaim the Sultanate, but were forced to flee after this proved unsuccessful. If so, he would have been with her when she was captured, robbed and murdered by Hindu Jats after her escape. Her step-brother, having none of her acumen for politics or warfare, was dethroned for incompetence, and the Sultanate of Delhi entered into a succession crisis that would bring Iltutmish’s brief dynasty to an end.

She is believed to have been buried at Turkman Gate in Delhi. According to Ibn Battuta, ‘A small shrine was erected over her grave, which is visited by pilgrims, and is considered a place of sanctity. It is situated on the banks of the Jumna, about a parasang from Delhi.’ More recently, a fictionalised version of her life was the topic of a TV series in 2015 showing her enduring importance in sub-Contintental and Muslim culture.