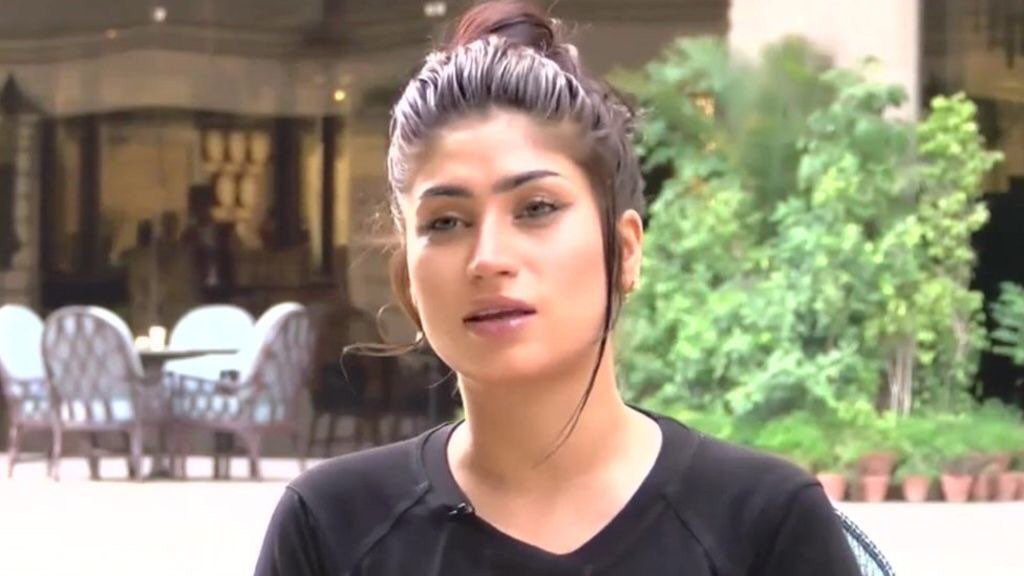 Qandeel Baloch was the stage name of Fouzia Azam, Pakistan’s most notorious internet celebrity. She became an icon for women and Pakistan’s lower classes through her spectacular rise to fame, and her challenges to Pakistani cultural norms. Her murder – a so-called ‘honour’ killing – exposed the fault-lines of a society torn between tradition and modernity.

Qandeel was born in the Multan region, in the village of Shah Sardar Din, an underdeveloped area where most families are supported by a relative working out of the area. A bold and reckless girl, she enjoyed physical activities such as swimming, cycling, climbing trees – and particularly, dancing. After her family acquired a television, Qandeel’s ambitions were firmly set upon stardom.

However, at 17, Qandeel was married off to her cousin Ashiq Hussain, pressurised into the match by her father. The marriage was turbulent, and Qandeel described experiencing violent abuse. She accused her husband of threatening to throw acid in her face, and of burning her with cigarettes. A few years after the wedding, she left her husband, taking her son Mishal with her. They were lodged in Multan’s run-down domestic violence shelter. Conditions were harsh and the baby became poorly. With no support from her family, she had no option but to return her son to his father’s custody. She would never see him again. Upon leaving the shelter, Qandeel worked as hostess for a coach company for a while – one of the few available jobs for women in her region. But she had far larger ambitions.

She moved to Islamabad and changed her name, putting her past as Fouzia Azam behind her. By 2012 she was taking her first acting roles as minor characters in soap operas in Karachi. In 2013, her startling but unsuccessful audition for Pakistani Idol went viral on social media, bringing her to the attention of a much wider audience. This drew attention to her charismatic presence on social media, where she began to craft the Qandeel Baloch persona. Through short videos, she constructed artful fantasies of intimacy which were frequently sexualised, yet also charming and quirky. Her catchphrase ‘How I’m looking?’ encapsulated both the self-involvement and insecurity of the selfie generation.

A genius at self-publicity, she launched a humorous campaign to marry Pakistani president, Imran Khan, then the leader of the opposition, in 2015. She went on to dedicate a video in support of Valentine’s Day to him, in a country where even celebrating a holiday considered ‘Westernised’ is a social minefield.

In 2016, she further pushed the boundaries of Pakistani mores by promising to perform a striptease for the Pakistani cricket team if they won – an imitation of Indian social media personality Poonam Pandey. The outcry was enormous; since Pakistan lost, she did not need to carry out her pledge. She was characteristically defiant: ‘I only feel sad from the bottom of my heart that I put out a trailer for such a loser team.’

A month after this, she was invited to appear on a humorous talk show called Ajeeb Sa. The other guest was Mufti Abdul Qavi, a seemingly affable media cleric from Multan who refused to condemn Qandeel, seemingly unaware of her controversial behaviour. Later, they met privately. A consummate self-publicist, Qandeel shot a selfie of herself alongside the rumpled Mufti, flirtatiously wearing his karakul hat and feigning a shocked expression. She would later claim that he had attempted to seduce her, creating a pubic scandal that pulled the two media figures into public conflict.

Qavi exposed the fact that they were both from the Multan region, providing a clue for journalists who were beginning to take an increasing interest in Qandeel. Her real identity – as Fauzia Alam from Multan – was revealed by a local journalist. Her passport and identity card were shown on the news, exposing her family to criticisms in their community. Always controversial, Qandeel came under increasing harassment. For Qandeel, abuse was water off a duck’s back, but the hypocrisy stung. Qandeel had attempted to expose clerical hypocrisy, yet she had herself become the target of accusations of dishonesty, due to her attempts to protect her family from aspersions of immorality in a society obsessed with ‘honour’.

From this point, Qandeel found the backlash overwhelming. She retreated to the new house she had bought her parents, looking for some respite from the constant media pressure. This was no escape, however. On the night of the 15th July, her brother Waseem drugged his parents into unconsciousness. Qandeel was strangled while they slept. Waseem took responsibility for the crime, giving a press statement citing media pressure as his justification.

From its inception to its termination, Fouzia Azam’s existence as Qandeel Baloch was bookended by male violence. She was buried at a small funeral which only a few people dared to attend; her grave remains unmarked. A day before the murder, Qandeel had posted an appeal for female solidarity: ‘As women, we must stand up for each other… As a women, we must stand up for justice.’

For many Pakistani women she was iconic, representing their suppressed desires for self-expression and celebrating their own sexuality, and their resentment at bearing the twin burdens of family and national ‘honour’. The case also led to a toughening of crimes around so-called ‘honour’ killings in Pakistan, removing the ability of relatives to forgive the murderer and decrease his sentence. Pakistan’s Friday Times described her as ‘[a] talented, self-made artiste who tested the limits of our sensibilities, and who came to embody, in her colourful life and terrible death, the lingering chasm between our social media and our social reality.’