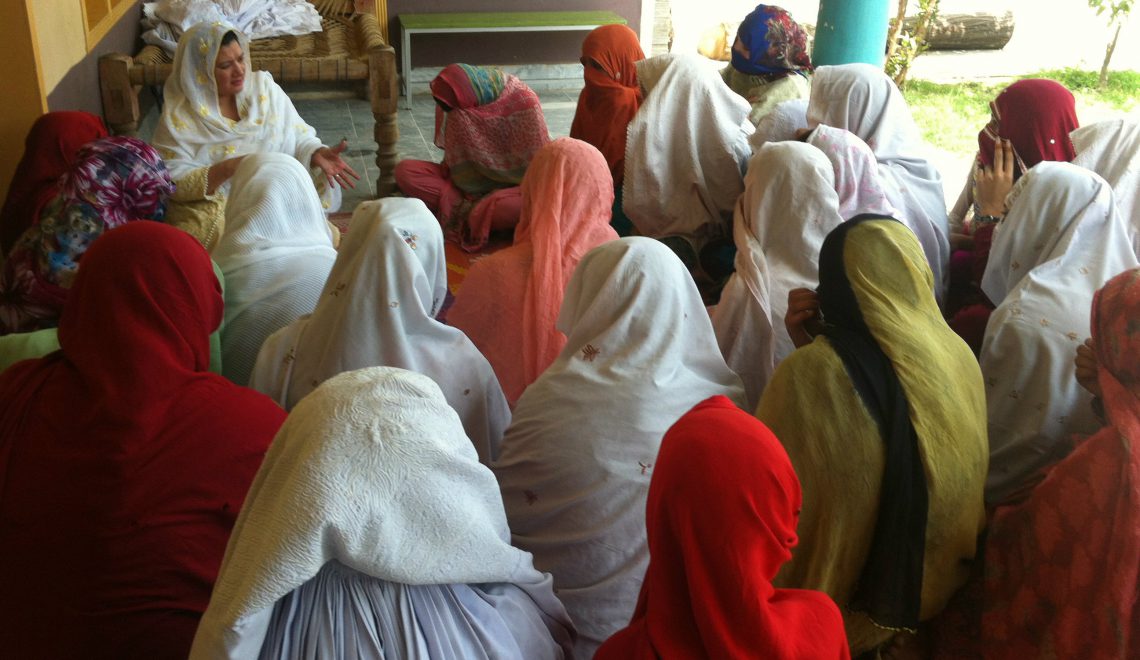 ‘All women are working women… only a few are salaried’

This year, in Pakistan, Pashtun women decided to be a part of the Women’s March on International Women’s Day after hearing about it from other women via social media. The Women’s March sprang up organically, beginning in Hyderabad and Karachi and spreading to Lahore and Islamabad. This wave of activism inspired women in Peshawar. There was no specific banner, and no particular organization to support it. Women just kept calling each other. They expected just a handful of women to be present at the march. But on the day, they were surprised to see a large crowd of women from many different backgrounds gathered at the Press Club in Peshawar to be a part of their own Women’s March.

Pashtun women came out on the streets to emphasise the issues that they face at the grass-roots level, especially in Khyber Pashtunkhwa and the erstwhile Federally Administered Tribal Areas. Pashtun women, who have been the victims of patriarchy and poverty for centuries, are now also burdened with trauma caused by terrorism, as well as added issues caused by the ‘war on terror’, which has devastated their normal lives, driving some into camps where they live as ‘Internally Displaced Persons’.

These women have been silenced once again, drowned out by the noise of the controversy over a few placards which were deemed to be provocative. The voices of Pashtun women are already muffled due to the effects of patriarchy, class discrimination and a lack of access to media and policy makers. They were once again suppressed by the noise around placards, made by misogynists and elitists who have limited knowledge of the intensity of women’s issues at the grass-roots level. History will never forgive them.

Pashtun women are facing issues which are much more serious than those faced by women in rest of the country and which need serious attention. These issues stem from patriarchy and poverty, and they are multiplied by the impacts of terrorism and the ‘war on terrorism’. Deep-rooted patriarchal structures have enmeshed Pashtun women in a web of customary practices called riwaj – such as swara (forced or compensation marriage used to resolve a feud), walwar or rasnama (bride-price), ghag (men creating a public disturbance in order to claim a woman for marriage without her consent), ‘honour’ killing to protect the man’s nang (honour), miratah (women who have no male relatives such as a husband, son, brother or father, whose property is distributed amongst other men of the family).

Financial discrimination against Pashtun women is not addressed. They do not get the rights of inheritance or dowry given to them by the constitution and by Islam; especially tribal women who are kept deprived of their inheritance by a practice called shamilat (jointly owned property) which is distributed amongst men only through a custom called wesh (distribution). These are some of the core patriarchal practices which are unconstitutional, but which Pashtun women still face, and which have not been widely addressed.

There are many other patriarchal issues which are unconstitutional but are still in practice, such as forced marriage and barriers to girls education (as demonstrated by the case of Malala Yousafzai, who was part of Swat’s Pashtun community), the right to work, the right to vote (e.g. in Dir, women were deprived of the right to vote by the mutual consent of a majority men through a local jirga), and the right to stand for election. An increased representation of Pashtun women in parliament and other forums would form an important part of decision-making process, unlike the jirga system, which is a male-centric gathering which makes decisions about women without either their consent or their participation.

These patriarchal issues are deeply interwoven with poverty: these impact upon physical health through poor maternal healthcare, a lack of family planning and maternal leave, and hospitals with insufficient staff and supplies; they impact upon mental health through a lack of trauma counselling centres. There are several other social issues; few recreational spaces, ‘ghost’ schools, families with members who have gone missing, lack of environmental protections amongst many more.

There is a great vacuum of resources for Pashtun women, particularly those who are not educated, widows, orphans and those who want to earn their own money through business. They need guidance, opportunities and networks to enable them to participate in society.

This is why Pashtun women need special attention from policy makers. As well as facing the challenges of patriarchy and poverty they have also been dealing with the added burden caused by terrorism and the ‘War on Terror’ (also known as the ‘Global War on Terrorism’) for more than a decade. They have been made widows and orphans; and they have been injured and left disabled; they have been forced to leave their homes and become ‘Internally Displaced Persons’. They have had to face losses in the areas of health, agriculture, the economy and property, as well as irreparable losses such as mortalities. Their children face an education gap. Both terrorism and the ‘war on terror’ have led them to suffer psychological trauma, including phobias and insecurities, with long-lasting effects enduring into the present day. These unheard Pashtun women are crippled by a lack of social capital, meaning that many individuals and policy makers are unaware of the situation.

The Women’s March was a great opportunity to bring forth all these problems to the world. The Pashtun Women’s March could also draw the world’s – and the policy makers’ – attention towards the issues of non-Muslim minority women living in Khyber Pakhtunkhwa and the erstwhile Federally Administered Tribal Areas, such as the occupation of their places of worship by land mafia, the targeted killing of their relatives, and to promote their employment and education and enforce quotas for their political representation,

Attention has been diverted from these crucial women’s issues towards a false representation of the march created by misogynists as being anti-male, which ignored hundreds of placards emblazoned with women’s core issues.

The Women’s March is against patriarchy: it is against the misuse of power in society. It is not only women who are victims of patriarchy; men, children, members of minority groups, elders, animals and the environment all are victimised. The Women’s March is an invitation to all of these victims to join us and to work together to fight and to draw the state and governments’ attention towards all the many problems in Khyber Pakhtunkhwa so that they can plan their policies accordingly, and find solutions. The government particularly needs our guidance to identify post-merger issues emerging in the erstwhile Federal Administered Tribal Areas and to provide insights into all of the above mentioned women’s issues. As women’s rights activists, it is our duty to correct the misrepresentations, and demand that political focus is directed towards all of problems faced by all women in all classes, especially those at the grass-roots level who face the most intense difficulties, rather than prioritising policies which are exclusionary and elitist. The Women’s March provided many Pashtun women with a valuable opportunity to show their sisterhood and solidarity in raising these critical, yet ignored, issues.