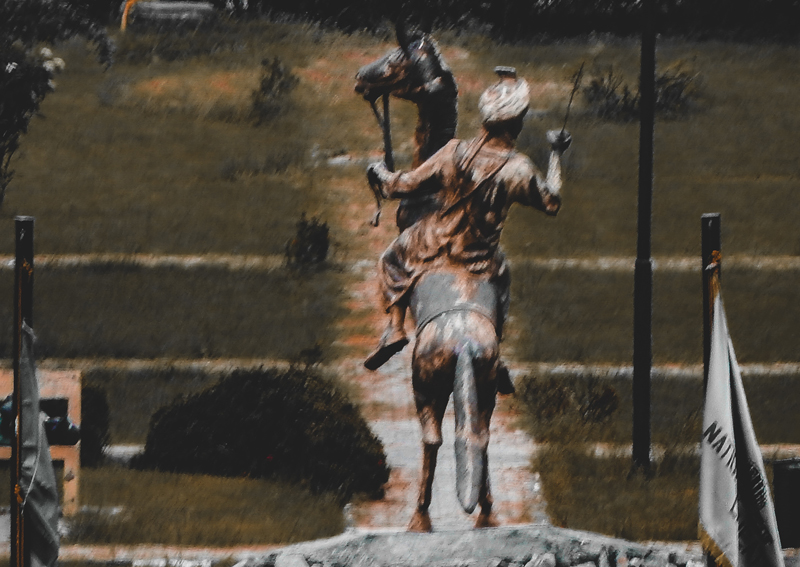 Strange things have happened in the history of the seven Hausa States, and most strange of these is the extent of the possessions which God gave to Aminatu, daughter of the ruler of Zazzau. She waged war in the Hausa lands and took them all so that the men of Katisna and the men of Kano brought her tribute. She made war in Bauchi and against the other towns of the south and of the west, so that her possession stretched down to the shores of the sea – Sultan Bello of Sokoto

Amina (also known as Aminatu) was a queen of the Hausa city-state in Zazzau (now known as Zaria) in north-west Nigeria. She is one of the most famous African queens, known for her military acumen. Traditional Hausa songs describe her as ‘Amina, daughter of Nikatu, a woman as capable as a man.’

The collapse of the Songhai Empire had left a power vacuum in which small city states flourished. Zazzau was one of these, with a wealth drawn from commerce in leather, cloth, kola, metals and horses. Amina’s mother was Bakwa of Turunku, who was the Queen Regnant of Zazzau. She ordered the construction of the city of Turunku while she was fighting the Nupe, and also built a stronghold on the river Galma. She named her second daughter Zaria, which would also become the name of the region’s capital.

According to legend, Amina was the favourite child of her grandfather, Zazzau Nohir. It is rumoured that she held a dagger in the manner of a warrior from her early childhood, showing her readiness for battle.

At the age of 16, she was named as heir apparent and given control of 40 slaves and the governance of a ward of the city, where she convened daily council meetings. Due to her wealth and status, she had numerous suitors. For instance, the Emir of Kano offered her 100 slaves – 50 of each sex – and fifty bags of blue and white cloth. However, Amina refused every on one of them, and never married or had children.

After the death of her mother, Amina’s brother Karama became King. Amina supported him, serving as an outstanding warrior in his cavalry. When he died in 1576, Amina ascended to the throne, ruling over the largest Hausa State, and the main source of the Nigerian slave trade. Within months of her coronation, Amina established herself as an aggressive, military leader, calling upon her people to ‘re-sharpen their weapons’.

Almost immediately, she launched into military campaigns to extend her clan’s territory. She commanded an intimidating force of a thousand-strong cavalry and 20,000 foot soldiers. She also developed metal armours, including iron helmets and chain-mail, for her armies. She is also credited with ordering the construction of distinctively Hausa fortifications known as ‘Amina’s Walls’, and introducing the farming of kola nuts to the area.

Her military power enabled her to capture large tracts of land and add them to her domain, assuming control over the region between the Niger and Benue rivers, absorbing the states of Nupe and Kwararafa. She created trading routes to and from Zazzau, controlling the road from Gwanja, and siphoning off trade from the other Hausa city states, Kano and Kitsina, spanning the trans-Saharan axis. She also enriched her kingdom through demanding tribute from her vassals. The King of Nupe, for instance, provided her with forty eunuchs and ten thousand kolas. Her reign marked an expansion in Hausa trade, where smiths, weavers, dyers, tanners and leather-workers were in huge demand.

For the 34 years of her reign, she was constantly engaged in expanding her kingdom and its power. According to legends – which may reflect an erotised fear of independent, successful and aggressive women – she remained unmarried through taking a captive to her bed each night, and killing him the following morning.

It is rumoured that she died in battle at Atagara, near Bida. As a female warrior queen, Queen Amina became iconic as a female warrior who lives on in Nigeria’s oral traditions. She is also recognised as a ruler who came the closest to uniting Nigeria across the country’s history. There is a statue of Amina at the National Arts Theatre of Lagos State, a Nigerian stamp has been issued depicting her, and many schools are named in her honour.