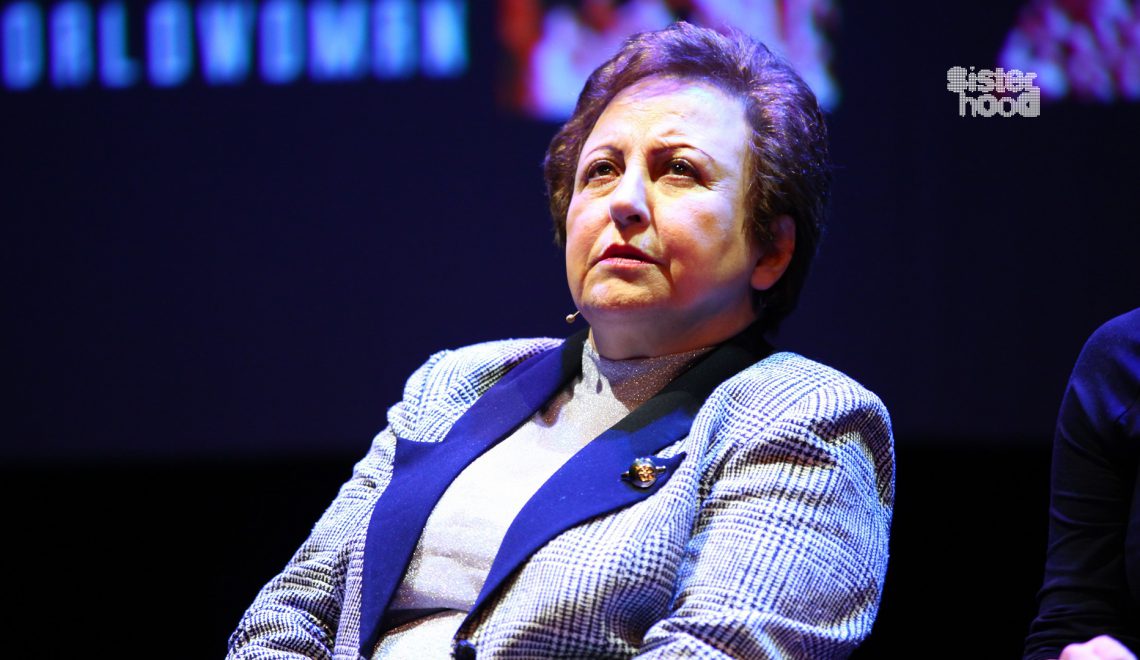 ‘A quest for new means and ideas to enable the countries of the South, too, to enjoy human rights and democracy, while maintaining their political independence and the territorial integrity of their respective countries, must be given top priority by the United Nations in respect of future developments and international relations.’ Shirin Ebadi, Nobel Lecture 2003

Nobel laureate, lawyer, judge and human rights activist Shirin Ebadi was born in Hamedan, Iran in 1947, but raised in Tehran. Shirin was always considered the equal of her brother growing up in the family home, due to the influence of her father. Despite her father’s links to the Mossaddegh administration, which caused him to lose his position after the CIA-backed ouster in 1953, Shirin was largely shielded from the political turmoil of contemporary Iran through childhood.

As she progressed through her law studies and became engaged in student politics, marked by protests and activism. Shirin became a judge in 1970, at just 23 years of age, continuing to write legal papers, and meeting Javad Tavassolian, the man she was to marry. As the decade advanced, the cracks in the rule of the Shah were becoming more and more apparent due to the excesses of the court which were shocking to conservatives, alongside his increasingly authoritarian rule, which eventually resulted in revolution.

Shirin’s initial hopes for the revolution were dashed when she perceived the growing restrictions upon women’s liberties. After a month’s visit to America for medical treatments, she returned to a very different Iran which then plunged into the horrific siege of the US Embassy, an event which would set the scene for Iran’s relations with the West for decades.

In 1980, at six months pregnant, Shirin was stripped of her status as judge. Soon after this, Iran’s secular legal code was supplanted with a seventh century understanding of Islamic law, which set a woman’s worth as half of that of a man, and which reinstated stoning and amputation as legal penalties. Next, Iran became embroiled in an eight-year war with Iraq, where the rising fundamentalism of the country was reinforced by wartime patriotism. Meanwhile Iranian newspapers published pages containing lists of names of counter-revolutionaries executed by the regime. Her brother-in-law Fuad was one of these: arrested and later executed for his political connections. Fuad became the first of many political prisoners that Shirin would work with over her career.

Forced out of the law, Shirin dedicated her time to raising her two daughters in Iran, while many Iranians, fearful of both the war and the fundamentalist government, sought sanctuary outside the country. Shirin continued to live in a state that was growing more repressive by the day, where everyday citizens could find themselves accused of un-Islamic behaviour, and summarily punished, on the flimsiest of justifications. After the war, when women were once again allowed to practice law in Iran Shirin took on cases which exposed the Islamic State’s prejudice against women. One of these was the rape-murder of Leila Fathi, a Kurdish 11 year old, in which Leila’s parents were required to pay ‘blood money’ to secure the executions of the her murderers. Despite Shirin’s best efforts, the case was never resolved, although she wrote a blistering critique of the practice: ‘If a woman with a PhD is run over by a car and dies, and an illiterate thug gets his testicle hurt in a fight, the value of that woman’s life and that thug’s testicle are equal. Is this,’ she wrote, ‘how the Islamic Republic regards its women?’

The next high-profile case also explored an aspect of Iran’s post-revolutionary law – the awarding of the custody of children to their fathers after divorce as a matter of principle. The tragic and cruel death of Arian Golshani, a nine-year old starved and beaten to death by her father was a painful illustration of the outcomes of this patriarchal law. Shirin’s campaign for justice for Arian was broadcast on CNN and contributed to her becoming an international name in human rights.

The following decades in Iran were an era of political assassinations, abductions and forced confessions through psychological torture, during which Shirin continued to challenge various injustices and the state’s use of Islam to justify repression. In 2003, Shirin’s work was recognised by the international community who awarded her the Nobel Peace Prize. Although this provided her with the financial support to open a human rights centre, it also brought her under official scrutiny as never before. The effects of surveillance and spying put pressure on her marriage. Shirin’s husband was seduced in a ‘honey trap’ operation which effectively ended her marriage. The human rights centre was closed through a combination of bureaucratic manoeuvring and brute force. Finally, in 2009 Shirin was out of the country that she had steadfastly refused to leave, she was forced into exile, with the threat of the notorious Evin prison if she returned. From a base in London, she continues to raise awareness of injustices in Iran, continuing her life’s work.

For her constant determination to confront injustice, Shirin Ebadi stands as a truly inspirational symbol of women’s activism and resilience in the most inhospitable climates, facing down oppression with courage and an uncompromising sense of justice.