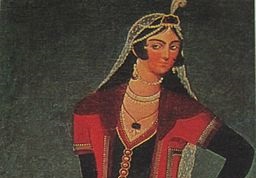 Sitt al-Mulk (Lady of the Empire) was the daughter of the fifth Fatimid caliph Nizar al-Aziz Billah and a Christian mother with Byzantine heritage. Al-Aziz’s tolerance for diversity extended beyond his private life: despite criticisms, under his rule non-Muslims were granted privileges they never had before and attained a high level of political participation. Sitt al-Mulk’s maternal uncles held the positions of Patriarch of Jerusalem and Alexandria in the Melkite Orthodox church, thanks to the sponsorship of her father.

In 973, the Fatimid court relocated from Tunisia to Cairo which became its new capital. Here, Sitt al-Mulk grew up as the daughter of a father who, according to contemporary chronicles ‘adored her mightily and denied her nothing’. Besides a lavish lifestyle, as owner of a reported 4,000 female slaves, Sitt al-Mulk was often consulted on affairs of state, giving her an initiation into leadership from an early age. Her father died in 996 whilst on manoeuvres against the Byzantine Empire.

Sitt al-Mulk was 25 when her father died and her 10-year-old half-brother Hakim bi Amr Allah ascended to the throne. Contemporary rumours suggest that at this point, she attempted to stage a coup and seize the throne on behalf of a paternal uncle. The plot was foiled when she was arrested by Barjawan, a court eunuch who was al-Hakim’s tutor and who would become prime minister under his rule.

After Barjawan was assassinated in 1000, Sitt al-Mulk gained influence over the young caliph, helping him negotiate an empire which was stumbling from crisis to crisis. Over the next 25 years, however, al-Hakim proved to be an eccentric leader. He was virulently misogynistic: one of his acts was to forbid cobblers from making shoes for women, in order to restrict them to their homes. Sitt al-Mulk herself sheltered one of al-Hakim’s wives who was escaping his persecution. In 1004, al-Hakim ordered the destruction of the Church of the Holy Sepulchre in Jerusalem in 1009, and imposed restrictions on the behaviour of both Jews and Christians, destroying their churches and monasteries. Sitt al-Mulk herself had always maintained close connections with her mother’s Christian heritage. Al-Hakim’s obduracy and bizarre behaviour led to the disintegration of his relationship with Sitt al-Mulk – which was reflected in the assassination of several of her allies by his forces.

In 1021, al-Hakim disappeared while on one of this habitual night-time walks around the city. After forty days, he was declared dead. Abbasid sources describe this as an assassination organised by Sitt al-Mulk with the help of collaborators in the military, although there is no conclusive evidence to prove her complicity. After al-Hakim’s death, she declared his 16-year old-son al-Zahir as caliph, and installed herself as his regent. Despite being under suspicion of having had al-Hakim murdered, she was able to take up a position as a regent of the empire due to her popularity and al-Hakim’s divisive rule. Dissenters were assassinated with an efficiency that left some nostalgic for al-Hakim’s reign.

As regent, she worked to undo al-Hakim’s legacy. This included rebuilding a church in Alexandria which he had ordered to be destroyed, and restocking it with supplies from legacies from her maternal family. She also re-established the commercial taxation system which al-Hakim had abolished, released women from the confinement of their homes, allowed them to wear jewellery once more, and reversed his bans on music and wine and Christian and Jewish worship. One of her most important political undertakings was to reduce tensions between the Fatimid and Byzantine Empires by attempting to find a solution for the disputed territory of Aleppo. The more equitable treatment of Christians under her rule and her own personal connections provided hope for some rapprochement between the imperial powers; however she died before negotiations were completed having served just two years as a regent.

Although she was never formally instated as a caliph – this being an entirely male title – Sitt al-Mulk effectively ruled one of the most significant empires of the Middle Ages, working to repair the damage caused by her erratic half-brother and promoting diversity and peace, and has left a legacy that far outstrips the period of her brief reign. An elegy for her death by poet ‘Abd al Rahman al-Mutabbib reads:

Living under the shadow of Sitt al-Mulk
We have shared the comfort of its shadows
…Don’t be surprised by the night-like gloom of today
[from] what were yesterday’s gifts from her.