Stemming the tide of the biggest threat to women’s rights

Despite turmoil, danger, and oppression, women in the Middle East and North Africa are not succumbing—instead they are resisting. Women are claiming new public spaces, fighting back against discriminatory systems and laws, and raising their voices on topics that were once taboo. At the heart of this resistance lies the issue of gender-based violence.

“Violence is widespread my community,” says Noha, a 21-year-old Egyptian woman who participated in trainings with the Center for Egyptian Women Legal Assistance Foundation (CEWLA). Noha says that through CEWLA she learned about her rights, and now understands that there are many levels of gender-based violence, large and small. “In the street, sexual harassment is very, very common. This is violence against women. Beating in the house is violence. I can’t go out by myself, especially at night, because of lack of security; this is violence. I can talk and say my opinion, but at the end because I’m a woman my opinion is not respected; this is also violence. I consider a lack of information as violence. Depriving me of knowledge is violence.”

Women’s human rights organizations in the region agree that women and girls like Noha are demanding their rights more loudly than ever before—but as a result, the risk of violence against women has increased. Melek Ozman is the coordinator for the Filmmor Women’s Cooperative in Turkey. For the past 14 years, FIlmmor has run a film festival that travels throughout Turkey featuring documentaries about femicide (the deliberate, violent killing of women) as a strategy to raise awareness and mobilize new activists. “If you ask the question, ‘Why is there an increase in femicide?’ I would say that one of the reasons is because women are resisting against men more than they used to,” says Melek. “Especially in the Middle Eastern region, women are demanding their emancipation. And men, on the other hand, are resisting against this and becoming more and more conservative.”

Still, as patriarchal society pushes back against women who are resisting, Noha says she has hope for the future—especially with women at the helm. “We as women are the ones who can change such ideas [about violence], because women are the pillars of society. Yes, violence will be changed—when women are educated, when we know our rights, when we attend more trainings like [the ones at CEWLA], so we feel like we have the power for changing such violence. And we will.” 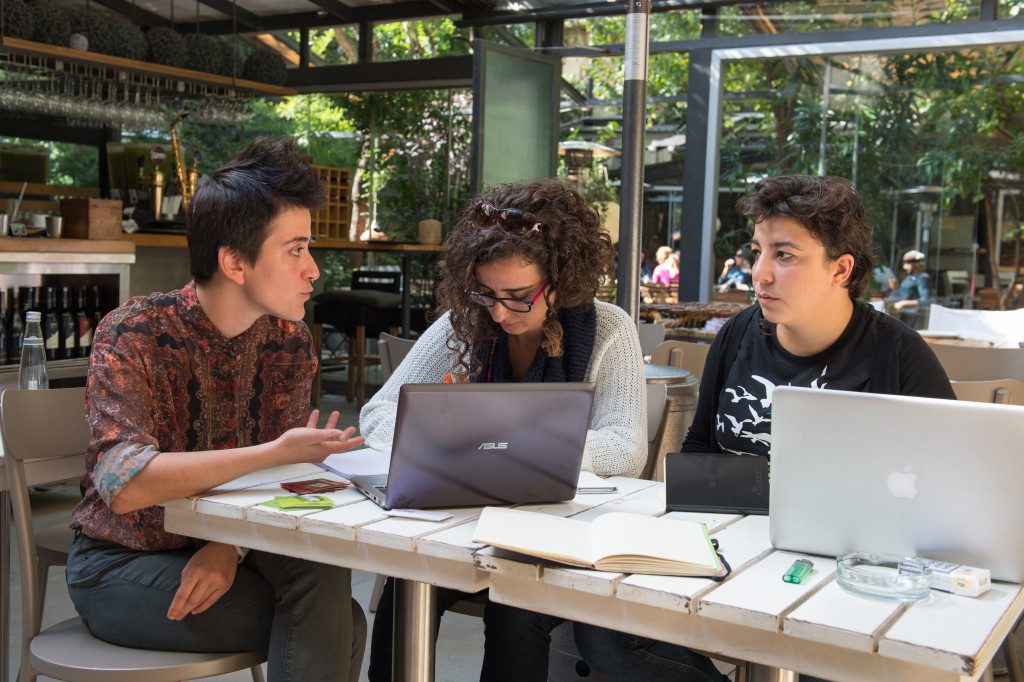 Women’s groups throughout the region are trying to remove the taboo of talking about violence against women, including the organization Struggle Against Sexual Violence, which offers educational programming across the country, including small towns, for women about sexual harassment and sexual violence.

Indeed, women’s groups in the region are reporting crucial gains in public awareness, efforts to change norms around violence against women, and passing new laws that protect women.

“When I started working on violence against women 11 years ago, it was catastrophic,” says Raghida Ghamlouc, a social worker with the Lebanese Council to Resist Violence Against Women. “There was no infrastructure in Lebanon, no talk about [violence against women] in the media. Now it is very different, a 180-degree change. The media is making it a priority to highlight [violence against women]. Before it was completely missing in the minds of the community, of society as a whole. Talking about this issue was a taboo; now it is not. Now, we have a law [condemning violence against women]; we have several NGOs working on the issue, not just one NGO. For a long time we were the only one. We are now even starting to involve men in our cause, which shows a big difference.”

Removing some of the taboos around violence against women and changing harmful norms (including victim-blaming and the expectation that women remain silent if they experience violence) is encouraging more women to speak out. Women’s groups in the region see that more women are now reporting violence to the police—something that would not have happened even five years ago in many countries in the region.

A new law in Egypt, for example, criminalized sexual harassment, and many women’s groups are seeing the impact. “We started to hear about girls that go to the police to report sexual harassment in the streets for instance,” says Yara Fathi Abdel-Salam, who works with the group Appropriate Communication Techniques for Development (ACT). “This was a result of the modification that took place in this law, and also from raising awareness among girls and women that there is a law now that criminalizes these actions. This would not happen before, that a girl would go to the police to complain about the sexual harassment incident. But now, step by step, we start to hear about complaints raised to police.”

The staff of Filmmor in Turkey

As public outreach and advocacy become more important to changing laws and social norms around violence against women, women’s groups are pursuing unique and creative strategies to reach new people.

“Turkey is a heavily traditional society, but the dynamics are changing. People are open and hungry for information,” says Alin Tasciyan, program advisor for Filmmor. Filmmor’s strategy of using films to raise awareness about violence against women attracts more people, including those who might not otherwise be interested. “We strongly believe that informal way of education is our most powerful activity. Via these documentaries, we aim not to entertain the audience but to educate them in an informal way.”

While groups like Filmmor turn to creative strategies, others are using technology to reach more people and raise the voices of women survivors of sexual harassment. HarassMap is an Egyptian group that has been working since 2014 against sexual harassment. The group operates a website where women can report incidents of sexual harassment, which are then mapped online. (Women can also send incident reports through Facebook, Twitter, and SMS.) “When we launched five years ago, it provides a space for women to talk about harassment. This kind of space did not exist before,” Noora Flinkman, Marketing and Communications Manager for HarassMap. “It also helps us gather data on this issue—it helps us show that this is actually happening. For a long time there wasn’t any evidence of the magnitude of the problem but now we have data to show it.”

In fact, a 2013 study by UN women showed that 99.3% of women had experienced sexual harassment. “Sexual harassment is very normalized and socially accepted. It affects mobility, sense of safety and security, the ability to perform well whether it’s in your workplace or at school,” says Noora. “Not feeling safe restricts women in so many ways, including in political life and social life, so of course it restricts women on an individual level but it extends to the larger society.”

Two steps forward, one step back

Despite substantial gains thanks to the dauntless efforts of women’s groups, there are also severe obstacles against greater protections for women, particularly from fundamentalist governments. “The influence of political Islam is making us unable to breathe,” says Melek Ozman of Filmmor in Turkey. “Those who are conservative and religious have so much power, and I don’t believe that they’re for democracy. I think that they are more for a dictatorship.”

Similarly, in Iraq, women’s groups report that extremist governments are cultivating a society where violence against women is acceptable and even legal. “We have many kinds of violence we undergo and we know the source that is making this violence worse, and it’s the political tendency of Islamic extremists reaching to power,” says Yanar Mohammed, President of the Organization for Women’s Freedom in Iraq (OWFI). “Some of these parties have shown us a terrible example of what they want to bring to Iraq, including legislating for a law that allows the marriage of a 9-year-old girl to an adult man. It legalizes pedophilia in Iraq and allows men to be polygamous, and allows many rules for getting rid of wives if they are not sexually pleasant for men. The amount of humiliating material in this law against women is incredible, and out of this age. It’s something that modern humanity cannot even bear to hear of.”

Additionally governmental barricades against women’s human rights work (such as the barriers the government is putting up for women’s groups in Egypt) are reported by grantees throughout the region. Yanar Mohammed has experienced intimidation and threats from the government in her work providing shelter for survivors of domestic violence and preventing trafficking of women in Iraq. “Although we are protecting women from violence which is trafficking and domestic violence and all that—although we are doing the duty of the government, the duty that they are not taking seriously and do not want to move on, and although they should be supporting us and applauding us for doing their job, in reality they confront us. They tell us that our sheltering of women is promoting promiscuity, that it is encouraging women to go against their families and have full sexual freedoms and come stay in our shelters. So some governmental officials have intimidated us in the past, telling us we are doing something illegal, when we are protecting women.”

Women are the key

Just as women are the targets of gender-based violence, so are they also the key to progressing women’s human rights in the region. Despite substantial challenges, women are continuing their work to win rights for women and reduce violence against women. “We find that we have to find our own forms of feminist resistance and use it in any way possible,” says Yanar Mohammed.

“We strongly believe that women are the progressive part of society. Progress really comes from the women,” says Alin Tasciyan of Filmmor. “Whatever happens positive in Turkey, the people who encourage the change are always women.”