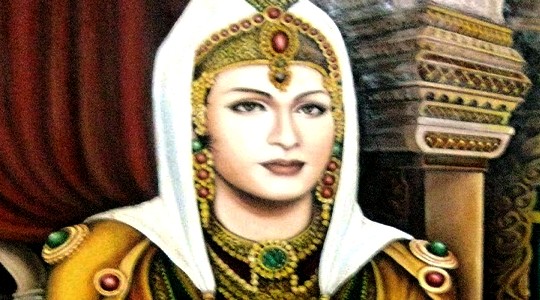 Sultanah Taj ul-Alam Safiatuddin Syah was the first of four successive queens of the Sultanate of Aceh Dar al-Salam, an Islamic kingdom to the north of Sumatra. Her father, Iskander Muda had conquered Pahang on the Malay Peninsula in 1617, raising the son of the former ruler as his own. When the boy, named Iskander Thani, reached nine years of age, Muda married him to his daughter Putri Sri Alam. Upon Muda’s death, Thani ascended to the throne. The young sultan died unexpectedly, possibly as a result of an assassination. He had been an unpopular leader, due to his foreign birth, profligate lifestyle and the brutality of his rule, during which he had arranged the assassination of as many as 400 potential rivals. This meant that Thani’s death left a power vacuum and an unclear line of succession.

Unusually, his widow was selected as ruler in the place of the unpopular alternative for succession: one of Thani’s surviving, foreign-born relatives. She took the throne just three days after his death, following debates about the permissibility of a female leader within the rules of Islam. She exchanged her original name Putri Sri Alam for the title of Sultanah Taj ul-Alam Safiatuddin Syah, meaning ‘world crown, purity of the faith.’

It was ruled that, as a woman, she could not wield spiritual authority within Islam, so Safiatuddin took authority as a purely secular leader of Aceh and its vassal states. Nevertheless, Safiatuddin is recorded as a deeply pious woman, who never failed to pray five times a day nor fail to honour the Ramadan fast. She also issued rulings and received supplicants and performed the other business of court from behind a curtain in order to respect Islamic practices of modesty. This did not prevent her from enjoying outings; foreign envoys describe her as enjoying hunting with her entourage and attending ceremonial events riding on the back of an elephant.

Safiatuddin’s rule took place during a complex and challenging period: Aceh was a busy trading port facing colonialist pressure, primarily from the Dutch East India Company (VOC), and also oversaw its own vassal states. The most important of these was Perak, the fourth largest state in Malaysia which contained valuable tin resources. Aceh was the leading Muslim commercial centre in the whole Mediterranean region and a major trading centre for pepper.

Her reign began with the organisation of a lavish funeral for her late husband, featuring a procession of 260 elephants, as well as rhinoceroses and Persian horses, and entertainment from Javanese, Chinese and Indian minority communities. After the burial, cannons were fired and mourners cheered the new Sultana. From the outset of her reign, she was confronted with a diplomatic quandary. The VOC demanded payment for a costly jewellery set which had been commissioned by the former Sultan, her late husband. Safiatuddin, who took a more prudent view of the Aceh’s finances, refused to accept the jewellery, reasoning that it was designed for a man and was therefore of no use to her. Representatives of the VOC pressed for payment nevertheless. After dragging out the affair for four years, and dealing with several envoys sent from Holland, Safiatuddin ultimately negotiated a settlement which ended hostilities and allowed the VOC to cut their losses. She did not entirely allow them to save face, however. After paying off the balance, she ordered the Dutch ambassadors to dance for her. They reluctantly complied, to the amusement of the court.

A further crisis erupted later in her reign. The VOC were becoming more aggressive in seeking to monopolise the tin resources in Perak, blockading the Perak River. On the 6th of May 1651, the yacht blockading the river reported that the crews of two Dutch ships had been massacred and the VOC warehouse looted. The Dutch commissioner pressurised Safiatuddin to investigate the affair, suspecting Acehnese collaboration, calling for assurances of safety, compensation for their losses and justice for their dead. This left Safiatuddin pulled between protecting Aceh, supporting Perak, and maintaining peaceful relations with the VOC. She ordered the release of the handful of Dutch citizens who had escaped the massacre, and the punishment of a few of the rioters, sparing her ally the Sultan of Perak. She warned the Dutch against any further intervention: ‘Commander, you should not wage war against those in Perak, because it is my land. I myself will punish those who have caused trouble… That is a promise, because I am powerful enough to do that. You should not do anything against my consent in my land and you should not incite anything against me that will bring about a war with the Dutch.’ The affair was finally settled in a treaty signed in 1655, a year after the death of her ally, the Sultan of Perak.

Achenese justice under Safiatuddin was based in orthodox shari’a law, including the death penalty for adulterers. However, Safiatuddin was often described as merciful in comparison to the brutal and sadistic punishments which far exceeded the penalties of Islamic tradition meted out by her father and husband, the former Sultans. Safiatuddin was also comparatively tolerant in permitting the existence of minority faiths within Aceh, allowing Franciscan priests to minister to the Catholic minority within the Sultanate.

Her 34 year long reign was notable for its peacefulness and stability, due to her graceful diplomatic skills in smoothing over conflict and protecting Acehnese sovereignty during a period of rampant and aggressive European colonialism. In that period, it was usual for a reign to end when the monarch was assassinated or overthrown. The fact that Safiatuddin eventually died of natural causes reflects her success in presiding over a harmonious period in Acehnese history. Moreover, in terms of the arts and learning Safiatuddin’s reign is regarded as the beginning of a golden age of Islamic scholarship. The fact that she was succeeded by three female rulers has often puzzled scholars, but may serve as an indicator of the ‘soft power’ of women’s leadership expressed through diplomacy rather than warfare.