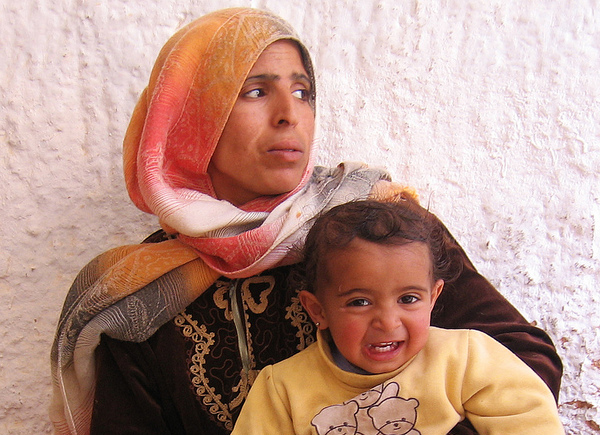 I am fortunate to live between two worlds and two cultures (Arabic-Muslim and European), which allows me to take a third position between them, giving me perspective into both cultures and the ability to define myself and my choices. Arabic-Muslim cultures are complicated. You need to belong to truly feel it. I want to ask one question, ‘Why is the weight of my culture and my religion so hard to bear?’

Being a woman in my country is like walking with shoes made of lead while carrying a backpack ten times your weight. In Tunisia it is a continuous struggle to be able to say, ‘I exist; I think; I do not agree with this or that; I think; I have my own opinion; I´m worth more than this; I’m not shameful’.

I lived with the frustration of seeing how my mother, a very intelligent and talented woman with many aspirations and hopes, was forced to renounce them all once her family decided to marry her to a man about 20 years older than her. Disastrously, she had become pregnant while still a minor. They had to give her an older sister’s identity in order to be able to marry her off legally. She was a soul sacrificed in the name of our culture and its prohibitions; a culture that never looks at women as full human beings, but as permanent children under the supervision of their parents, or any man of the family – due to the simple fact that he is male.

She was forced marry and begin a life that she had never dreamed of; a life that never belonged to her. The differences of age, educational and economic and personal power created a huge moat between them. My father, dealing with his own personal insecurity and low self-esteem, found the easiest way to exercise his male power was to live up to the expectations of dominance he saw in all those eyes outside and around them as a husband.

And so, this was how my mother spent her days, dwindling like a candle over time. She could have been an asset to local politics, but my father would not allow such audacity. He felt he would lose power if she were to escape into the open. He only felt safe through confining her to domestic space, throwing up more and more obstacles to keep her from overcoming them.

The power of the male in my culture is like a heavy black blanket that envelops you and forces you to struggle hard to be able to escape from it. Few succeed.

My mother at some point wanted to divorce, but her father, her brothers and the community said, ‘You can’t do it. There is nowhere for a single woman with four children to go.’ A divorced woman is not respected in our society. She’s no longer a virgin, and is considered out of control, because they can no longer tell if she has had relations with other men or not.

Another sentence, another prison.

And so I was educated, seeing and feeling this struggle and this duality. Men vs. women, dreams and frustrations, struggles and submission… There was a time when I thought, ‘life is this way and that’s it’. Nothing was easy, and I should earn everything by working hard; I had to fight continuously with my father, my mother, my society.

As a woman, all my education turned around sexuality. Everything prohibited or permitted (which was little), has it’s origin in sex. My parents lived constantly worried about whether something would happen and I would lose my virginity. I couldn’t even speak of love, because this could raise my instincts and make me think about having sex with a boy. So, I could not go out without justification, could not be outside home at certain hours of the night, I could not dress in certain ways, should not laugh out loud, not call the attention of men. So, my voice, my entire body, I hid, and remained in the background in order to not draw men´s attention. I have integrated this sensation of walking in the shadows, hoping that no masculine eyes will fall over me.

To resume: I realized that my parents loved me and they did the best they could, but they forgot to ask me, even a single time: What do you want? What do you need in this life? Tell me your worth and walk straight and confident. All their instructions and concerns were projected outward: being careful about what others said. What people would say. There are mandatory standards and we must comply with them.

I lived in a society which does not care for, or is not friendly to women. Rather – it punishes us for being women. I would even dare to say that it’s a hypocritical society because it’s based on prohibitions instead of education. Restricting rather than broadening the scope of action, of love and of abundance. Forcing us to live with a double face: a domestic one and another for public spaces. A split life between desire and obligation.

It’s hard to feel comfortable in this unhealthily patriarchal world. It is a place of unnecessary suffering.

I wish we could manage to spread the integrative thinking about both genders, and allow at least the option that we can be much more than bodies, customs and religion. We are constantly progressing. It is not useful to continue paddling against the natural evolution of the world and to keep turning our back on modernity and critical thinking. Our sources of laws and behaviour should not be only from the holy book, nor from its interpretations made by men – and for men.

A society that paralyzes its 50% is condemned to a slow death. And our Muslim societies are fading at the anguish rate of their women.

Women are different but equal to men. Men must stop hiding behind religion, and women must stop submitting to its strong punishing hand.

As women, we are responsible too: to make a change. The tasks that we put off until one day in the future will fall upon our daughters. In life, we are asked not only to survive, we are called on towards something bigger: to seek out our rights and transcend them, and to leave a better place to new generations. We need to create a new masterpiece of life where our sacred book is human rights. sister-hood magazine is a step towards this wished for world. A healthy and empowered space, to create and work in order to be the owners of our destiny.

I’m grateful to be a woman, to be Tunisian educated in an Arabic-Muslim culture. All this made me aware that i’m more than that, I deserve more and I’m going to work to make it happen. No man is my guardian. Men are my equal – and we should work and live together side by side.

I have more than 15 years of experience working for multinational export companies within international and multicultural environments. My knowledge of several languages, understanding of various cultures, experience within different departments and sectors and my own personal growth are my tools to achieve efficiently my professional goals. Being first a psychologist with the scope on the field of personal development through the coaching. I consider working on gender issues, immigration and equality are my prior interest to work on. Education: Psychologist and coach, certified in NLP, Mindfulness and Mental training. Volunteer in: Association of logo-therapy Viktor Frankl, Foundation: “Proyecto vivir” (attending immigrant women) and the Association “Teléfono de la esperanza” (attending people in emotional crisis). All in Valencia - Spain.