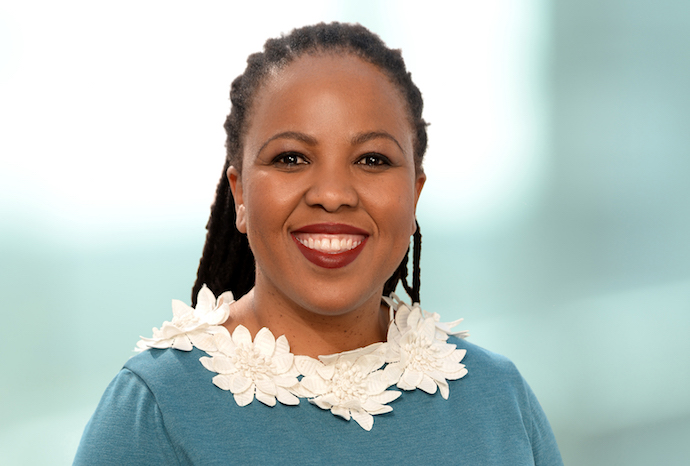 Funeka Montjane, Standard Bank’s Chief Executive of Personal and Business Banking South Africa, is changing the face of corporate leadership at the helm of a division that employs around 20,000 people and services over 11 million customers.

Montjane is unapologetically African, and committed to building the future for women in leadership. To mark South Africa’s National Women’s Day, I sat down with Montjane to talk about the role of senior leadership in supporting women’s success. The conversation delved into the practice of mindfulness and an exploration of masculinity in the corporate world.

‘There is a social script that says success, power and leadership is male and white.’

What type of image does your mind conjure up when you think of success and leadership in corporations? One of the significant barriers to women excelling in the corporate world is that ‘(senior leaders) simply don’t think of us when opportunities arise.’ This is a phenomenon Montjane calls ‘the script’. This exclusion from success is something that Montjane says has been in place for a thousand years. To change this, she stresses, we need to ‘make leading while female, and leading while black, part of the script.’

How do ambitious, smart women contribute to changing the script that works against us? We stay. We stay because, as Montjane reminds us, all ‘the new script’ needs is to be repeated until it becomes a new norm. In staying, we actively challenge this; we smash against the glass ceiling, which itself is made up of nothing more than social perceptions that power is coded masculine and white. When women show up every day, it alters the narrative around power and success in the workplace.

‘Never forget that we are a dream generation. Our mothers never ever imagined that we could have this in one lifetime.’

These are words which will strongly resonate with women everywhere – Shonda Rhimes’ 2014 Sherry Lansing Leadership award acceptance speech reminds us that women have access to the opportunities that we do because of the women who came before us. Based on this, working women and women in positions of influence have a responsibility to forge a path for women after them.

‘All of the women, white or black or brown who woke up like this, who came before me in this town. Think of them. Heads up, eyes on the target. Running. Full speed. Gravity be damned. Running, full speed and crashing. Crashing into that ceiling and falling back. Crashing into it and falling back. Into it and falling back. Woman after woman. Each one running and each one crashing. And everyone falling,’ Rhimes said. ‘…How many women had to hit that glass to ripple it, to send out a thousand hairline fractures? How many women had to hit that glass before the pressure of their effort caused it to evolve from a thick pane of glass into just a thin sheet of splintered ice?’

‘I’m not one of these people with thick skin – and I don’t want to be.’

Even at this senior point in her career, senior male colleagues who have experience working with smart, ambitious women still sometimes call Montjane ‘emotional’ and ‘controlling’.

‘This is the feedback that all women in business get, it is just not possible that all women from all over the world will get the same feedback,’ she says, referring to the stereotypes of women in the workplace. ‘What I’m learning to do is de-personalise it,’ she says.

‘How do ambitious, smart women, contribute to changing the script that works against us? We stay.’

‘I’m learning to be far more conscious or mindful through meditation and retreats.’

In the midst of the rush that characterises modern living, the practice of mindfulness offers an escape. It allows for more self-awareness and introspection. ‘When I’m mindful and I’m aware of what’s happening, I can choose to respond and in these cases it requires depersonalisation,’ says Montjane.

‘Males have such a massive platform to not only mentor but to sponsor people’s careers. They can then be strong sponsors of women.’

While mentorship is often seen as guiding conversations and some level of coaching, sponsorship is about opening doors, creating opportunities and believing in the success of women. Sponsors not only give us opportunities, but they assume our success by not having doubts in our abilities or expecting us to have to prove ourselves. Montjane refers to the active support of her own manager and sponsor Peter Schlebusch’s across her career: he recognises every win she makes, which builds her confidence and enables her to thrive.

‘May I be free of fear, shame and self-doubt.’

What is one of the most harmful behaviours that women exhibit when it comes to their career trajectories? Self-doubt. This crippling belief continues to force women to give up so many amazing opportunities because of the fear of not being good enough to take them on. ‘We give away our treasures,’ says Montjane, who tackles her own self-doubt through meditation and affirmation. Her daily affirmation reaffirms her: ‘May I be well and at ease, may I be peaceful and calm, may I be free of fear, shame and self-doubt.’

‘I think many people have a high need for affirmation. It just opens us up to so much negativity and harm.’

Montjane tells us about the importance of self-care and self-nurture in ensuring that we show up to any space whole. Showing up whole means being able to walk into a space without wanting something. Without giving your power away by allowing the other person to be able to give you something. Practicing mindfulness is an aspect of self-nurture and this brings us closer to being whole, where we are less likely to seek validation from others.

‘I actually think that masculinity is in a crisis.’

Montjane says that she is seeing an increase in men who are ‘beautifully redirecting masculinity, creating a new definition where men are nurturers… it’s coming.’ For women to thrive in the workplace, not only do we need support from male colleagues to change ‘the script’, but also from the men in our lives. Reflecting on her own experiences, Montjane says, ‘the choice of husband is the single most important decision you can make for your career. A fragile male ego is something you need to run away from fast, because it will hurt you so badly.’

‘We go around telling women they can be whatever they want to be and then they come here.’

What do we expect to be the biggest challenge for the next generation of women? Montjane worries that the pace of change of ‘the script’ will not match the adequate and sincere expectations of women – not unless something drastic changes soon. If masculinity continues to be redefined in a nurturing way, then who knows what kind of changes that would influence – and how it can change the world of work as we know it.

These snippets are part of the reason Montjane is the successful, inspiring CEO that she is. Smashing against that glass ceiling so that generations can come to breeze through after her. So, here’s to staying, to taking up more seats at more tables, to self-care, to mindfulness, to redefining masculinity and being part of changing the script!

A peek into Funeka’s world:

Amirah is a South African living in London working as a Management & Strategy consultant at Elixirr. An aspiring social entrepreneur, intersectional feminist and keen traveller, she writes for and about women in business.