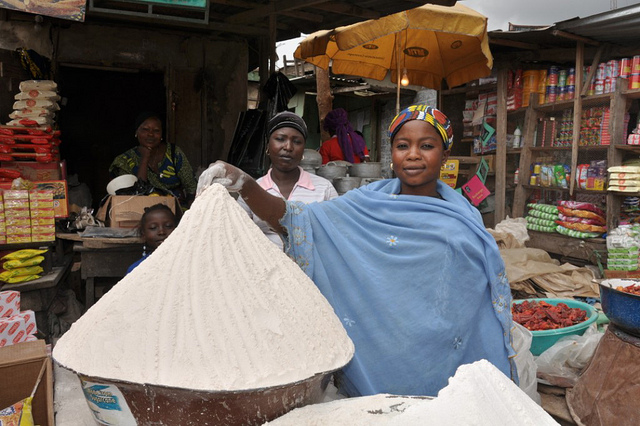 What is the first thing that comes to mind when you think of entrepreneurship in Africa? It’s probably not young, ambitious African women and girls.

According to CNN, although sub-Saharan Africa has the highest rate of female entrepreneurship across the world (27%), many of the start-ups are not sustainable. This is partly because they are one-woman-shows which do not have any employees, so they contribute little to overall economic growth. There is a notable absence of investment in small-to-medium African female entrepreneurship.

She Leads Africa (SLA) was founded in Nigeria by a savvy duo who are driven to see more women around them succeed in business. Having experienced and witnessed challenges faced by women in starting businesses in Nigeria, Yasmin Belo-Osagie and Afua Osei launched SLA in 2014.

As young, African, female entrepreneurs, Yasmin and Afua knew exactly what SLA needed to be to support more women in business. SLA is an online platform and a grassroots network of women who are involved in, or want to start, businesses in Africa. Their goal is to be the number one online destination for ambitious young women. The quirky interactive platform contains a wide variety of content and guidance from Yasmin and Afua’s personal experiences, as well as voices of entrepreneurs from across the continent and opinion pieces on the socio-political situation in Africa and the rest of the world.

SLA is focussed on equipping the modern, millennial African woman with everything she needs to know about starting a business and thriving on her entrepreneurial journey. Having partnered with Intel, Facebook and Huawei among others, the platform is on an upward trajectory – as are African women.

The founders have stated time and again that it is very difficult for women to become something that they have not seen, and that it is imperative to highlight women who are already leading businesses so that other young women have role models to aspire to.

It is imperative to highlight women who are already leading businesses, so that other young women have role models to aspire to.

Beyond the online platform, SLA runs a series of four-day workshops called SheHive. This is an experience targeted at aspiring female entrepreneurs to help them to build networks and develop their business acumen in order to launch their enterprises. The event also includes a pitch session where women are given the opportunity to present their businesses or ideas to a panel of investors and to garner financial and mentoring support (much like The Pitch). SLA describes this as ‘building a community of young women to support each other in their entrepreneurial endeavours.’ If that’s not enough, SLA is supported by high-profile entrepreneurs who mentor many of the women in the ‘hive,’ share their wisdom through the website, and support the entrepreneurs through their networks. SheHive was launched in 2016 and by the end of 2017 it will have been hosted in Lagos, Accra, Johannesburg, London and New York.

Yasmin Belo-Osagi, co-founder of SLA says, ‘I realised that whenever people were talking about business on the continent, it was always focused on the micro-level—whether that was micro-led businesses or micro-funding. No one was really thinking about identifying African women who want to create businesses at the national, regional and global levels, and helping them grow to become multi-million dollar businesses. We found that there were not many people focusing on this demographic of African women, yet, looking at our backgrounds, and looking at our friends, we knew that there are African women who want to be more; who want to be leaders of companies.’

Not only is SLA supporting Africa’s up and coming entrepreneurs and local talent, but they are also actively addressing gender inclusivity in African business. SLA has a strong focus on educating women in how to navigate the working world and connecting them with female role models in business. The duo also believe in the importance of bringing men into the conversation around gender inclusivity, to reinstall the accountability that many successful male entrepreneurs have because of their roles. These leaders often play mentoring roles to many of SLA’s followers, helping them to navigate the world of business: male dominated industries in particular.

Having reached over 350,000 women across 47 countries since 2014, their goal is to expand the community globally, finding better ways to connect and empower women in entrepreneurship beyond Africa. As the former secretary general of the U.N. stated, ‘there is no tool for development more effective than the empowerment of women.’

Amirah is a South African living in London working as a Management & Strategy consultant at Elixirr. An aspiring social entrepreneur, intersectional feminist and keen traveller, she writes for and about women in business.