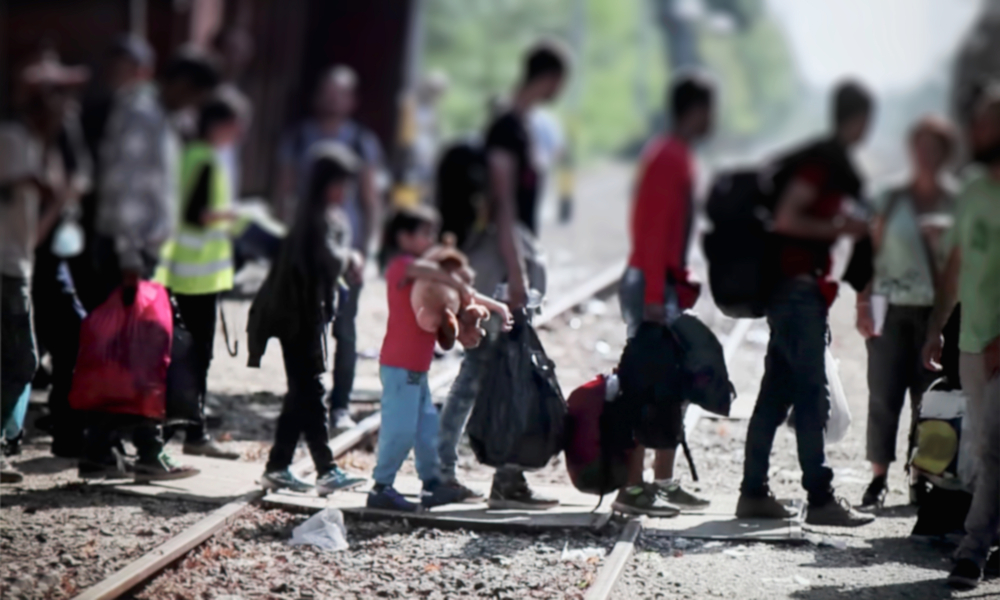 We’ve finished reading together. ‘Can you please brush your teeth and get into your pyjamas? When you’re done I will come and tuck you in,’ I tell her. So begins the night time routine at my family home, in a leafy suburb on the outskirts of London town, which is the best city in the world (in my humble opinion). My daughter calls me, so I go and tuck her in. I give her her favourite soft toy, ‘Snowy’, and ask if she is warm enough. I kiss her and tell her I love her. She asks for a final cuddle. Afterwards, I switch off the light as I leave her warm, well-kept room.

Female offspring asleep, check; male offspring reading, check; time for me, check. I reach for my phone and take a look at Channel 4 news. My phone is being temperamental. The sound has switched itself off somehow, so all I see is an image. It can only be a landfill site. A rubbish dump. A vast area covered in what looks like rubbish, piled high in various disfigured shapes, across the entire image. I look again. The rubbish is coloured, in blue and white and grey, mainly grey. There are splashes of colour scattered across the image but the skyline is grey. There are small circles visible amongst the rubbish. I can see small pale circles amongst the layers of blue, of grey, of white.

These circles were faces. Children’s faces. The landfill site is a refugee camp. The layers of colours are the colours of tents and thin mattresses which the children have piled up high to sleep between. These children belonged to someone. They had parents, yet this was their home now. They slept between these layers of debris to escape whatever fate they had fled from.

How was this the answer? I started wondering about their parents. My mind started to boggle at the prospect of my children being without me or their father. I couldn’t bear to think about it. Is this why we prevent ourselves from empathising with them? We decide it is too much, so we don’t let ourselves? It’s easier not to consider the horrid, ugly reality, so we didn’t. We don’t.

I felt a complete and utter hypocrite. Both of my children were sleeping in comfortable, warm, safe beds, while these children in refugee camps were left to fend for themselves. How is this allowed to happen in the twenty-first century, in a so-called civilised society? How would you feel if it was your children living outside in a rubbish dump?

In the picture, all I could see were six or seven faces peering out from between the layers of rubbish, and what was possibly bedding piled around. The layers of tents and pathetically thin mattresses were coloured grim-blue and worn-grey. The circles had no colour. The only way the children’s faces could be distinguished from the rubbish was their deathly pale complexion. Victimised by Assad, or Putin, or other regimes, and now by homelessness, poverty – and potentially starvation and death. They must have been about six or seven years old. Such harsh reality at such a tender age screams injustice to me.

I have a seven-year-old daughter. I want her to be a child as long as nature permits. The thought of her rummaging amongst rubble and debris to find food as a means of survival is abhorrent to me. And should be to all.

So I ask: how is this allowed to happen in the 21st century?

How are these atrocities allowed to happen?

How have we normalised this?

Have we become so desensitised that this is the new normal?

What could I as an individual do? Send money to a charity that helps these children? Volunteer myself? Drop everything and go and help those less fortunate than myself? How many of them could I help? What would I do? Who would have my kids while I was out there, playing charity worker?

I didn’t know what I could do. I got in touch with some volunteering organisations that were helping in Calais and in Greece where these evacuees-of-war were arriving. They were men, women, children, teachers, doctors, lawyers, engineers. Through no fault of their own, their lives had been turned upside down. Survival was their only aim. They arrived with nothing. Many arrived having lost loved ones en route. I still don’t understand how this was allowed to happen? Where was the outcry?

Why isn’t all human life precious?