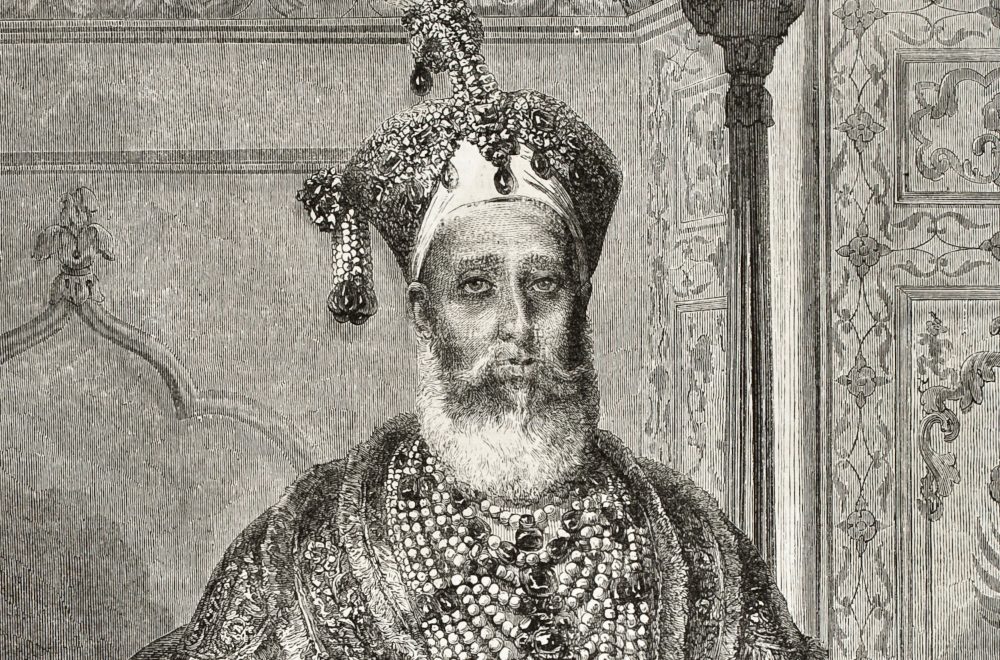 Having documented hundreds of narratives on divisions, separations, migrations, growth and lifestyles in Pakistan with the global oral history project The 1947 Partition Archive, over the course of several years, I’m now embarking on a series of essays on colonial and post-colonial personal histories of the Indo-Pak planet.

The first of the series is based in exploring my family history intertwined with learnings from British imperialism. It is not a choice for personal reasons but a fact that the month of Muharram is upon us. If I had a time machine and could actually travel to the Red Fort, to the year 1857 in September, I would pronounce Bahadur Shah Zafar guilty as charged. That’s what any post-colonial great, great, great granddaughter of any ‘last Mughal king’ should do. Unfortunately, I carry the burden of being one of those great great granddaughters.

The burden is not Kipling’s white-man’s burden, described in Kim (brilliantly unmasked of its imperialist nature by Edward Said), but the 300-year old Mughal legacy of glorious architecture, music, food, calligraphy, Eastern languages and paintings of the sub-continent.

For many historians in Pakistan, the last Mughal king is a laughing stock: a lazy old self-indulgent man who had no control over the burgeoning colonial politics of the British-government sponsored East India Company (established in 1608 in Gujarat, India, also known as the EIC).

While the EIC expanded its civil and military base in India, Bahadur Shah Zafar (who had been crowned emperor of India in 1837) wrote ghazals, amatory poems or odes. His mother Lal Bai was a Rajput Hindu princess, while his father Akbar Shah II was a Muslim, of course. I want to ask Shah Zafar, what good did poetry do towards saving an empire that was technically dead after the demise of Aurangzeb in 1707, the most hated Mughal king in Indian history?

Many historians in India, honour Bahadur Shah Zafar and his family, and their tragic fate. This includes their notorious exile and death in Burma – دو گز زمین بھی نہ ملی کوے یار میں  . (How unfortunate is Zafar, not even two yards of land were to be had, in the land of his beloved)

Up until the death of Indian Prime Minister, Jawaharlal Nehru, the 1857 ‘war of independence’ was commemorated every year at the Delhi presidential house. In his book Punjab: A History From Aurangzeb to Mountbatten, Indian historian Raj Mohan Gandhi writes that Shah Zafar was living on an East India Company pension well before the mutiny of 1857 happened. The punchline: On May 11th, 1857, 56 British women and children plus some Indian Christians taking refuge in the Red Fort of Delhi were murdered by mutineers. Bahadur Shah Zafar was 82 years old. Having not eaten for several days, and not familiar with jargon of English law, he pleaded ‘not guilty’ at his trial. “Much of what has been done was without my consent,” he said. I wonder why he hadn’t at least been fed on the day of the trial.

Shah Zafar’s skull-cap shaped gold crown fetched a decent £500 (value today, Rs. 108, 200/-) for Major Robert Tyler, and was sold to Queen Victoria herself. The beauty of it is that Major Tyler, being a British subject, chose to sell Shah Zafar’s crown to the Queen of England instead of a street jeweller who was offering him a £1000 for it. Where else could one find such a fine example of loyalty to the Empire?

By the end of the 1857 revolt, the army and military police of British Punjab assembled by Sir John Lawrence were the epitome of the British divide-and-rule policy. It included much of today’s Khyber Pakhtunkhwa, and was comprised of 58,000 men, of whom 11,000 were European, 24,000 Muslim, 13,000 Sikh, 2,000 Dogra, and 8,000 other Hindus – a British answer to Bahadur Shah Zafar’s final prayers for Hindu-Muslim unity perhaps? On 12th September 1857, William Hodson, the man who arrested my great great grandfather, reserved the honour of shooting three of his sons Mirza Mughal, Mirza Khizr Sultan, and Mirza Abu Bakr, for himself. Not to mention, Shah Zafar’s pen, papers and ink were also confiscated in Burma. End Result: Mumbai-based historian Amaresh Misra, in War of Civilisations, argues that British vengeance lasted for another ten years at least, resulting in an untold holocaust of 10 million people in India.

My father hails from Khanpur, a city in Khyber Pakhtunkhwa which became Pakistani territory after Sir Cyril Radcliffe’s 1947 Partition. His father, after losing his lands in a dispute with the Rajas of Khanpur, left for Doha in pursuit of a better life. In 1969, my father, coerced into exploring job opportunities instead of completing his education by his father and step-mother, also relocated to Doha. My father is a direct descendant of Syed Abdul Qadir Gilani, an Islamic scholar with genetic links to Prophet Muhammad’s (PBUH) nephew and son-in-law Ali, and both his grandsons, Hassan and Hussain. Baba Guru Nanak, founder of Sikhism, paid his respects at Gilani’s last resting place in Baghdad, Iraq in 1520 or 1521 A.D (according to Nanak historian Roopinder Singh), towards the end of his spiritual journey around the world. My mother, a child of two refugees from Delhi, was born and raised in Karachi, the former Pakistani capital, and the largest city in Sindh. In 1971, she settled with Nani and Nana in Doha, leaving a war-torn Karachi with a mushrooming migrant population from India, and the newly founded Bangladesh. Both my parents were married in Doha.

Doha was home to the British colonizers, an important functional location for the EIC, with strong ties with the ruling Thani family. By the time I was born, raised and schooled in Doha, the Thani family was still in power. It still is.

During summer every year, it was customary to meet Nani in Karachi. Every time I did, she would pour her heart out, lamenting her father’s nostalgia of having been separated from his sister in India, her own ordeal of migrating from Delhi to Karachi via Lahore, and anger over one traitor within her own family that brought the wrath of the British in 1857. While showing her tattered family-tree papyrus with a Government of India seal still visible, Nani would repeatedly point to the beginning of the tree saying, ‘We are descendants of Shah Zafar’s first wife, Begum Ashraf Mahal. You are princesses. Be proud of your ancestors.’

Nani’s phuppo (paternal aunt) and her family stayed behind in India after the 1947 Partition, as is the case in many family histories I have documented. One of them I really wanted to know more about was Jinnah’s close friend and ally, Barrister Danial Latifi, who married my great-grandaunt Pakeezah Begum, who was a librarian with the Indian Cultural Ministry at the time. Latifi was famous for introducing radical reforms in divorce laws for Muslim women in India. Ironically, it wasn’t me but British historian William Dalrymple who caught up to my grand-aunt Pakeezah Begum, just in time to publish his version of the decline of the Mughal Empire. “It was all great-grandfather Aurangzeb’s fault,” she tells Dalrymple. “If it wasn’t for him we’d still have the empire.” Dalrymple goes as far as asking her if she would have made a good Empress. ‘I asked while nibbling a biscuit’, he writes, to which she responds, “If I was Empress, I would be a constitutional Empress only. I would be like your Queen: not having much power but maintaining my dignity and status. Probably I would have an elected Prime Minister beneath me. Democracy is a good thing for modern times.” On the subject of discussing Partition, Dalrymple merely mentions the word. According to historical records of Indian government, the traitor both my Nani and her phuppo refer to is Mirza Ilahi Bux, the uncle of the wife of Mirza Fakhru, heir to the throne after Bahadur Shah Zafar. “Ilahi Bux was a traitor who got everyone in the family killed!” Both my grandmother and grandaunt affirm vehemently, a word missing in Dalrymple’s vocabulary.

I have never been to India. As a Pakistani passport holder with generational ties to a country now separated by a border, my chance of getting a multiple-entry visa to India is non-existent, compared with Americans or Europeans or citizens of the Far East. I have little authority or confidence to agree or disagree with Dalrymple’s views in his book The City of Djinns: A Year in Delhi.

None of my grandparents’ migration stories have been captured in any book. David Gilmartin, in his treatise Civilisation and Modernity: Narrating the Creation of Pakistan, identifies that the ‘roots of the problem lie in the stark disjunction in historical literature; between the story of the ‘high politics’ of Partition, the negotiations between the British, the Congress and the Muslim League, and the narrative of popular history, of ‘history from below’. For historians, the ‘high politics’ has, in fact, long been a staple, including what we read in Cambridge textbooks. The drama of 1857 mutiny and the 1947 Partition has traditionally been focused on the ‘tragedy of few men deciding on the fates of voiceless millions’.

The most contextually correct synonym for traitor in our post colonial history is spy and informant. They came in all colours, religions and classes, not just during the British rule of India but before.

It is no secret that the British had no shortage of spies and informants from all walks of life, colour and religion, not exclusive to the Mughal family and subjects only. The British were, after all, leading the industrial revolution in India, laying down roads, railways, modern military and civil services, modern communication technologies using Indian money. These were luxuries made irresistible by an influx of English literature expressing the pleasure principles enjoyed by the Gora Sahabs in India. Spies and informants, specifically serving in the World Wars, are portrayed as heroes in most Hollywood films – take the celebrated spies of Western fiction: James Bond, Simon Templar, and Lorraine Broughton, and real-life heroes like Oskar Schindler, and Colonel Claus von Stauffenberg. No Hollywood film has ever been made of World War II spies of Indian origin.

Take Noor Inayat Khan, a spy for the British, who was of Indian origin. Born in Moscow, to an Indian father and American mother she was a direct descendant of my Nana’s ancestor, Tipu Sultan. Khan is the only Indian woman to have worked as Special Operations Executive in World War II. She was found by the Nazi secret police in 1944, and executed at the Dachau concentration camp in Germany. Noor Inayat Khan remains missing from Pakistan Studies textbooks as well.

With growing awareness of disjunctions in historical literature, Pakistani students of history are oddly comforting. On one occasion, when I mimicked Pakistani historians laughing at the fate of the last Mughal King, the whole classroom fell silent. The students were not smiling or laughing at all. In their responses to questions on Bahadur Shah Zafur they were incredibly empathic and objective – an important indication of the need to shed the burden of nostalgia of lost origins, for careful exposure to the evils of cultural imperialism.

Fakhra Hassan teaches English, Geography and History at the Roots Millennium School in Gujranwala Cantt, and volunteers for The 1947 Partition Archive in her spare time.