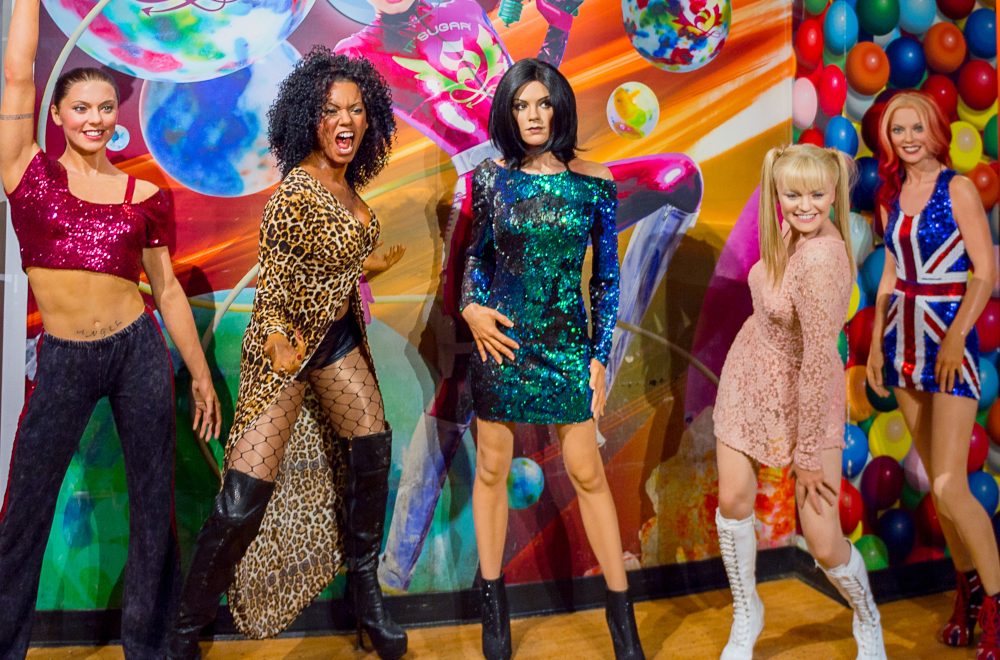 Why is she scary?

‘Mummy, why is Scary Spice scary?’

The context: The Royal Wedding approaches. These are very exciting times for me, because I have heard that the Spice Girls may well be reunited for the ceremony in May. The Spice Girls were the soundtrack of my youth. They were a revolutionary girl band promoting Girl Power and making their voices heard. My niece wanted to play some of the music by the Spice Girls. She chose their first big hit that goes Zigg-a-Zigg ahh: the debut single that stormed the charts and went straight to number one.

Later that week, my daughter and I were in the car. I asked her if she had heard of the Spice Girls. She had not. She used my phone to search for them on Youtube. I told her that they were five women sharing the message that women can do anything: women can be strong and powerful and they can take charge of their own lives.

I explained that each woman had a different nickname. ‘Back in 1996, when the Spice Girls were starting out, Top of the Pops magazine gave them each nicknames. The rest is history.’ I then listed them as she was watching a video of one of their songs (my own favourite is ‘Mamma’ obviously!) I said ‘There is Ginger Spice’ and she said, ‘Oh, so that’s the one with the ginger hair?’

‘Yes, and there is Posh Spice and Baby Spice and Sporty Spice.’

‘Oh yeah, I can see why she’s Sporty Spice, she’s the one doing all the gymnastics.’

‘Sounds about right. And there is Scary Spice.’

‘Which one is supposed to be Scary Spice?’

I was still driving, so the only way to describe ‘Scary’ was really difficult for me. I finally said that the Black lady was Scary Spice.

‘So why is she scary? What is scary about Scary Spice?’

There were so many things that came to the forefront of my mind.

In the video my daughter was watching, Mel B, aka. Scary Spice was wearing her hair in its natural, curly, afro state. A few Black female friends of mine have said that they have been treated differently when they have worn their hair in its natural state. One particular friend said that she would never go to an interview without straightening and relaxing her hair. There is an expectation to adjust, acclimatize, integrate, assimilate – I don’t know what you want to call it, but it’s definitely there. As a practising Muslim who wears a hijab and a headscarf, I also acclimatise, adjust and adapt. I don’t often wear traditional clothes from my Indian heritage. It is freezing here; but maybe there is also an underlying need to be accepted.

I had no real answer to her question – she asked me again: ‘What is scary about Scary Spice?’

I wanted to shout it out: ‘Fuck all is scary about Scary Spice. Absolutely nothing!’ But any good mother knows to bite her tongue when appropriate. I eventually responded with a washy ‘I don’t really know.’ I was angry, partly at myself for my weak response, but also for my past inability to ask myself the same question when the Spice Girls debuted 20 years ago.

The conversation ended when we reached our destination. But it lingered in my mind. We are constantly fed stereotypes from the mainstream media and discourse. I don’t even think I can be content with the term ‘stereotype’. I actually think we are fed intentional misconceptions which affect our sense of reality.

How do I say to my ten-year-old daughter, ‘Well the reason that Scary Spice is scary is because when Black people and Black women spoke out against the mistreatment of Black people for centuries, White people said that Black women were problematic, antagonistic, rebellious and aggressive? So when people see Black women speaking out now, society seems to generally think that is a problem. The reason that Scary Spice is called Scary Spice is because of hundreds and hundreds of years of British Colonialism and oppression. Oh, and the Trans-Atlantic Slave Trade. Oh, and also institutional racism which still exists in many, many forms today.’

Is this what I’m going to say to my 10-year-old daughter? Am I keeping it that real?

Why is Scary Spice scary?

Days later, I happened to see Mel B (Scary Spice) on a panel chat show in the US. Mel B had received an invitation to the Royal Wedding. All the other Spice Girls had also been invited individually. She had dyed her hair blonde. It was straightened and relaxed and definitely treated, swept back away from her face in a very conservative chignon. She was wearing a smart tailored suit jacket. All I could see was a woman who was trying incredibly hard to be accepted. Gone was the Afro, gone were the bright colours; her manner was calm, sophisticated, and collected. Of course this was twenty years after the emergence of the Spice Girls. People mature and gain experience and evolve. But you don’t evolve into having blonde hair or choosing to relax or straighten your hair. Those are deliberate choices.

Are People of Colour – and especially Women of Colour – only acceptable in forms which mimic White culture?  Isn’t this just the continuous aftermath of British Colonialism? Our history equates success with being white. And if success is coded white, then so is beauty. There is a multibillion-dollar industry which sells ‘fairness’ to millions because it equates to beauty and power. We cannot understand our present unless we understand our past, because our past is still very much influencing our present.

We need to know it, accept it and own it: because this will equip us with the answers to questions like ‘Why is she scary?’