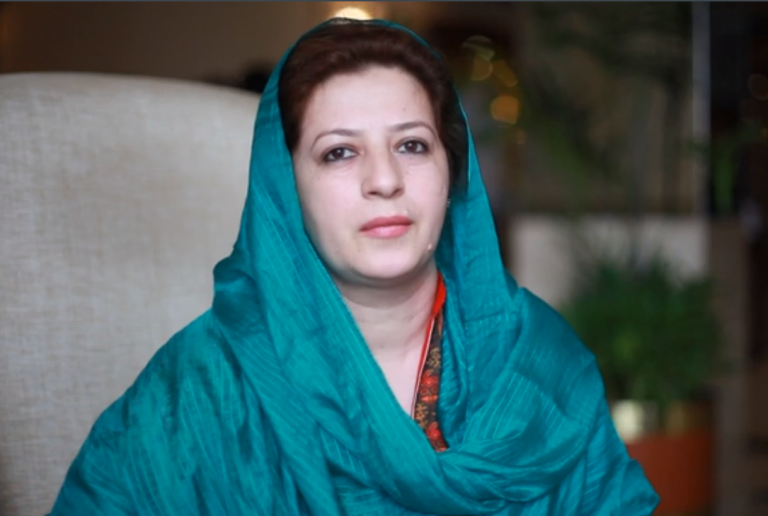 Extremists fear the power of education, as shown by their attacks Malala Yousafzai and other schoolgirls. Bushra Qadeem Hyder also understands the power of education. She is a driving force behind efforts to eradicate extremist ideologies in Pakistan and a pioneer in education—not only bringing through the principles of peace education to her own school, but also through integrating a comprehensive peace curriculum across the entire school system. Through her peace education, pupils are exposed to the religious and cultural teachings of other communities. This promotes understanding and acceptance.

She told us about how she is educating the next generation of a country saturated in conflict.

Extremism, to me, is imposing your views and values on others. In Pakistan over the last decade we have seen extremism in different forms. It’s not just shown through terrorist attacks, but also the growing tendency for people to hold extreme ideas and ideologies. These have trickled into every level of society, from the poor and less-educated to the highly-educated elite. So for us it is a dual battle: we are not only fighting off extremists who are training young people to become human bombs, but also struggling against divisions within the educated community.

What challenges do you face as a head teacher?

We deal with children from diverse backgrounds. They have discussions at home; they listen to their parents. When they come to us, they are in a state of confusion: who exactly are the extremists? How do we know who they are? It was a challenge. We were confronting extremists who were killing people on the streets, in the markets and in the mosques; at the same time the educated classes were sending their children to us.

To complicate matters further, there are three parallel systems of education in Pakistan: government schools, private schools and madrasas (religious schools). All three follow different syllabi and have totally contrasting teaching methodologies. They don’t mingle, and each looks down upon the other. They are suspicious of any changes brought into the curriculum. Confronting and challenging the views of the political parties is also a problem. Change is risky and no one is ready to take a chance.

This drove me to initiate a peace education program within my own school. My school is the first in Pakistan which has peace education as part of the mainstream curriculum. I have been spreading the word to other private institutions. I now have five schools working with me. They have incorporated peace education as well.

With the help of several organisations, I started involving private schools with the mainstream schools. We retrain their teachers, from both madrasas and private schools, and then we bring together the students of our private schools with those of the madrasas. Together they work on art competitions, peace theatre, debates, competitions and sports. These activities bridge the gaps between the students. The gap is typically widest between students from madrasas and private institutions. They consider each other as belonging to two different universes. The communication gap is enormous. They don’t trust each other. But when they get together they talk and find out that they are all the same.

What are the effects on students?

If you were new to my school, no matter which country you come from, or which religion you follow, a group of students would welcome you on the very first day. They would take you to class and introduce you. All the students would welcome you. They would give a speech to welcome you to our community. Amongst the students are ‘peace agents’ who are trained in conflict resolution and conflict transformation. Within their classes, when there is a problem they solve it on their own without going to the teachers. New students are enrolled in a human rights class, which teaches acceptance, regardless of which religion or sect they belong to.

You would never feel like a stranger. It is not just your class but the entire school which is told that there is someone new to welcome. This plants the seeds of acceptance and tolerance. If a newcomer is welcomed, they will become part of the community. They will not develop biases or hatred, and they won’t start fighting.

Have you dealt with extremism?

We have seen extreme cases throughout the five years we have been running the programmes. In my school we have Christian students and Shia students; we have students from different regions of Pakistan as well. Some of them have really extreme views. They will say things like ‘he behaves like this because he is a Punjabi,’ or say that Shias are not Muslims. Initially it was difficult for us to manage, but now they all understand that we are all God’s creations. God creates people in whichever way he wants. So for us, the challenge we face as human beings is how to respect that diversity. Students who used to oppose each other are now really good friends.

Why is it hard to put peace on the curriculum?

The majority of people assume that education has nothing to do with extremism. They do not see a need for peace curricula, or understand how its presence in schools will make a difference to the overall security situation of the country. Everything in Pakistan is politicised, especially education. Discussion of interfaith harmony, equal rights and pluralism is seen as anti-Islam by religious political parties so educationists won’t risk talking about peace curricula. Assertive advocacy for the inclusion of peace education has never been undertaken. A lack of funding and a lack of interest from donors has been another hurdle.

Could you tell us a certain story or memory that touched you from your experience at work, be it with a child or teacher?

We started our peace education program in 2009 at a time when Peshawar was experiencing daily bomb blasts. In my first peace education class I discussed tolerance and forgiveness. One of the students did not agree that people should be forgiven. He was adamant that revenge brings justice. I was trying to convince him otherwise with the help of Quranic verses and the sayings of the Prophet, but he stuck to his point. I knew the reason.

His elder brother had been a doctor in the army who had died recently during a Taliban attack. I took him to my office and we had a conversation. He told me that his mother refused to leave her room; that she had stopped talking and seeing people. She did not talk even to him or his siblings. She was taking medicine for depression that made her sleepy. The whole family was disturbed.

I got in touch with the child’s father and elder sister. We discussed the situation in detail. I asked them if there was a possibility of meeting the mother. They reluctantly promised to bring her to school. After three weeks, she showed up with her daughter. During her first meeting she remained silent and only asked about her son’s behaviour. This was an opportunity. I told her he was not studying well and had become very aggressive. He fought with the other boys and argued with everyone. This information disturbed her. I asked her to come to school on a regular basis to support her son. She agreed.

Two days later, I received a phone call from the mother. She asked about her son. I told her that he was behaving in the same way. This was an opportunity, so I told her about our peace education classes and invited her to come and take a class with the students. To my surprise, she accepted the offer. When she came to school I briefed her about our programme and the topic that I wanted her to discuss, based on her personal experience.

The usual forty-minute class took an hour. I was anxiously waiting for her feedback. She came to my office with a very mixed expression on her face. After a while, a smile appeared on her face. She thanked me for giving her the opportunity to share her feelings and experiences, and to overcome her biases. That one class made her realize how important it was for the older generation to teach children about acceptance of diversity, and the values of forgiveness and tolerance. She became a regular visitor to school and conducted most of our peace education classes.

How would the world change if peace work was funded like militaries are?

I think the world would be a far better and more peaceful place if we invested less in the military and more in peace education. If we invest more, if we train more teachers, if we train more students, then within ten years I am sure that most of the conflicts that we face on daily basis would be overcome.

What assets do women bring to conflict resolution?

I believe women are more affected by conflict than men. We have seen that throughout the world. I think mothers and women have influence, not only in their own households, but in the community as well. If women know more about what peace is, and how it can be brought about, I think it will be beneficial for the children they raise and the communities they live in. If women raise children to value peace and teach them tolerance, then these children will grow up into compassionate adults.

What gives you hope for a better, less violent Pakistan?

We are a resilient nation and have overcome most of our troubles in an effective and positive manner. The increase in education, the younger generation, and an active civil society are our hope for a less violent Pakistan.

A version of this post was published on ICAN and has been reproduced with permission.