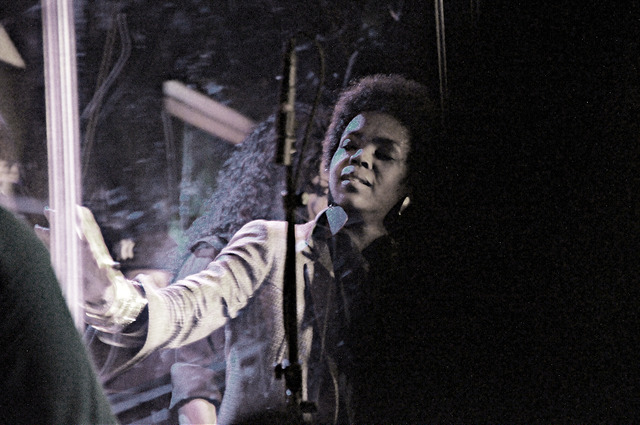 Music as catharsis: From St. Louis to New York and back

A few weeks ago, I went up to New York for a concert, a ‘show,’ really, in the middle of the week. I bought tickets to the event the day they went on sale, sitting in my office at 10am, hitting refresh on my browser, feeling a bit childish about my level of excitement. I hadn’t asked any friends if I could stay with them or anyone if they wanted the second ticket. I didn’t even ask work about taking the time off until after the fact, and hadn’t bought a train ticket from DC. I just knew I wanted to see the Swet Shop Boys in concert. I had not been this excited about a new band since college. Pre-college, growing up in St. Louis, the music I was exposed to was very different from the music I listen to now. My parents sent me and my brother to a predominantly white prep school so that we could get the best possible education. There, most people were listening to Dave Matthews Band, Phish, and maybe some Janet Jackson—Rhythm Nation is one of the first tapes I remember owning. I enjoyed the music and even became a DMB aficionado, but let’s face it, when I went to a concert, the audience was all white.

There was the Muslim and Pakistani community in St. Louis, which was completely separate from my school community. On the weekends, I went to parties wearing shalwar kameez, where groups of friends were waiting to hear about my week. We listened to both Bollywood music and some popular hip hop (think Rump Shaker), making up dances at our sleepovers. I came to love dancing to Bollywood music, making up choreography for someone’s wedding, or for no reason at all. My parents generally felt more comfortable letting me stay over at other Muslim people’s houses because they knew their families. That meant I had Pakistani friends and ‘American’ friends and the two rarely interacted—and neither did the music to which we listened. It wasn’t until college that I began to explore different types of music, some of which spoke to my personal experiences. The albums I listened to the most in my freshman year were The Miseducation of Lauryn Hill and the Beastie Boys Hello Nasty. I was blown away when I realized that Lauryn Hill was referring to the Surat-ul-Mustaquin at the beginning of her hit song ‘Doo Wop—That Thing.’

My friend took me to a Roots concert when they came to play on campus, and although I was definitely wearing the wrong shoes, the talent and depth of the group opened my eyes to an entirely new genre of music. Of course, part of this was the college experience, and part of this was going to NYU in the middle of Greenwich Village—a place where all types of music and all types of people flourished. This is why I stayed in New York for nine years, not just the four years of undergrad I originally intended.

Dual identities went unquestioned. It was there that I began to talk to non-Muslim friends about my Muslim and Pakistani upbringing. I gained a diverse group of friends rather than two separate groups, and I was exposed to all kinds of music. I often go back to these albums from my formative years when listening to NPR becomes a little too much for the ride to work. It follows that I had been listening to Miseducation on repeat last November. Having come back to DC after taking a three month leave of absence to volunteer on Democratic Party campaigns in my hometown of St. Louis as well as Omaha, I was completely demoralized and quite frankly scared for my community back home, where my cousin’s house had already been vandalized pre-election.

And then I discovered the Swet Shop Boys, whose music seemed to come to me like a gift that I had to slowly unravel. My first reaction was discomfort. They didn’t pull any punches, and unapologetically presented the struggles they faced in a post-Brexit/about to be Trump world. I wasn’t used to socially conscious music mirroring my own experience, or even the collective Pakistani Muslim experience. Their representation was so authentic that it felt like the MCs were at times talking about my life, and more importantly, the uncomfortable parts that we don’t talk about in public. They were also able to poke fun at some of the struggles they faced, with tongue and cheek lines that made me laugh out loud. My discomfort slowly subsided, and the album became an inspiring and cathartic experience. Cashmere is now the album I listen to on repeat in my car. There I was, at Webster Hall, excited like an eighteen year-old, rapping along with every lyric. The band closed the show with one of their most popular songs, Aaja—the hook sounds like a Bollywood song out of the ‘60s, something my parents would have listened to, but it’s actually Pakistani singer Ali Sethi being perfectly produced to sound like a sample. The crowd of 1500 people went crazy, singing the entire chorus in Urdu and going straight into the English language rap. As I sang along, I looked around in awe.

As a Pakistani kid growing up in St. Louis, I could never have imagined an artist so boldly and proudly representing their dual identity—our dual identity really—and doing it so well that the audience embraced them not just because of their connection to the music, but because it was just that good.  The authenticity and confidence they bring to the art form also says, we belong right here, and our music represents part of the fabric of this society. I didn’t know I needed this sort of representation in popular culture. I would not have thought to ask for it, but when a crowd of people seamlessly rapped along with references to ‘Jigga when he first heard Lemonade,’ and Madhuri Dixit’s hips, the sense of belonging was palpable. Being back in the Midwest during election season reminded me of the discomfort of living between two worlds that we sometimes become immune to in larger coastal cities—I still have friends in St. Louis who won’t leave their cars to pick up groceries while wearing Pakistani clothes. The incredible thing about music is that it can travel and take you with it—the way Bollywood music kept my friends and I grounded in our culture as kids.

For me, Cashmere and the trove of other music I discovered by Riz MC as a result—Englistan and ‘Sour Times’— helped me work through the feelings of helplessness and fear after the election, reminding me that I belong here and need to keep fighting the good fight. As I walked out of the concert hall and crossed the street to get a cab, I found myself staring straight at my freshman year dorm—where I not only discovered new music, but was reminded where I also first became proud of my dual identity.

Ayesha S. Ali is an International Development Professional based in Washington, DC via New York City and St. Louis, MO. She has lived and worked in India and West Bank. A proud American, Muslim, and Pakistani, she considers herself a progressive and an activist.