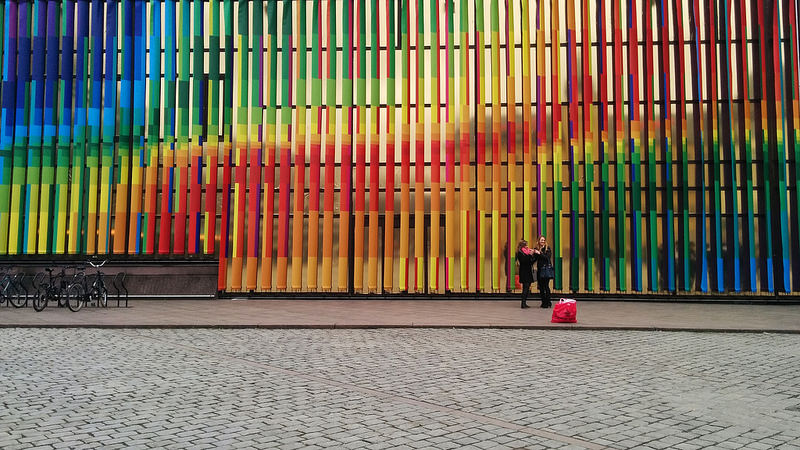 Pain is real. So is hope.

I grew up in a conservative Muslim Somali family. But they hadn’t always been like that. Previously, Somali people were freer, and women had more rights, although now, looking back, it is hard to imagine. When I was young, my family were more permissive and less judgemental. Everything changed suddenly. Women were told to cover their bodies from head to toe, and everybody had to go to the madrasa. Even our names were changed from Aar to Ahmed, and from Absame to Mohamed. Suddenly we took on another culture, learned another language, and another set of rules. Some people began to claim they had Arabic heritage. Somalis used to be a joyful people, who enjoyed dancing, music, parties, theatres and cinemas: but now all these activities have been designated haram and shameful.

I grew up in a town. My mother married at a very young age. I had six siblings. My dad was very much older, already divorced with children. He was not particularly religious and neither was she, at first, but suddenly everything changed. After my younger brother was born she started to wear the hijab and threw away all our music. She said, and I quote,  ‘I return to God’. Although I asked myself constantly where she had been before this ‘return’, I kind of understood her.

When I was five years old, I was sent to the madrasa. One of the new rules was that children must go to the madrasa before they started school, so that we had finished the Koran before we started school. I did not complain; I was five so everything was cool by me. I memorised the Koran – the whole Koran – although I did not know what it meant. I also learned how to read and write in Arabic. It is a bit strange to know how to write and read, and to memorise a whole book, when you don’t know what it means, but it certainly makes our parents very proud. Once you finish memorising the Koran, a big party is held. The family purchase gifts for the teachers, sacrifice a sheep in thanks to God, and make a lot of coffee and popcorn. Everybody praises you, and for a day you are very popular. Neighbours and most of your relatives will come by to congratulate you.

According to Somali tradition, if someone has more money or a better situation than their relatives, then they must help them. My dad and his family were generous to other relatives. My mother’s family were the same. Many cousins lived with us. It is normal in our culture for there to be 20 or more people living together in one household. I grew up with my cousins as well as my siblings. I was the first girl in the family: I sometimes I wished I wasn’t. My dad and my mother trusted my cousins as if they were their own children, but they did not behave like brothers. From a very young age I was subjected to harassment and rape in my own house.

Every time I went to the bathroom, a cousin looked at me through a hole in the door. When I was alone in the house, he told me I was wasting water and offered to wash me. I could not say no. When I was seven or eight years old, that cousin went away to work and I felt relieved. One day, I was sleeping and suddenly someone came up behind me and tried to pull my legs apart. I freaked out: one of my cousins was trying to touch me. I told him to go away but he did not. He did not go anywhere until I was 15 years old. As I got older it got worse and worse, until my mother divorced my dad.

The ironic thing was that I had been circumcised because they wanted to keep me away from men. I was forced wear the hijab from the age of twelve, even in the house, because my cousins were living with us. I wasn’t allowed to go out alone after dark, because it was considered dangerous: but everything they were afraid might happen to me was already happening in my own home.

My parents were always fighting. The fought over everything, and when they fought my dad would take his anger out on us. He would even kick us out of the house. If they argued at night, we all waited for the morning when he woke up. Normally, he would remember whom to blame for the problem from the day before. That person would have a sleepless night.

My mother walked out almost four years ago. Those four years were the darkest of my life, which includes the two months I was on my way to Europe. My parents weren’t getting along at all, but my mother couldn’t divorce him. At that time, we were young, and she couldn’t support us. In Somalia, men rarely support their children after divorce, and may even abuse them. Over that period, I had to look after my siblings and act as their parents, to protect my younger sisters and make sure that everything was all right. I had to make sure that my brothers and sisters went to school, and that they were ok. It was hard for a 13-year-old child to do everything, as well as going to school. My cousins were even less restrained in the house because my mother was not there. My aunt took over as head of the household, and she did not like us at all.

I began to go to the mosque often. I tried to study religion. I had always heard that God is merciful, and that if you had a hard life then that was because you were not good enough or because he was testing your patience. I thought that I was not doing enough, and that was why God was punishing me. I used to wake up at 4 o’clock in the morning and pray, and after that, read the Koran, and after I prayed the morning prayer I went out. It was 5.30 in the morning. It was dark and everyone was sleeping, but I convinced myself that I was safe, because God was with me and I was going to His house. I was studying the meaning of the Koran in order to become a preacher and serve God. After a while, I started to question what I had been taught. They said that I could not question God, so I left the mosque. I started questioning everything. I told one of my relatives about my struggles with religion. She told me not to think about it, because when she did, it had almost driven her crazy. She told me that you shouldn’t think about things you don’t have an answer for. I could not deal with it that way. I could see there was an answer – but that it was that religion was wrong – and that was why I should not discuss it.

Despite all these other problems, the biggest, most shameful and dangerous one was that I did not like boys. I was gay. I can use that word now, but back then I did not even know what it meant. I began to study the Koran and saw what it said about qawmu lut – gay people: that they should be tortured by the God that made them. The first day I learned about them was not from the mosque. My mother told us a story about a man who got married to another man. He had invited his mother to the wedding, and his mother had tricked them: poisoned them both, and then flown back home. At the time I heard this story I was too young to understand, but as I read the Koran I learned more. I felt guilty and disgusted. I thought God was testing me. And I thought I had failed this test, as well as every other test that God had put upon me since I was five years old. I couldn’t pass it.

When my mother came back, she finally divorced my dad. The agreement was that she must leave the house, and that my father should take care of his children. We all started to leave the house one by one, because my dad acted crazy. He started to refuse to give us money to buy food. He told our aunt to not cook for us more than once or twice a day. He even threw hot water over my sister and scalded her. He kicked me out of the house in the middle of the night because I hadn’t cooked, even though I hadn’t been told to cook, and he choked my brother for coming home late. So, one by one, we left. My youngest sister was the first one to leave. After that, I ran away from Ethiopia to Norway. I didn’t travel by aeroplane. That was not even an option. I travelled by foot and by car. I saw so many horrible things on the way. I saw some people tortured, raped and beaten to death, and left behind because they couldn’t walk for 18 hours non-stop to cross the borders.

When I got to Norway I thought I would have freedom at last, and that people would think differently. But I found that some of the Somalis that had come here before me were even more strict and judgemental than those in Somalia. Everybody was concerned that I don’t wear hijab, and that I don’t dress the way they think ‘Somali’ girls should. They say things like, ‘Fear God. You are a Muslim Somali girl: hold on to your identity. You can easily get brainwashed by this culture.’ I just wish I could tell them that they are the ones who have been brainwashed into rejecting their Somali identities. In an attempt to mimic Arabs, we have lost our Somali culture.

I don’t have anything against religion and our new ‘Somali’ culture, but it is not for me. I am not a girl who can be satisfied by being told that my brother is more valuable than I am because he is a male and I am female, and therefore that I should serve him. I am against a culture that states that you should get married to the man who raped you, because a rape victim is considered to be spoiled goods. I am against believing that I am worth half as much as a man: that I should serve my husband, and never turn him down, because if I do, the angels will curse me. I am not a girl who accepts being told that I should cover my hair because it is Awrah.

I am no longer a part of this religion and culture that cares more about reputation than humanity.