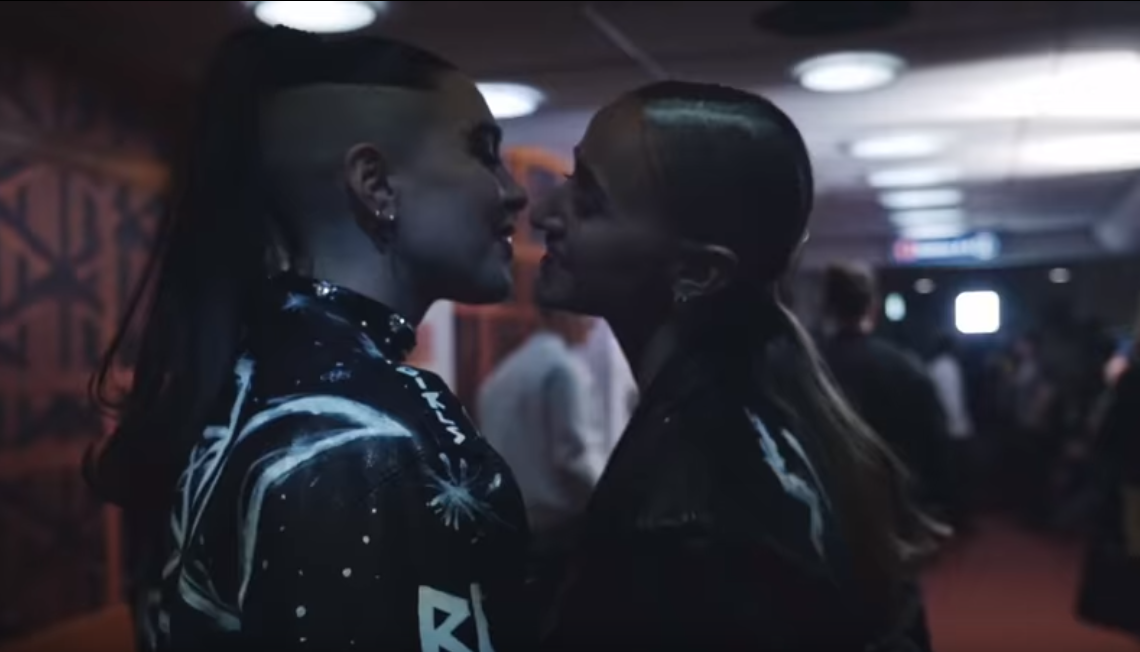 A dispatch from the International Documentary Film Festival

‘I like the sea and the women when they cry/The swallows and the bad girls/Climbing balconies and opening windows/And the girls in April,’ sings Mexican queer musician and artist Chavela Vargas, her extraordinary voice heavy with dissent, pain and passion.

This song, No soy de aquí (I am not from here) ends in celebration: ‘No soy de aquí, ni soy de allá/No tengo edad, ni porvenir/Y ser feliz es mi color/De identidad.’ (I am not from here, nor from there/I have no age, nor future/And being happy is the colour/of my identity). This triumphant final sentence – being happy is the colour of my identity – echoes inside my head.

I saw this documentary film Chavela, directed by Catherine Gund & Daresha Kyi, at IDFA – the international documentary film festival of Amsterdam, during ‘Queer Day’, which presented films focusing on LGBTQ voices from around the world. ‘Majestic and beautiful until the very end of her life, she compiled an amorous résumé that ranks among the most distinguished in the history of twentieth-century lesbianism,’ Benjamin Moser wrote in his Chavela Vargas obituary for the New Yorker. One of these women was Frida Kahlo. ‘Everybody knew,’ says one of the protagonists in Chavela, adding that ‘Mexico is a very hypocritical society,’ where you can be a lesbian on stage, but not in everyday life.

This hypocrisy is also found in Turkey, the country of my birth, where artists like the iconic, queer male Zeki Müren (1931-1996) and the transsexual diva Bülent Ersoy, are both very popular and much-loved figures.

Whilst I am diving into this rich programme, which celebrates queer experiences through documentary film, a ban on all LGBTQ cultural activities in Ankara is announced by the authorities. ‘Starting from Nov. 18, 2017, considering public sensitivities, any events such as LGBT … cinema, theatre performances, panels, interviews and exhibitions are banned until further notice in our province, in order to provide peace and security,’ it reads.

Political and cultural contexts may be different, but the hatred remains the same, whether you are in Turkey, Mexico or the UK. Daisy Asquith, director of the film Queerama, a collage of British Film Institute archives of LGBTQ representations telling the story of the development of attitudes to homosexuality in the UK, explained during the Q&A that while the film was a celebration, it was also a warning cry. ‘The human rights gained are very fragile,’ she said, adding that they are non-existent in many places still, like in Russia, where she was travelling the next day to present her film at another festival.

‘When I first arrived in Istanbul I thought I had come to paradise,’ said Syrian LGBTQ refugee Nader, a few months after living in the metropolis. ‘I was in hell,’ he declares during the Q&A of the documentary film Mr Gay Syria directed by Ayşe Toprak, in which he is one of the subjects. Toprak’s film adds another level to the already complex reality of the LGBTQ communities living in Turkey. ‘For the first time in my life, I wish I wasn’t a Turk or an Arab,’ says Hussein, the winner of the Mr Gay Syria contest, as he watches the Turkish police firing tear gas and rubber bullets at the Istanbul gay pride marchers. Throughout the documentary, Toprak shows how these refugees are at risk from all sides: from their own conservative families, from Turkish society where they awaiting asylum, and from ISIS, from which they are fleeing. ‘The only thing people see when they think of gay Syrians is through the perspective of ISIS killing us,’ one of the participants in the Mr Gay Syria contest says. Toprak’s film is a successful attempt at changing that.  Two of the protagonists, Nader and Omar, were granted asylum in Norway, where they now live safely. While telling the IDFA audience about going to a doctor who had apologised to him after having assumed he was a straight man during a conversation, Nader voiced what every person in LGBTQ communities across the world hopes for: ‘This is what I want everywhere, in Syria, in the Middle East, in Turkey.’

Another powerful documentary was directed by three women, Mika Gustafson, Olivia Kastebring and Christina Tsiobanelis. This film shines a light on Silvana Imam, a hip-hop artist from Sweden and a true force of nature: feminist, anti-racist and lesbian, with Lithuanian and Syrian heritage. This moving portrait follows Silvana from the early years of her music career in 2014 until 2016, and also includes footage from her childhood years – showing us in a very sensible and intelligent manner the cultural and political context her family lived in. We see Silvana visiting her mother’s Lithuanian village and having to listen to a neighbour telling her about marriage and having babies ‘before it is too late’, a discourse every woman is faced with, no matter which geography she lands on. This broken record chorus can be even more painful when you are gay, child-free, or choose to live a non-conformist life. Silvana’s father also appears in the videos, and the struggle and pain of having had to leave one’s country is felt through a combination of these images, and some of the lyrics she intones. Images of family, making music, and falling in love are disrupted with footage of the far-right party’s demonstrations in Sweden. ‘Thank god I am homo’ and ‘Go kiss your fucking swastika’ are lyrics by Silvana which we hear many times in the film. ‘I’m a conscious rapper,’ Silvana says in this interview in Noisey. ‘I write songs about my life, and since I write through a lesbian-immigrant-woman’s perspective, it’s labelled as “political”. I’m letting people know how fucked up the world is through my art. This is about my life and my own survival in this patriarchal and anti-democratic world. A woman who writes love songs to other women causes immediate chaos in most peoples’ minds? That is something you should question, and not whether I’m political or not.’

Chavela, Queerama, Mr Gay Syria and Silvana: four documentaries made by women (yes!) which once again show how important it is to gather as many voices as possible from across geographies to fight against the oppression and silencing of LGBTQ communities. Certain places are without doubt more dangerous than others, as we are witnessing in Turkey. Conservatism, bigotry, hatred against minorities – and LGBTQ communities in particular – know no frontiers, but then, neither does solidarity.

Canan Marasligil is a writer, literary translator, editor and curator based in Amsterdam. She is the creator of ‘City in Translation’, a project exploring languages and translation in urban spaces, and is a co-host of the Not Loud Enough podcast, with Migrationlab founder Laura M Pana. Canan has worked with cultural organisations across Europe.