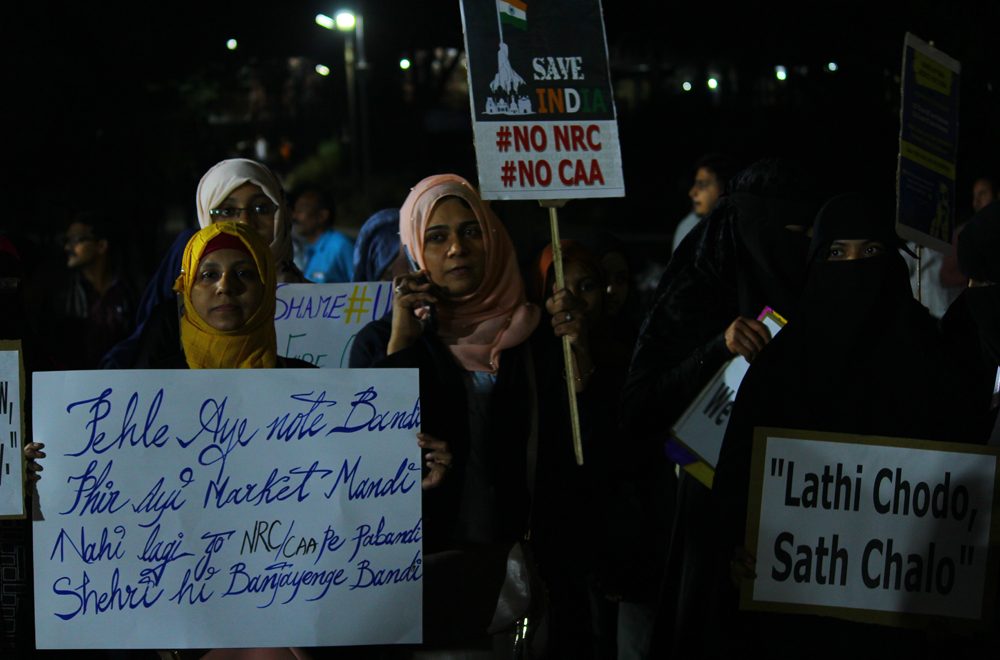 Muslimahs: the new face of resistance

When protests against the CAA-NRC, which has implications for the citizenship status of India’s minorities started nobody expected that it would change the way the world would look at Muslim women in India. Supposedly ‘oppressed’ Muslim women have not only led the protest, but have also become the vanguard of resistance.

The protests against the bill spread from universities to various cities across the country. The highlight of these protests has been the way that Muslim women have become the torch bearers of the protests. Twenty-two year old Ayesha Renna and Ladeeda Farzana from Jamia Millia Islamia have become the face ofprotest against the CAA-NRC. When the protest started in Jamia, very few students turned out until these two girls went around the student residences urging more students to join. A video showing both of them shielding a male student from the police went viral.

As the insurgency spread across the country, many more women took part. On December 15th, around 200 Muslim women from Shaheen Bagh, Delhi held a peaceful protest against the discriminatory bill. Women across all age groups, some with kids with them, gathered to fight for their rights and for the future of their children. Braving the cold weather of Delhi, the women sat chanting slogans, sharing their apprehensions. Their persistence and spirit attracted more protestors to the site. As the media attention grew, the crowd increased massively. People from all around thronged to Shaheen Bagh with posters and placards hailing the ‘sheroes’ of Shaheen Bagh. The old dadis (aunties) of Shaheen Bagh openly declared ‘Kagaz Nahin dikhayenge’ (We will not show the papers).

The Shaheen Bagh ki auratein (women of Shaheen Bagh) inspired similar protests all over the country. Hundreds of protestors came out in major cities like Mumbai, Bengaluru, Hyderabad, Kolkata and Chennai to protest against the CAA-NRC. The protests spread into small towns and rural areas with women staging similar protests. It’s been around a month, and the Shaheen Bagh protests are only getting bigger. Credit goes to the brave women who have left their homes and jobs to be part of the protest.

These women have broken the stereotypes associated with Muslim women. After the present government came to power, Muslim women became the centre of many debates. They have been stereotyped as abla naaris (weak women) who had to be rescued. The furore around the much- debated ‘Triple Talaq’ bill showed that the media had projected a powerless, enfeebled stereotype onto Muslim women. The debate around their choice of dress also attracted a lot of attention, with many criticising the hijab as a symbol of patriarchy; whilst some Muslim women countered this, claiming their clothing to be their own choice. The fact that many women were choosing to wear hijab whilst pursuing higher education and careers illustrated their point of view.

The protests broke all the negative stereotypes around Muslim women. They not only came out in the streets to protest, but also became the symbol of resistance. Not an easy task, especially when the government is determined to implement the bill. The protestors in some places have faced police brutality leaving 25 people dead and hundreds detained. Even this didn’t deter the brave women from protesting.

While you are reading this article the mothers, sisters and daughters of Shaheen Bagh and other places continue to fight for their rights. They have shattered the stereotype , proving their critics wrong. They have become the face of resistance.

Time has still not known your worth

You have fire, not just tears

You are also a reality, not only an interesting story

Your identity is just not a thing of youth

You have to change your destiny

Wake up my life, you need to walk with me

Dr Kouser Fathima is a feminist and activist who writes on women issues with a special emphasis on issues related to Muslim women.