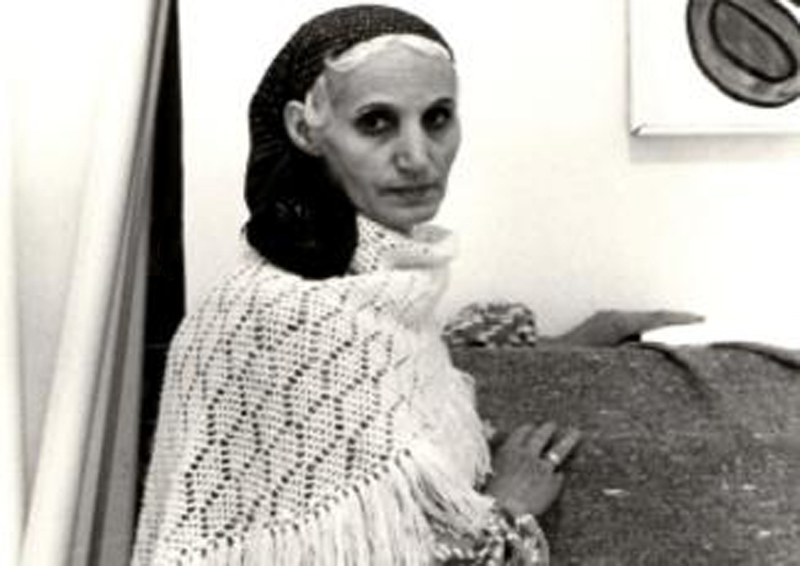 When I paint, I am in another world. I forget everything. My painting is not the reflection of the exterior world, but of my own inner world. – Baya Mahieddine

Baya, an avant garde artist who inspired Picasso, was born near Algiers in 1931, originally named Fatma Haddad. She is best known for her colourful paintings of bold, confident women in beautiful, surreal, natural settings. Her style is marked by fluid patterns and vibrant colours, inspired by Kabyle textiles.

She was born in Bordj El Kifan, a suburb of Algiers, to an impoverished family, and was orphaned at five years old. She was sent to live with her paternal grandmother, a servant on a colonial farm belonging to the wealthy Benhoura family. In 1942, Baya came under the care of the estate owner’s sister, Marguerite Caminat Benhoura, who worked for the Muslim Bureau of Charities. Marguerite assumed the role of adopted mother to Baya.

Marguerite noticed Baya’s talent for art through watching her make ‘fascinating small animals and female figures out of dirt’ at the age of 11. Marguerite was also an art collector and painter herself. She nurtured Baya’s natural aptitude for art, providing her with home-schooling and art supplies. Baya’s artistic development included the freedom to browse the Benhoura’s extensive art collections, which may have included work by Matisse and Magnelli. With Marguerite’s encouragement and these resources, Baya was able to develop her talent, drawing both Algerian and European influences into her own unique style.

The sculptor Jean Peyrissac introduced the Parisian gallery owner Aimé Maeght to Baya’s work. During a tour of Algeria, Maeght visited Baya and decided to include her work at the Galerie Maeght’s international exhibition of surrealist art in Paris in 1947. At just 16 years of age, she fascinated Parisians, appearing like a living embodiment of the fantastic women in her paintings in her traditional Maghrebi tunics and embroidered slippers. She stayed with Maeght and his family over the period of the exhibition, mingling with the artistic elite while her artwork hung in the gallery next to paintings by Braque and Matisse. In the same year, the gallery organised a solo exhibition of her gouaches and ceramic art.

She became an overnight artistic sensation: French Vogue published a full-page profile on her, and she was fulsomely complimented by artists such as Braque, Camus, Matisse and Dubuffet. Some of this praise had a condescending tone, situating the artist as naïve and exotic: André Breton, writing the preface of her exhibition catalogue, described her work as childlike and pure; her supposed lack of sophistication was vaunted as ‘in the tradition of Ancient Egypt.’ It was, in fact, Breton who gave the young artist the name Baya in a florid passage that read ‘[F]or the rocket that launches the new age, I propose the name Baya. Baya, whose mission is to reinvigorate the meaning of those beautiful, nostalgic words: happy Arabia. Baya holds and rekindles the golden bough.’

As a result of her growing fame in artistic circles, she was invited to summer at the Madoura ceramic studio in the south of France, where she spent four years working alongside, and sharing couscous with, Pablo Picasso. He said that she was the inspiration for his revision of the lolling odalisques of Orientalist art in his series Women of Algiers. Baya however found the process of making ceramics frustratingly slow and preferred to paint.

Within six years of her debut, she returned to Algeria in 1953, where she married El Hadj Mahfoud Mahieddine. He was a well-known musician thirty years her senior, who played in the classical Algerian style. She moved to Blida, where she bore him six children, adding to the eight he already had with his first wife. She abandoned her artistic career for ten years over the period of the Algerian War of Independence.

In 1963, some of her gouache paintings were acquired by the Musée National des Beaux-arts d’Alger, inspiring her to return to painting. She participated in an exhibition of Algerian art held in Paris the following year. After the death of her husband in 1979, Baya devoted herself to art and painted ceaselessly. Her art has been exhibited in Europe, the Gulf, North Africa, Cuba, New York and Japan.

Her paintings increased in size and her iconography was now supplemented with musical imagery, drawn from her husband’s profession. Violins, mandolins and harps became part of her symbolic vocabulary, alongside the birds and flowers she had painted in her youth. Her focus on women remained unchanged: ‘If I change my paintings, I will no longer be Baya,’ she stated. Towards the end of her career in the 1990s, she was frequently invited to France in an attempt to co-opt her into the canon of French artists, but Baya remained resolutely attached to her North African identity.

She has appeared on Algerian postage stamps as well as a Google Doodle honouring what would have been her 87th birthday, showing her continuing importance as an artist who, despite a personal and political history predominantly shaped by men, composed paradises exclusively occupied by women.