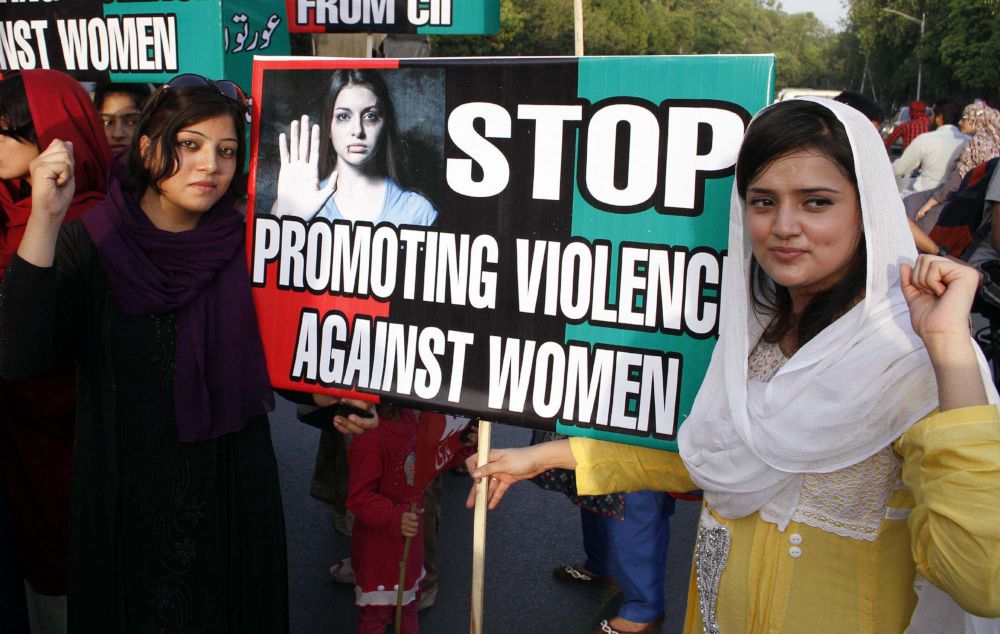 Reviewing the many incidences of rape in Pakistan over the past few months, one is forced to ask: is everything now a sex object for Pakistani men? Everyone seems to be under attack – girl children, boy children, unmarried women, married women, mothers of one, two, and three children, and even animals. It is important to analyse rape as a crime that, although clearly a result of sexual objectification, is actually more complex. We need to ask whether rape is always and only a result of sexual desire and sexual frustration – or can rape be located in something over and above the sexual objectification of the other? For example, does rape also result from a desire to trespass? Is it not the case that sexual objectification forms just a part of a larger whole, the overall social mindset that manifests the desire to indulge in illegal consumption i.e. to consume even at the cost of causing ‘social death’ for the other, and in some cases even physical death?

The victims, the perpetrators, and the observers of violence are all breathing in a highly commercialized world within the context of capitalism. Our individual ‘social value’ is  established by our ‘purchasing power’, our ‘material possessions’ and yes, the ‘credit’ that’s made available to us by global banks. We too are incessant, compulsive consumers, paying and consuming within capitalism. Many people want to consume but cannot pay the price and stay out of the game. And then there are those who want to consume without purchasing. Globally women are treated as commodities. With genuine reservations, let’s accept for the sake of argument that women may be considered commodities that men want to consume. But even then, rape cannot be explained fully. Sexual services may be purchased. Why rape women, rather than purchase these services? The fact is that the drive to experience exhilaration by enslaving, consuming, abusing, and destroying the vulnerable and exploitable ‘Other’ lies at the core of rape. Indeed, prostitutes too get raped: paying for sexual services is not enough for a rapist. The concept of consumption has been used historically to mean: to destroy, to waste, and to use up. Rapists in Pakistan have been attacking the vulnerable, who cannot report them, including children. When consumed, victims are quite often killed, their bodies thrown in a garbage site.

In addition to the greed of consumption, rape stems from the human tendency to overpower and enslave the weak. In Pakistan, not only women and children but also marginalized men are trapped in bonded labour, a form of modern-day slavery. Enslavement is subordination and discrimination involving forced labour in servitude. Enslavement is a cost-effective tool used for domination, abuse, stigmatization, and consumption.

Enslaving practices constitute both ‘social control’ and ‘violence’, where violence is the physical defeat of, and destruction of, one social actor by the other social actor. A rape victim, at a given point in time and space, is literally and metaphorically enslaved to provide free sexual labour causing their social death (through the stigma attached to the act, a taboo so great that persuades victims to withdraw from society) which may lead to their physical death i.e. either the victim is murdered or takes their own life.

Both in modern and ancient times and across continents, massacre has had a gendered aspect. Kidnapped women were the first form of human property for the perpetrators of massacres. In ancient Middle East and Greece, it was a common pattern of warfare to execute men after conquest, but to take women as captives; to rape and subdue them. Men were almost always killed while women and children were dragged along, enslaved, abused and conquered. Rape is a common concomitant, a bonus to the main crime (which can be murder or theft). Rape is taken as an opportunity for some extra illegal consumption; to feel the rush stemming from the destruction of the defenceless. In conflict zones, rape is a usual accompaniment to other war atrocities. Jane Addams at the Hague Congress in 1915 noted that: worse than death (…) is the defencelessness of women in warfare and their violation by the invading soldier. In wartime and within conflict zones, rape is used as a weapon. It is also used to coercively cause ethnic and demographic modifications and to brutally rewrite the social and political histories of vulnerable populations, for instance the mass rapes of Bosnian Muslim women at the brutal hands of the Serb Communist Army, with the resulting pregnancies leading to the birth of a lost, undefined generation.

The degradation and humiliation of conquered women is considered central to victory. Conflict zones and displaced communities report many cases of rape and child abuse. There is a high sense of insecurity within temporary camps set up for displaced populations. It is important to realize that although rape can arise out of conditions of conflict it is a direct result and expression of the attitudes men have towards women during peacetime.

Rape is highly political, because it is first and foremost a crime of domination, not only against women, but against marginalized and subordinated men and also children.It does not take place as a single crime against one individual. It forms our social histories and defines us as societies. What we were, what we are, and will be. When enemy forces occupy territories, sexual abuse and assault are considered war crimes, with the hope that these will end with the end of the occupation, and that the International Court of Justice will deliver. But what happens if a free, independent nation begins imploding with cases of rapes and gang rapes which threaten to become the new norm, the new routine? Pakistan is one such case-study that has been experiencing a severe rise in gang rape crimes.

Unfortunately, despite a strong history of women’s rights activism in the country, the governance machinery is ill-prepared to handle this crisis. It is time for Pakistanis to consider what kind of Pakistan they want to live in – and to take steps to make this happen.

This is the final of a ten-part series. To read the previous parts please click here.