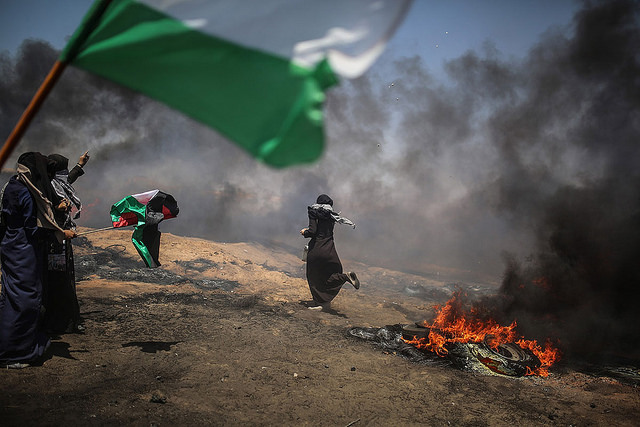 I was born outside my original village. Because of ‘ethnic cleansing’, I have never smelled the rain on the shore. I have never seen our house. I have never tasted the bread that my grandma used to bake every sunrise; but I still know about every single spot, taste, flavour, bird and tree in my village.

The year 1948 is the most crucially important historical moment in the lives of all of us Palestinians. Seventy years ago, we refused to give up our land, homes and hope of independence, whilst the Zionist project was ripening; emptying the land and erasing our memories. Zionist gangs and armed groups slaughtered and killed my people viciously. Many massacres and atrocities were committed against elderly people, pregnant women and innocent children. The land was forcefully depopulated of almost all of its indigenous inhabitants.

We were forced to evacuate to neighbouring regions such as Jordan, Egypt, and Syria. We witnessed the loss of our country and the murder of our loved ones. Since then, the national project to liberate Palestine has been recognised as a shared and collective duty of the whole community, regardless of their class or sex. Women, as part and parcel of society, have shouldered the responsibility to seek freedom and demand the return of stolen territory side-by-side with our male counterparts. We have participated in demonstrations, organised, and fearlessly led our people in the face of violence and Israeli brutality.

Popular resistance is not merely an outcome of misery and oppression; it is a weapon, a way of breathing when the tear gas is suffocating. Under Israeli settler colonialism and the apartheid system in Palestine, occupied people have no means to defend themselves and their families. Women are the first ones to shout out, and rebel against the injustices imposed upon them and their communities.

We – the protesters in the great return march – are ordinary people. We come from all sectors of civil society. We are women, men, old and young. We have decided to move towards home. We are rebelling against the Bantustans that Israel has trapped us in where we cannot live in dignity.

The whole world is watching: the European Union, the United Nations, the United States and Arab governments have turned a deaf ear. They are not concerned about the atrocities committed by apartheid Israel; the bloodbath that is drowning our children. Instead, they ask us to keep the demonstrations peaceful. All because we approach our stolen land and demand the right to live in dignity, with security in the prison they created for us, deprived of basic necessities like food and clean water.

In Palestine, borders are marked by checkpoints, humiliation and apartheid. Mahmoud Darwish, a notable Palestinian poet, wrote in his poem ‘Unfortunately’, ‘I am from here, I am from there, yet am neither here nor there.’ Here means exile where it is cold, dark and cruel, and there means the lost Palestine.

‘The only solution available for us is to break the fence and go back to our lands. It is a peaceful way to snatch our rights from the occupier. Then, no one will utter the words “terrorist Arabs”.’ my mother said, with full conviction. After a long sad day in March, I heard that Yasser Murtaja, a young journalist was martyred. When my mom heard this she said, ‘I wish that all the protesters today had been women. Then let Israel shoot us and show the world how illegal and criminal their state is.’

‘A woman’s beauty is in her femininity and her weapon is her brain. So where are these traits in the vandal’s personality?’ tweeted Avichav Adaree, an Israeli army spokesman, lecturing Palestinian women on how to be ‘good women’. In another tweet Adaree says, ‘The good woman is the honourable woman, who takes care of her home and her children and serves as a good example to them. However, the depraved woman who lacks honour does not take care of these things, acts wildly against her feminine nature, and cares not for how she is seen in society.’ Israel takes pride in their ‘open and free’ society, yet a misogynistic attitude towards Palestinians remains, which not only separates us from other women but also dehumanises us.

On May 14, whilst Adraee was teaching us how to be ‘honourable women’ and take care of our children, the ‘moral’ Israeli snipers turned our Great Return March into a massacre. Explosive bullets, which are banned by international law, killed 60 people and injured more than 2600. Of the thousands injured more than a hundred were women, hundreds of whom had walked to the buffer zone from all over Gaza. The Israeli war machine ended their ability to walk, because many had to have their legs amputated because of the damage from the bullets. Palestinian women who take care of their children and homes, as well as fighting for their rights have now been limited in their ability to live productive lives.

Mustafa, my brother, is 29 years old. He was shot on May 14. He, unlike many others, was lucky. The bullet that penetrated his leg was not explosive. Snipers hide in hills that have belonged to Palestinian families for generations, killing over 100 protestors. Remember, that the earth beneath your feet doesn’t forget; neither will the millions of Palestinians in Gaza and around the world.

Intimaa Alsdudi, is a Palestinian writer and gender consultant based in Gaza Strip. She is interested in documenting the oral history of the Nakba.