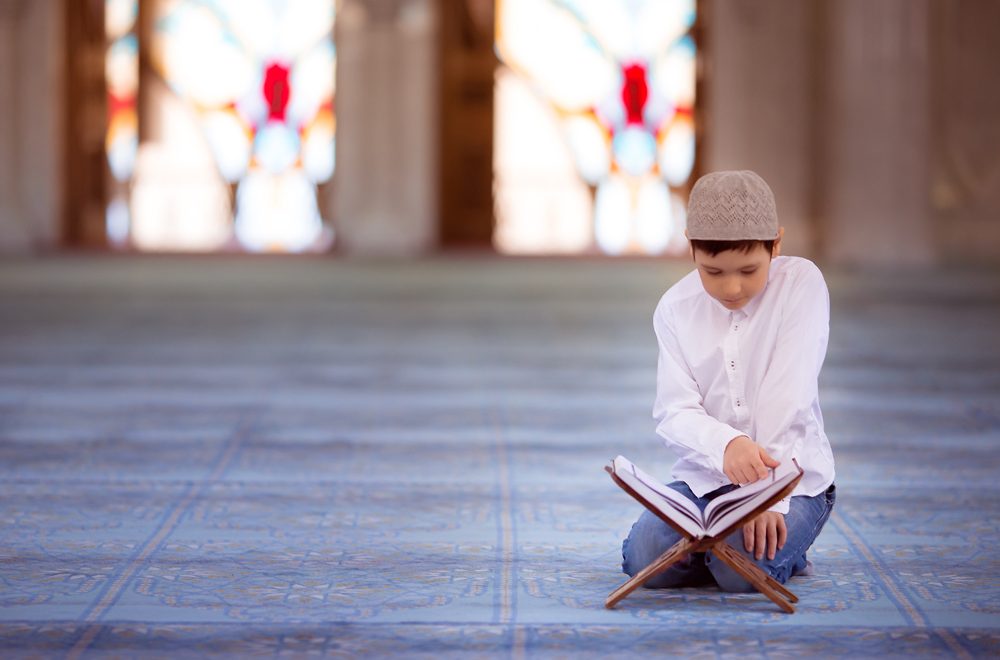 My ten-year-old son has become inquisitive about Islam. He is slowly discovering it through my answers to his questions, through books and mostly through the Internet.

There is only so much I can tell him though. What I really want is for him to discover things on his own. All I insist upon is that he must use his head, he must use his heart, he must doubt and doubt some more, he must not repeat words like a parakeet but understand what he is saying, he must not make gestures like an automaton – but pray with conscience and presence.

I grew up in a non-Muslim environment (Paris, France) in the 70s and 80s and my religious education was to have an Arabic/Islamic history teacher come to my house every Saturday morning. It was boring, I admit, but it was soft shall we say. There was no Internet. I would see my parents pray and my mother do Ramadan. When I went to Morocco, I saw my grandparents pray. They all were very humble and discreet about their faith. If I asked questions, they always answered intelligently, explaining things via a gentle and quiet path. Overall, Islam was a loose cultural frame, nothing more.

When I went to college in the US, both at undergrad and grad level, I took classes on Islam, from politics to theology and law. I learned a lot, and discovered Sufism. Sufism was talked about at home mainly through poetry. My father had a small book of Ibn Arabi’s poems on his desk, and I came to realize that my maternal grandfather’s serenity, silence and wisdom, were very close to what I had read in the words of Rumi and Jami. He was highly respected as an ‘ulama’ (teacher of Islam) and very open minded.

What made sense to me was an approach that was inquisitive and spiritual at the same time. The mind remained open as one read, and as one prayed. God was not out of reach: through one’s thoughts and experiences of life, one could actually come to realize that He was within all of us, indiscriminately. Around me, interpretation was encouraged and welcomed; the word ‘blasphemy’ was never pronounced – or even thought of – and one could experience the joy, wonders and unity that the poet Hafez so gently taught us. The fact that I put as much zeal in reading about other religions as I did into Islam – as I still do today – helped me greatly.

Now I am a single mother of a ten-year-old, also in a non-Muslim country (this time Mexico) and he is asking, inquiring, searching. There is me, there is my family when we visit Morocco, there are books and there is the Internet. Given the nature of his search, I do check what he sees as I do worry.  Just put ‘Islam’ in Google or YouTube and you will see. Search engines are not objective.

What he has found are good instructive videos on technical aspects, such as the time of prayer, the number of raka’at, how to wash (‘udu), the pillars of Islam and what they mean. So far so good.

But when he inquires further, the videos become self-righteous, with little room for questioning or thinking. There are educational cartoons made for young Muslims growing up in non-Muslim countries (especially in the US and the UK), but they are idiotic beyond belief. They are funny, if you can see beyond the idiocy of repeating ‘subhan allah’ every other minute and showing six-year-old girls in a hijab. They do no harm, so it is fine within limits.

On the Internet, I have not found a single programme where the issues are debated, explained and presented in a way that is intellectually challenging. There are no documentaries that show the history of Islam without falling into either mind-numbing exaggerations of greatness, or intolerance. There are no documentaries that accurately teach how the Quran was put together under the Third Khalif Uthman, or that the Sunna was redacted two centuries after the death of the Prophet, or how the gate of knowledge and inquiry (Bab al Ijtihad) was closed more than 800 years ago.

Yes, he can read the Quran, but as we all know it is confusing, illogically organized, contradictory in many ways, and it has no punctuation in Arabic (so we do not know if a phrase is a statement, a question or an exclamation). It is very hard to make sense of it all. The idea that he should read it and accept it blindly, does not work for an inquisitive 10-year-old (nor for his mother).

What worries me is the self-righteousness of all these programmes and documentaries. They force the child to believe without thinking, without doubting, without going beyond the mechanics. Nothing speaks of kindness or pardon or generosity (unless mandated by zakat) and worse yet, nothing speaks of humility. I was raised thinking you prayed quietly in your room and did not flaunt it. These days, maybe as a reaction to a general anti-Islam sentiment in the West and radicalization in the Muslim world, many actually do flaunt their religious practice.

Equally, the self-righteousness that imbues all these videos gives a sense of superiority and a certain aggressive feel to Islam. It is either this or nothing, either you follow to the letter and if not, you are a kafir. The implications are not to be belittled. As I told my son, ‘Faith, no matter the religion, is a source of humility and acceptance, not superiority.’

Self-righteousness, that seems so pervasive in Muslim society these days, also brings a blind acceptance that forgoes rationality. And yet, the phrase ‘will you not reason’ appears in many Surat (Surat Yunus, Imran, Anfal and more).

I know that many Muslim thinkers are moving forward and asking for a rational approach, for revisions through informed discussions, and for reform. But little of it is reaching the mainstream. Meanwhile videos of mind numbing Quran reciting competitions abound.

Nowhere is the beauty of the ‘Iqra’ (‘read’), the first word revealed, even mentioned — a word that calls upon all to read with their mind and their heart, a most revolutionary concept for the seventh century, and which is reduced to ‘recite’ in so many interpretations and translations.

My son is discovering part of his heritage. I must add that it goes together with discovering more of his Arab roots, beyond the food, the language and Oum Kalthoum. It is, I think, a good thing, and I am happy he started it on his own. It may be just a phase, but it still needs to be mind-opening.

I know a lot rests on my shoulders, especially as a single mother, and that my way of living, my ability to be compassionate and kind, will influence him more than any book or documentary. But the world is not as kind as it was a generation ago, nor is it as tolerant within and around Islam. So I have to do my best to find the proper balance between self-discovery and guidance.

As I told him recently quoting Ibn Arabi: ‘There are as many paths to God as there are breaths of creatures.’ I pray he understands and lives by it.