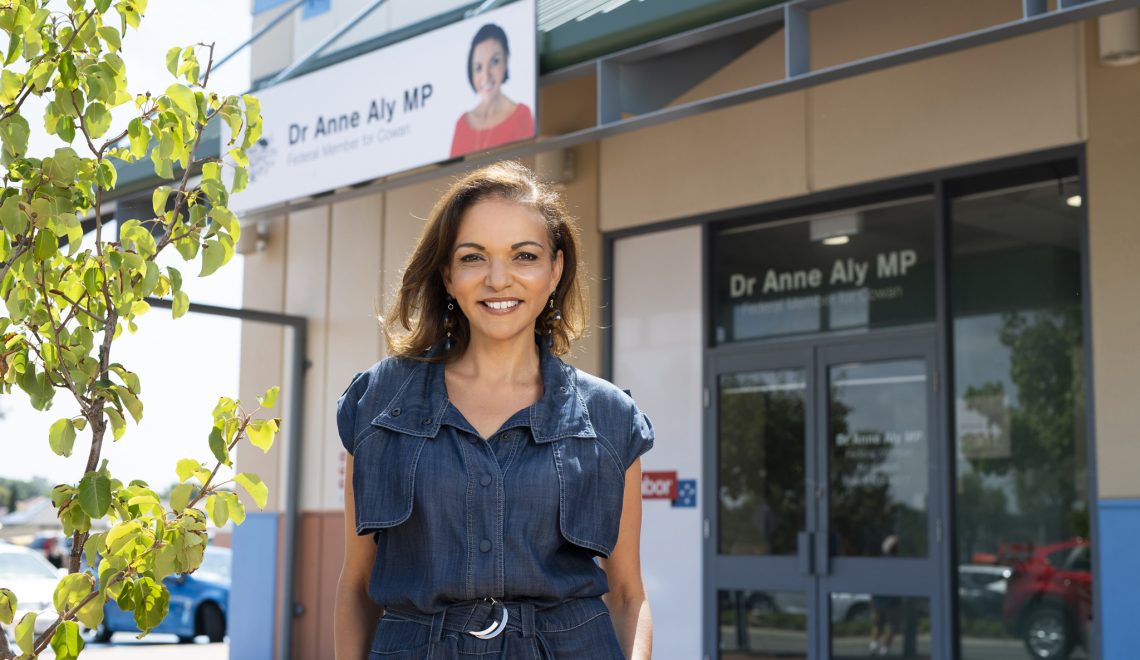 A force for change

Anne Aly represents the electorate of Cowan as the first Muslim parliamentarian in Australia. She is a professor, lecturer and academic specialising in counter-terrorism and the founder of People Against Violent Extremism (PaVE). sister-hood asked her about her work and her accomplishments.

You were the first Muslim woman elected to Federal Parliament. What has that achievement meant to you and your family?

It wasn’t really something that I set out to do – to be the first Muslim woman in Federal Parliament – and it wasn’t my primary motivation for running for election.

It wasn’t until after the election that the significance of it all dawned on me, when a mother called me to tell me how much it meant to her daughter. Being elected to Parliament is an achievement for anyone, but for those of us from minorities and especially for women from minorities it is more significant. I grew up without any role models in politics or the media who looked like me.

It’s more than just symbolic, because it means that I have an incredible platform to advocate for change and to ensure that the policies we make at the national level do not adversely impact on minorities. Right now, only around 4% of federal parliamentarians come from ethnic backgrounds – that’s compared to around 25% of the population – so we are underrepresented. Just being there can be a force for change.

I hope that my time spent in Parliament can contribute to a more inclusive society for all Australians so that everyone can participate in the social, economic and political life of the country.

You’ve spoken and written about your family’s journey to Australia and living a ‘double life’ between cultures. How has that affected you over the long term?

I see it as an incredibly positive opportunity that has given me the kind of experience that builds empathy and the capacity to understand different points of view. I think that is an essential value in leadership. I’ve been fortunate enough to be able to use my understanding of both cultures and take from them the best aspects. It can be very empowering and it also offers an exceptional opportunity to be able to see different sides to an issue and understand different points of view.

You decided to study the causes of radicalisation after 9/11. What did you want to accomplish?

I really wanted to contribute to a more nuanced and evidence-driven understanding of the issues of violence, terrorism and radicalisation. Too much of the discourse is dominated by ill-informed assumptions that bear little truth and are not informed by evidence. So my aim was to understand this phenomenon and find solutions that were effective.

You’ve talked about how we haven’t properly dealt with the impact of 9/11 on young people. Can you explain what you mean by that? What needs to be done about it?

There’s no doubt that 9/11 was a defining moment in history. But in the aftermath of the attack the world was in a state of shock. The immediate response was military action, but there was little consideration given to how we deal with the impact of the tragedy on a broader scale.

The attacks were witnessed by a world-wide audience through space and time and beamed into our living rooms. Children, as well as adults, witnessed death and destruction, but discussion about the events was stifled by a singular focus on the military response. So we had an entire generation of young people who grew up in a post-9/11 world and we let them down.

We let them down because we didn’t talk to them about it; we didn’t educate them about violence and conflict in a modern era in which dissident individuals and groups can cause so much loss and so much pain. We didn’t deal with the impacts of witnessing such tragedy on our individual and collective wellbeing. We didn’t offer our young people ways to deal with the trauma. I think that’s because we (meaning adults) probably didn’t know how to deal with it ourselves.

Along with the Bali Peace Park Association, I developed the Beyond Bali Education Package that was designed for Australian schools as a tool to help teachers breach the subject of terrorism and violence with a focus on conflict resolution. We need to teach young people that there are peaceful ways of resolving conflict and disagreement. I think in the age of social media, this is more important than ever.

How do you explain the disparity between men and women in extremist movements?

Women have always played a role in conflict. I think there is a misunderstanding that somehow women are passive in the violent extremist movements when in fact they often play a very central role – either in a supportive or active capacity. The whole trope of ‘jihadi bride’ really doesn’t capture that. It puts women in a passive role in conflict, when in fact many women who travelled to Syria and Iraq played significant roles in recruitment and support.

However, there is no argument that recruiters to violent extremist causes target young men – specifically those who are disenfranchised or angry. There is certainly a gendered element here.

Can you outline how radicalisation can be tackled via political means?

The first thing is to understand that political rhetoric is important. When politicians say things that pander to extremist elements, it gives a tacit nod to their activities, which may include violent activities.

Secondly, political will is needed to recognise the issue and to define the problem in ways that advance effective solutions. For example, defining violent extremism simply as a law enforcement issue means that we only ever end up with legislative remedies. Australia has some of the most rigorous and broad sweeping laws in relation to terrorism of any western country – but laws do not stop radicalisation. The problem needs to be defined as a social issue and remedies need to focus on the environmental and social drivers of violent extremism.

Thirdly, there needs to be a recognition that violent extremism is not the purview of just one or two communities – nobody becomes radicalised in a vacuum – their environment, the social conditions and global events play a significant role. We may not have much control over global events but we can control how those events impact on our society.

Finally, we need to be proactive, not reactive. We need concerted efforts in prevention and countering radicalisation instead of just ways to deal with those who have already committed an offence.

You were elected to the Australian Parliament in 2016. What drew you into politics?

There’s been a global backlash to immigration across the developed world. How has that impacted Australia?

It has impacted Australia insofar as it has influenced the rhetoric of certain politicians, who have jumped on a populist bandwagon because they think there are votes in exploiting people’s genuine concerns and grievances.

People are genuinely concerned about housing and congestion and the economy. It’s very easy to blame the migrants for taking your job or pushing the cost of housing up or down or taking all the seats on the bus or train – but it is not true. In times of economic pressure, people will always look to blame the ‘other’- and some politicians have conveniently labelled Africans or Middle Easterners or Indian migrants as the ‘other’.

Your autobiography is called ‘Finding My Place.’ Where do you see ‘your place’ to be – both now, and in the future?

For now, I want to stick to being a parliamentarian, but I am not a career politician. There are a few things I’d like to achieve in this role before I take on the next challenge. I’ve never really had a plan for my life beyond a few years at a time- so I’m open to whatever life has to offer and wherever I’ll end up.

I guess ‘place’ is something you never really find – which is the whole point of the book really. ‘Place’ often finds you and wherever you are at any given time is right where you were meant to be.