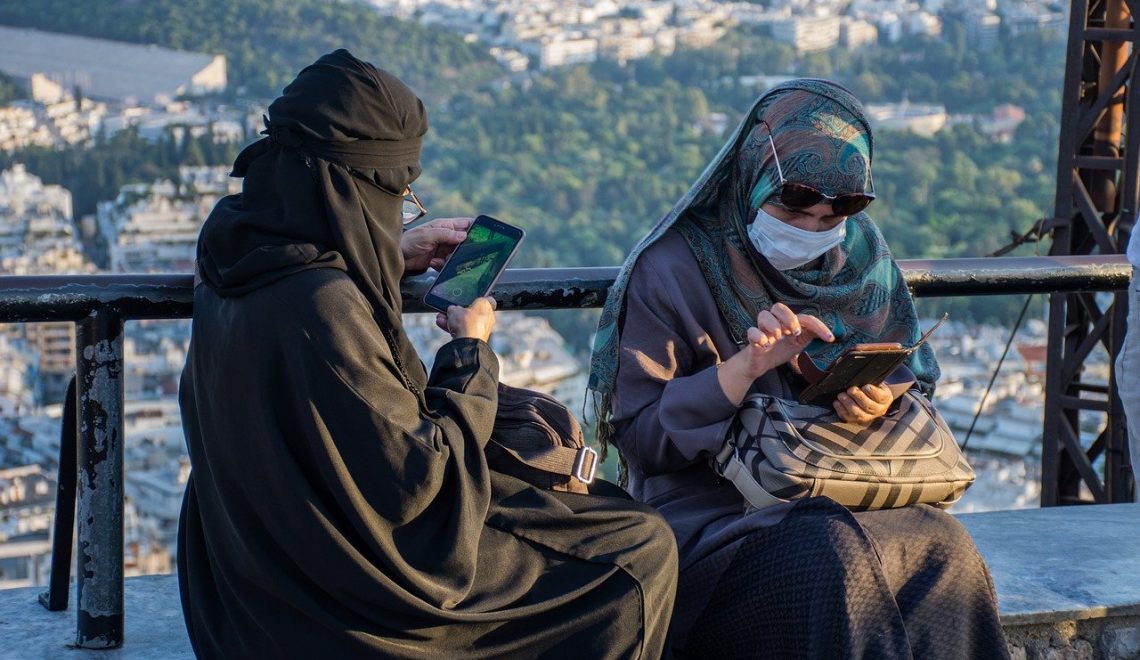 The false equivalence of masks and veils

The unprecedented outbreak of COVID-19 has challenged human attitudes. Our lives are dictated by the new uncertainties; we are developing new habits. We have been pushed into isolation, while wearing masks and maintaining a two-metre distance have become the new normal. In England, it is now compulsory to wear face coverings on public transport.

COVID-19 has led to people wearing face masks to limit contagion. This has triggered comparisons between the practice of making face masks mandatory for health reasons and the tradition of wearing full-face veils in some Muslim cultures, such as, niqab or burqa. This is disingenuous, and runs the risk of negatively impacting vulnerable women of Muslim heritage who are trapped with abusive families during the COVID-19 lockdown.

Some left-leaning people are trying to equate mandatory face masks, used to prevent the virus from spreading, to the practice of niqab. This allows them to push their narrative on face-covering bans, which exist in some Western countries. They are exploiting a precautionary measure, used to prevent a deadly virus from spreading, to create an opportunity for virtue-signalling and political point-scoring.

The full-face veil represents a misogynistic ideology, deeply rooted in Muslim culture. Portraying it as a convenient and adaptable item of clothing gives the impression of a benign religious tradition demonstrating a shallow understanding of women’s rights abuses in Muslim communities. Religious conservatives are capitalising on public fears during the COVID-19 crisis as a way to promote their holier-than-thou mindset and to normalise misogynistic religious traditions of covering women from head to toe, regardless of their consent.

Women and girls have been disproportionately affected by violence during the COVID-19 crisis around the world. They carry out the majority of formal and informal caring work during the pandemic. The WHO has issued guidelines for women to seek help if they are experiencing domestic violence at the hands of their family members during lockdown. In Britain, victims of domestic abuse have been exempted from the lockdown rules. But unfortunately, many vulnerable women and girls of Muslim heritage remain trapped in their own homes with no one to turn to.

British activists have warned that domestic abuse victims in faith communities are facing difficulties getting help, and that a lengthy period of lockdown has exacerbated their miseries. Victims may face ‘spiritual’ violence, meaning that they are coerced to stay with abusive partners by so-called religious leaders, as well as family and community members leveraging their faith against them. Gender apartheid in conservative religious households has exacerbated pre-existent gender based violence. Orthodox Muslim communities are not an exception. But there is hardly any discussion about why these women face this unabated ‘spiritual’ abuse in their own homes.

‘Can the Islamophobia be any more transparent? The French government mandates masks but still bans the burqa.’

He was called out by human rights activist and academic Elham Manea along with many others. She tweeted,

‘The tweet &Washington post article ignore the ideology that enforces covering women’s faces: it treats women as legally minors; insists on male guardianship; permits husbands beating; supports child marriage AND slavery. Or have we forgotten ISIS? The two are not the same.’

Wearing a mask during the pandemic is a means of protecting other members of the community by abiding by government instructions to prevent the spreading of the deadly virus. It is in no way equal to the practice of wearing niqab or burqa which has been used as a tool to undermine women’s rights. It is an entirely false equivalence.

Also, associating wearing burqa and niqab with the potential for radicalisation is not merely Western prejudice. Regions with majority Muslim populations, such as Egypt, Morocco, Tunisia, West African countries and Iraq share similar concerns over visual markers of radicalisation. They have banned full-face coverings in educational and public places, citing similar security and radicalisation risks to Western countries. In 2018, full-face coverings were banned in an Indonesian Islamic university in a bid to maintain Indonesia’s indigenous culture and to curb Islamic fundamentalism on ] campus. Islamist organisations pressured the university administrators to lift the ban, which was rescinded after a week.

The positioning of Islamic veiling as a matter of choice for women needs to be challenged. Male control over women has largely been normalised in conservative Muslim societies. This was shown when an Indonesian Minister unabashedly compared his country’s efforts to stop COVID-19 spreading to a husband’s control over his wife.

The concept of modesty blurs the lines between religious obligations upon women and male power, control and coercion. Being ‘obedient’ to male family members (father, brother, and husband, etc.) is a religiously assigned duty to women in Muslim households. Men are positioned as protectors of the house, and violence against female family members may be considered religiously sanctioned if done to ‘discipline’ them.

Islamic veiling is a visible characteristic of a highly conservative and misogynistic culture that conjures up the concept of a pious, modest and godly woman who is obliged to comply with man-made arbitrary standards of modesty and piety. Moreover, women are often required to cover themselves regardless of their consent. Otherwise they are liable to discipline, punishment, ostracisation, alienation and stigmatisation by which they are taught the consequences for not complying with ’divine law’. Religious teachings are cited to justify controlling women. This is why many women of Muslim heritage suffer in silence in order to comply with the ‘divine law’. Women are devalued and dehumanised in such cultures; reduced to mere objects created to serve men’s desires.

So-called modesty veiling doesn’t protect women from sexual assault or sexism. It infringes on their basic human rights by obscuring their visibility. Some women claim to wear these garments out of choice. But many women are struggling to free themselves from so-called modest attire and the human rights violations that enforce its imposition.

Iran has unjustly detained two iconic women’s rights activists, Nasrin Sotoudeh and Narges Mohammadi, along with many other activists, for protesting mandatory hijab laws. They have been subjected to grave human rights violations in prisons which are effectively an incubator for infections such as COVID-19. Saudi women activists have been imprisoned for peacefully protesting against the former ban on women drivers, and for advocating for the abolishment of the oppressive male guardianship system. The Saudi government has used COVID-19 as an excuse to delay the trial of Loujain al-Hathloul, a prominent Saudi rights activist. She, along with other female activists, remain in detention.

Just as far-right bigots and extremists are using the COVID-19 crisis to peddle hatred against minorities and immigrants, religious fundamentalists are using it to promote full-face coverings while sugar-coating the harsh realities that women face in Muslim societies. We cannot allow a temporary practice used to protect public health to be exploited in order to justify regressive, patriarchal customs which discriminate against women and girls.