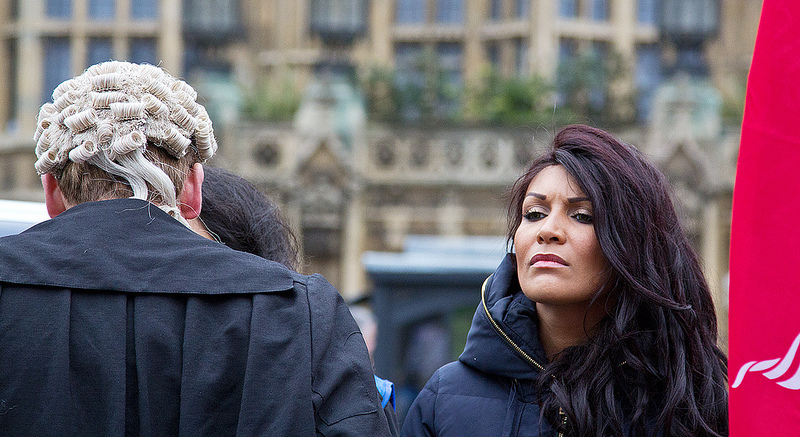 Ambitious and forthright women need to calm down. How dare such confident women swarm in and take anything but the lead? Show-offs. Who do they think they are? Men?

Us women are considered selfish if we do not conform to playing the nurturing caregiver in the home that we have been socialised into. Any display of confidence indicates that a woman might not allow herself to be treated as subservient, and thus this threatens the balance of power within the structures and relationships that she enters. God forbid that a woman looks you straight in the eye, stands alongside you, and is proud of her own achievements. Using terms like ‘overambitious’, ‘arrogant’ and ‘self-centred’ shames a woman into giving up her power. It tries to convince her she is not worthy of her position. We have been conditioned to be unassertive and compliant. So when one of us makes the choice to break the mould, that woman suddenly becomes enemy numero uno– and not just to men but to women too. After all, patriarchy is a system, not a male-only phenomenon.

The patriarchal system also pervades the ingrained view of women as sexual objects, regardless of how she dresses. It is not the woman that should lower her gaze by virtue of the man’s inability to control his desires. I mean, have you seen the way these men walk around and reveal such meaty packages in their crotch area… Anyone would think that they are asking for it, no?

Am I being a bit too provocative? Oh, I am sorry… (not sorry).

It is time for us to become the fire, rather than to fear it.

Let us not be held back and deterred by labels.

May the times that patriarchy and white privilege rear their ugly heads make us stronger, and more determined to break down social and cultural barriers, such as entering the most prestigious professions, such as those in the legal sector. We should be encouraging more women to brag about their achievements and to feel good about their own self-worth: it is only then that they will stand up and make their voice heard.

I am not trying to say that all women want to be in positions of leadership and power, as neither do all men. After all, freedom comes from choice and the ability to move up the socially constructed ladder called ‘social mobility’: a vacuous term that makes social stratification sound like some sort of 90s video game.

However, the question is: do we all have that choice?

If you were lucky enough to be born in sunny suburbia and had an ideal family life and went to a prestigious school, then there is no doubt that you will have had a better chance at succeeding in getting into one of the top universities, and thus entering a career higher up on the social ladder.

When you have to worry about whether your paycheck can feed your children, or whether your partner will be giving you a beating tonight, social mobility is at the bottom of your priority list. Politics is also a privilege. One’s socioeconomic status is dependent on income, wealth, and social status and along with other factors such as race and gender determines the privilege and power you are awarded in society. A fair and competitive meritocracy isn’t just achieved by eliminating financial barriers. There also has to be a positive effort to break down the social and cultural walls that dissuade people from entering particular professions in the first place.

Why should the lottery of your birth dictate your destiny, or deny you a particular success? What is it, other than someone’s intellectual capacity that limits his or her potential? Society needs to think about its structures and those structures that hinder the unlocking of potential. Children should not think that they alone are the reason.

It is still relevant to address how structural discrimination seems to define us in a country where the Old Bailey’s first non-White judge was mistaken as a defendant. Last year, it was assumed that I was my barrister’s client, rather than her pupil. I was shadowing her in the Asylum and Immigration Tribunal, where asylum cases for Iranians who convert to Christianity are common. Instances like these show an inability to look beyond particular characteristics. If one’s face does not fit, or if one has not followed the prescribed Oxbridge or Eton-Your-Heart-Out system propagated by traditional and conservative professions or institutions, then you are an outcast.

If you have been brought up surrounded by Harry Potter-esque dining halls and castles where Rapunzel lies dormant, and you’re used to strutting your stuff in long black gowns like Severus Snape, you will be pre-destined to ‘fit in’ and thus succeed at the bar, which is one of the most privileged positions and high profile-professions to hold in society. Yet, surely being an Oxbridge candidate is not always a pre-determinate for one’s success. I mean, the law and its application can be learnt through training and determination, but there are some qualities that can never be learnt, such as character.

The law should lead the way in terms of its role in changing harmful social and cultural practices against women/girls and other protected characteristic groups. By this, I don’t just mean the law per se, but rather the application of law, its procedures and structures. Otherwise, its functioning would be contradictory to its substance.  The law may be generally reflective of the society we live in, but what about the people that apply the law? Should they not also be representative? If judges and barristers are not reflective of our diverse communities, then surely public confidence in our judiciary will dwindle. I am not saying there haven’t been improvements in diversifying this profession along with others – but there is always room for improvement. People from non-traditional backgrounds are definitely moving up the ranks but will the Bar remain cemented in an archaic system? Only time will tell.

This article doesn’t aim to be a bitter expression of victimhood but merely an articulation of what work still needs to be done to have a more inclusive approach to education. I definitely do not wish that I came from a different background. I am myself and I love who I am. Everyone has their own privileges, whether they recognise them or not. For me, there is something sweeter about attaining my goals, despite some difficulties. With positive thoughts and determination, you can achieve anything you put your mind to.

Glass ceiling – are you ready for us?

Leila has a burning desire to fight injustice & advocates for the rights of women. She was recently involved in a BBC Three Documentary, which documents her path towards becoming a barrister. She loves to throw mad shapes on the dance-floor.