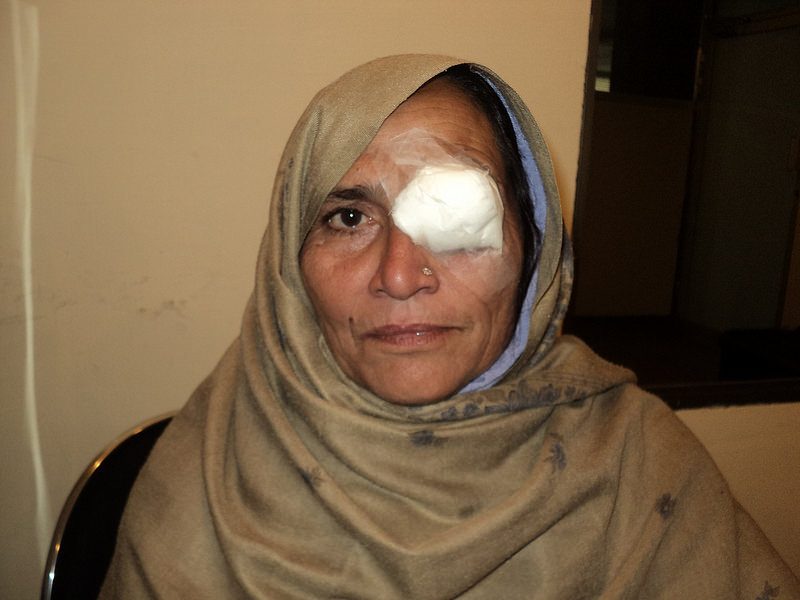 While the world has been engrossed in the US elections and mourning Brexit, 500 Kashmiris in Indian administered Kashmir were blinded last summer. This is the modern world’s first mass blinding. Kashmir has become a sinister purgatory, where the Kashmiris’ sin, their plight for freedom, is punished.

Once known for its heavenly beauty, Kashmir is now home to the deadliest military occupation on the planet, while world powers remain in their cushioned positions of ignorance.

India has painted Kashmiris in the colours of terrorism. Rather than recognising that this conflict is permeated with human rights violations which require a solution based in political dialogue, India has labelled Kashmiris as jihadists and as extremists financed by Pakistan. This mischaracterisation by the right-wing media has allowed the country to become part of the so-called ‘terrorist problem.’ Although Pakistan’s involvement on the other side of the border is rightly questioned, the truth is that you cannot instigate a mass uprising decade after decade merely through monetary or other incentives. Thus India, the emerging superpower, and the largest democracy in the world has managed to gain its place in the world without ‘resolving’ the Kashmir conflict.

The (former) President of the United States (a country that loves meddling in other people’s business) Barack Obama, declared that the Kashmir conflict was of incredible importance before his first election. Obama’s final remark on the Kashmir issue, after two terms of the presidency, was that it was a matter for India and Pakistan.

Why has the international community ignored the fact that India behaves like a rogue-state in one district, and a secular democracy elsewhere. Indian forces have no fear of accountability or prosecution.

The reality is that 2016 was a bloody summer in Kashmir, as was 2010, 2008, and 1999; and there will be many bloodier summers to come. The truth is that last summer was the longest siege in Kashmir’s history. Children have not been able to go to school for three months. Rape? Kidnappings? Why is it considered justified to perforate the eyes of over 500 people – the majority of them young – over the course of three months? The pellets used by the Indian military which blinded so many Kashmiris were designed to hunt animals and blind prey in flight. These ‘non-lethal’ weapons are banned in several countries around the world. Why is it okay to dehumanise Kashmiris and reduce them to the likes of animals? The Indian forces attempt to justify themselves: they were on the streets and protesting against the government! Even so, why should a democratic secular institution justify itself in this manner while oppressing a province comprising of millions of people?

There appears to be a wave of hyper-nationalism the world over, from Trump to Brexit. In India it takes the form of trying to bring the ‘Hindu’ back into ‘Hindustan’. In Pakistan it seems more of a wave of religious signalling in which we are plunging into a bubble of intolerance towards minorities. In India, the likes of Arundhati Roy, who raised her voice against Indian oppression in Kashmir, describing it as “one of the most brutal military occupations in the world” is threatened with legal action for speaking out against her country. She has also voiced her doubts on Pakistan’s involvement in the 2008 Mumbai Attacks (which as you can imagine, didn’t go down too well). Over the years, the Indian government has silenced citizens who challenge state-supported oppression in Kashmir, accusing them of betraying their country. Conversely, soldiers within the Indian army fail to realise they are modern-day Janissaries, being coached into thinking they’re protecting Kashmiris from themselves.

Pakistan maintains that Kashmir is it’s jugular vein. Although there many human rights violations in Indian administered Kashmir, Azad Kashmir reports human rights abuses as well. Pakistan’s love and support for Kashmir is far from unconditional; in fact author Mirza Waheed labels it slightly opportunistic. It’s no doubt a coincidence that the largest nuclear Islamic country in the world only comes forth to support Kashmir when India’s brutality is on the rise. Pakistan ought to not be in this trance where it believes that it can relive its triumph against the Soviet Union by helping (for the lack of a better word) the Kashmiri fight against the Indian Army. Although it is yet to be evidenced, Pakistan’s involvement, whether direct or indirect, has ended up harming the Kashmiri separatist’s movement.

Pakistan and India share a relationship of varying degrees of love and hate. This, naturally is expressed in the situation in Kashmir. Both countries share an erratic narrative of blame over the media which they claim has engulfed the truth. Each blames the other for meddling in Kashmir and Baluchistan respectively, and all the while the voice of Kashmiris remain conveniently silenced.

Simply put: the truth is that the world does not need another Palestine. While Kashmiris are lamenting the lack of sympathy from the world, it is simply not geo-politically important enough for the superpowers to invest time, money, and above all effort upon the region. Pakistan and India need to swallow a vital pill: Kashmiris want independence. Unless India and Pakistan put away their self-centred political agendas, stop the brutality, and listen to the voice of Kashmiris, Kashmir will remain locked away in a tiny drawer in the cabinet of our moral imagination.

Note: Inspired by Mirza Waheed at the Lahore Literature Festival in London

Manahil is exploring the world through her writing. She’s a third-culture kid with a vast expanse of passions that tend to fall somewhere between literature, politics, cricket and healthcare. Currently, Manahil is completely her MSc at Imperial College Business School, and holds a BSc in Biomedical Sciences from King’s College London.