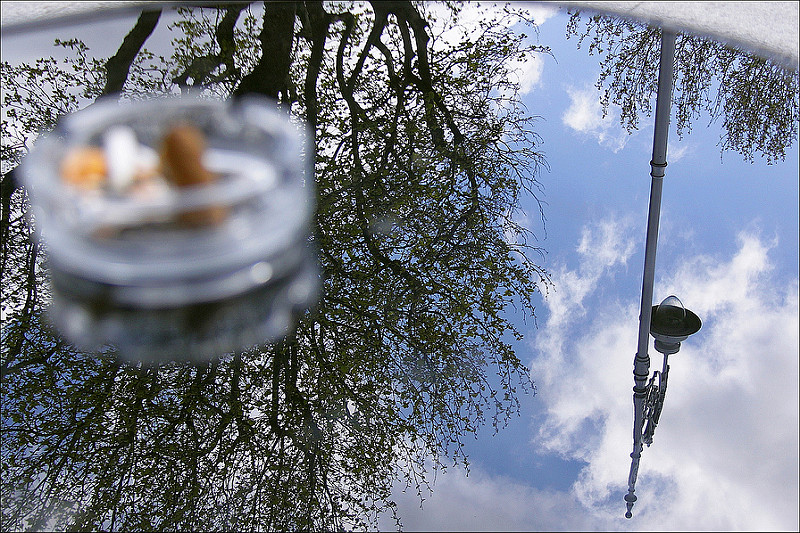 I was so obsessed with smoking that I got this silly shirt custom made to pay homage to cigarettes.

I used to smoke cigarettes. I had my first one at sixteen years of age, in a park with my Yugoslavian friend. Yana had smoked once or twice before. She was beautiful, and has since said she felt terrible for helping me in my mission. Neither of us had valid ID, although Yana was older than me.

We set about trying to cook up a plan on how to procure cigarettes, and when to smoke them: during our break at work. Foolishly, we decided to hit the corner store, and try our luck. We were quickly turned away, which, deep down, made us feel even more foolish. We walked about, back in forth, figuring out what to do next. We decided we would have to get one from a stranger, and naturally we would have to look cool when asking.

Thankfully, by the luck of the draw it was Yana who was chosen to do the asking, though I did bum cigarettes off people plenty of times over my smoking years, and I’m sure plenty of people bummed them off me. In any case, we got the cigarette. Now, the battle at hand was how to light it as neither of us had lighters. Luckily, Yana happened to have matches.

There we sat, in a park coughing and smoking. This, ladies and gentlemen, was my initial brush with rolled up tobacco cancer sticks. I’ve gone to that same park again with my toddler daughter and husband recently, and remembered my youthful foolishness.

I would go on to smoke for the next thirteen years. I also remember my last cigarette. I was with a few friends, in the fall of 2013, at twenty-nine years old. We were outside The Drake Hotel in Toronto and I was going to have a symbolic last cigarette as I had just found out about my pregnancy, but I didn’t do it. In fact, I couldn’t do it. My body wouldn’t comply, I felt nauseous and gagged. That was the last time I tried smoking a cigarette.

I could have been classified as a heavy smoker, even a chain-smoker. I adored smoking. The reasons why I initially started smoking now sound quite foolish. I have never fully admitted this to anyone, but at sixteen it looked cool. All the film stars and rock stars did it. What could possibly be the harm? And who cared if smoking shortened your life? Who wants to live ‘till they are ninety, anyway?

I could blame whoever and whatever for my smoking, but I know I’d be lying to myself. I smoked willingly. In fact, when I first began the habit, I would physically get sick from smoking. But I continued, because in my warped, almost-demented mind, no matter what, I had to smoke.

To this day, I won’t ever know the precise reason why I started, but the point is that I had the willpower to quit. Yes, of course being pregnant was an obvious reason to stop, but after I stopped over the course of the pregnancy, I knew it would be utterly dumb for me to start up again. I didn’t let myself cave again. I had done that once, and it was enough.
I learned many lessons when I gave up smoking. I found out that smoking, besides causing a multitude of illnesses, is not cool, and certainly not glamorous. It is disgusting on many fronts. It smells absolutely horrendous. I can even get awful headaches if I’m near someone who happens to be smoking. It doesn’t matter if someone’s smoked once or many times, they always end up smelling like an ashtray to me.

I also learned that anyone can stop smoking if they put their mind to it. Quitting is certainly not easy, but it’s definitely feasible. It’s all about your will power, and in all honesty it can be achieved instantly if you want it badly enough. You do not need anti-smoking aids. That’s just another ploy to get more of money out of you. Resolutions are also just excuses. You’ve got to just do it.

I usually don’t like to have regrets, but part of me regrets ever picking up that first cigarette and subjecting myself to the smoke and the subsequent waste of my health and money. Such is life. Better late than never.