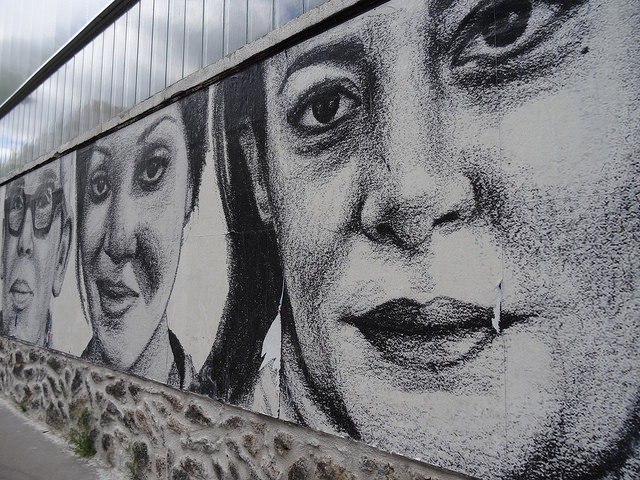 A letter to young feminists

But I do not advise young women or men to die or go to prison in order to be free and change the system of oppression. We can minimize the price of freedom by working and fighting together. Collective efforts through social and political organisations give power to powerless people, who are facing organized military, political and economic powers, at the state level and internationally.

We live in a world governed by power (not justice) under the capitalist, patriarchal, racist, religious system. The most oppressed sectors of society are women and the poor, who have refused to submit to slavery since the beginning of history.

Reading history illuminates and helps us to discover the origin and roots of patriarchy and other types of oppression and aggression. We need to undo what official educational systems did to us and unveil our minds by re-reading the ancient civilisations of Egypt, Iraq, Greece and others, to understand that the oppression of women and slaves is neither natural, divine nor eternal, but political and economic, and that therefore these can be changed through our collective organised efforts, locally and globally.

Revolutions of women and slaves were able to undermine the power of the patriarchal-class-religious system  in every country: West and East, North and South. Every revolution faces a counter-revolution. The struggle goes on. The Egyptian revolution of January 2011 was composed mainly of young men and women. They were able to remove Hosni Mubarak, the head of state. They could not, however, change the capitalist-patriarchal system ruling the country. They did not undermine the power of the Islamic fanatic terrorist groups, and the global colonising powers which were supporting them, openly and secretly.

We need to link the global to the local. I like the new word ‘glocal’ which shows that we live in one world, not three or four, and that the global and the local are inseparable. I was born, and live in Egypt, but I have travelled all over the world during my years of exile to speak at conferences and teach my course, ‘Creativity and Dissidence’ at universities. I made the link between creativity and dissidence. You cannot be obedient and creative. I changed the concept of exile from a punishment to a reward. I gained knowledge from living in different countries and different cultures. We can overcome any hard or painful situation by making it fruitful and pleasurable, by changing the negative experience into a positive one.

I was able to survive prison. Every day, the jailer would inspect my cell and shout ‘If I find paper and a pen in your cell, it will be more dangerous than if I find a gun.’ I was able to smuggle a small eyebrow pencil and some toilet paper into my cell. I was able to hide them underground in a tin can. Every night, I brought them into my cell and wrote. In three months of being in jail I finished my book entitled Memoirs From The Women’s Prison which I published after I was released. I felt as if the walls of prison vanished through the challenge and power of creative writing. If I have to give advice to younger generations I can tell them this: if you can transform a negative experience into a positive one, you can survive any torture or oppression.

I am living surrounded – physically and intellectually – by young women and men who read my books or attend my lectures inside and outside Egypt. They write emails to me, or phone me, or visit me at home. With their support I gather the energy to continue fighting and writing, and, above all, to continue to be happy, active, optimistic and productive. Hope is power and I never lose hope. Even in prison I was full of hope, and sure that I would come out alive, healthy and even more creative, and that Anwar Sadat, the president of Egypt who had put me in jail, would soon fall. My prison-mates did not believe it. He was powerful, wealthy and healthy. But he was shot dead just one month after putting us in jail.

I feel young amongst young people, although I am now seventy-eight years old. You can change the concept of age, and of time and place, of loneliness and divorce, of disease or even death.

3. Lose the fear of hellfire

We have illusions and fear inherited from early childhood. I lost the fear of hellfire because my father and mother told me there was no hellfire. Many children lose their common sense because of the fear of hellfire. Most children are born intelligent and creative. They look up to the stars and ask who created them. Parents reply, ‘God created the stars’. The child then asks automatically, ‘And who created God?’ But nobody answers this question. Another child asks, ‘Who created the sky and the earth?’ The teacher replies, ‘God created the whole universe.’ The child then asks automatically, ‘And what did God do before creating the universe?’ Now the teacher gets angry and says, ‘He was preparing hellfire to burn whoever asks that question’. Many children stop asking questions after that.

My daughter and son asked questions from a very young age. I never stopped them. Some schoolteachers discouraged them with threats of hellfire, but I talked to the teachers and they stopped threatening my children. We should not leave the brains of our children to be crippled by fear. My daughter, Mona Helmy, gained a PhD in political economy but she resigned from her post to become an independent writer and poet. She published many books and led a youth campaign to give due respect to mothers in family naming traditions. Her campaigning helped to change the law. My son, Atef Hetata, graduated with honours from the college of Engineering but left this career to become a film director. He wrote and directed the feature film The Closed Doors which has won many prizes nationally and internationally. Both my son and daughter have paid a high price for their creativity and dissidence – but they continue to struggle, and they never give up.

This is my advice to younger generations, men and women all over the world. Many young feminists were disappointed after Donald Trump came to power in the USA, and after many other fiercely capitalist, patriarchal and racist figures like him took power in Europe and other places. We hear about terrorist attacks everywhere. In Egypt, some of the young feminists who participated in the January 2011 revolution in Tahrir Square are disappointed and have lost hope. They think the revolution has failed because of the backlash against women and progressive and feminist ideas and activities. But if we read the history of revolutions in France, Britain, Russia, America and other countries, we learn that the dreams of any revolution may take many years (or even centuries) to come true. In spite of the increasing counter-revolutions everywhere, and the growth of Salafi and Islamist groups, the daily attacks of Daesh and the Muslim Brotherhood in Egypt, people never give up. Those who fight for justice and freedom will succeed in the end.

We need to change the conception of success. It is not money, nor fame, nor power: it is the ability to make the world a better place to live in. It is the ability to fail, to fall to the ground, but to stand up again and again, and continue the struggle. Failure is not a negative experience; it can be positive, if we can learn that failure is the first step to success.