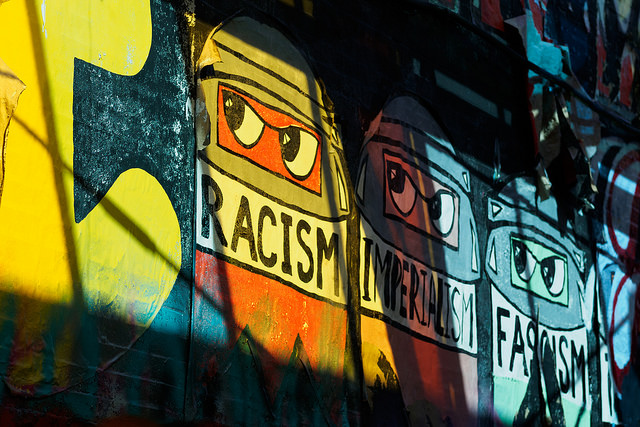 Why is xenophobia on the rise?

Xenophobia is part of the global-local (glocal) political economic social system ruling the world. It is deeply rooted in human culture and religions, ever since the old slave-patriarchal system started. If we study history, religion and politics without separating these areas, we will discover that xenophobia is not a new phenomenon, nor is racism, nor is sexism, nor is the oppression of women. They are all connected to the slave system, the ‘class-patriarchal-religious system’. Class, Race, Gender, Religion. These four are inseparable.

Xenophobia is the product of this global historical system. Racism tries to rationalise things like homophobia, or the fear of those who are not like us, who are different, with a different colour or language, or who believe in a different god or who follow a different prophet, just because they have different values or a different way of life. There is a backlash against the poor, the weak, women and children. You cannot oppress and exploit people without the mask of religion. You need God to justify injustices. Hence we see the rise of religious fundamentalist movements alongside xenophobia, racism and the increasing oppression of women and the poor. They all work together. People continue to fight against this backlash. Massive grassroots movements continue to rise. Some governments, in the West and East, are trying to fight against rising xenophobia. Expressions of xenophobia and racism are currently not legally permitted in most countries in the world, and are not tolerated by many people, but the world is regressing towards more military aggression, more imperialism, capitalism and colonialism. The super-powered USA government under Trump is imposing more and harsher measures against foreigners and immigrants. The blatant xenophobia and racism are no longer a question for debate.

Imperialism, capitalism, colonialism, patriarchy and religion all embrace racism, xenophobia and misogyny. Anti-immigrant fervour reaches around the globe including rising anti-immigrant sentiments in Europe. We need to remember the horrible crimes committed by European and American imperialist powers everywhere over the 20th and 21st centuries.

Racists insist that sexism and anti-woman traditions are specific to Arab and Muslim societies. You cannot be used by racists to confirm their prejudices against Arab and Muslim men if you consistently criticize all patriarchal capitalist colonial religious anti-women values, not only those found in Islamic and Arab cultures. Often, Islam is taught separately form the other Abrahamic religions. I sat on a panel with a professor from the University of Bern, Switzerland, during the early 1980s. He described himself as an Islamic scholar. He solely studied Islam, as most Islamic scholars tend to do. He had never compared Islam with other religions. He thought that the veil, for example, was purely Islamic and did not exist in Judaism or Christianity. His face became red when I proved to him that the tradition of veiling was inherited by the Muslims from previous monotheistic religions. At a woman’s conference in Montreal during the nineties, a group of Jewish women were angered when I proved that historically, the veil started in Judaism and was inherited by Christians and Muslims.

Xenophobia and racism can result from lack of accurate knowledge. They are not merely the result of hatred of the other, or the fear of the unknown. Islamophobia is facilitated by the violent stereotypes portrayed in Western media while increasing use of political and social platforms have resulted in increasing discrimination against Muslims.

Media and political power depends on a fear of Muslims. Some laws have been issued to target Muslims. Religious and cultural values continue to oppress Muslims. Media propaganda shows Muslim men as violent and bloodthirsty. This is not new, and has been part of colonial education since slavery and through the colonial period. Many Arab and Muslim governments collaborated with the colonizers, openly or secretly. Billions of petro-dollars from rich oil countries in the Gulf region were sucked into Western economies, and support a media which depicts Arab and Muslim men as barbaric, sexist and primitive. Islam is portrayed as the only religion that oppresses women. Arab nationality became stigmatised. Arab unity became seen as an aggression and a threat to Israeli and Western security.

However, many people in the world are fighting against all the types of injustices which are enacted in the name of God, Nation, Class, Gender, Race and the many other axes of oppression.