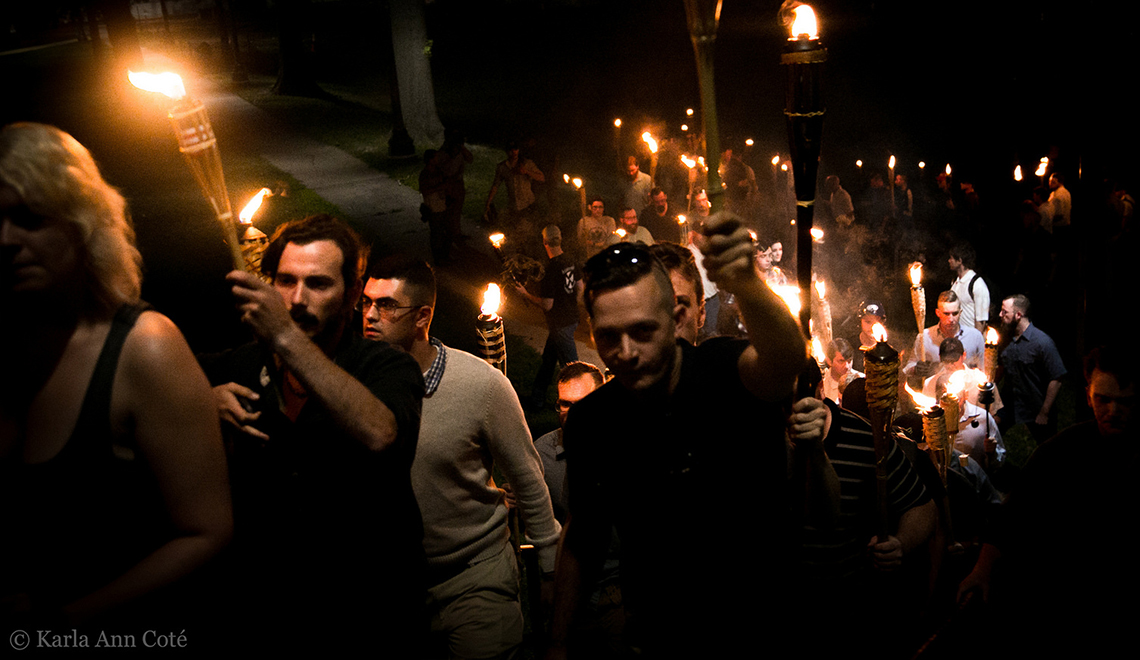 How to force quit a predatory ideology

Waking up to images of people with torches gathered in Charlottesville, chanting and ranting nonsense, maliciously organized with the intent to offend, upset and disgrace an entire nation was disgusting. Yet another circus act for the rest of the world to enjoy. But it is necessary to shake off that ‘I cant believe this is happening in 2017’ feeling in order to take an analytical approach and ask why these types of rallies are reoccurring, and getting bigger, as of late. A quick bio check on Trump’s advisors will yield an unsurprisingly ultra-conservative lot; let’s keep the magnifying glass over Bannon’s very significant influential role in the administration.

Even though Trump has shown his streak of racism one too many times both pre- and post-election, we were somehow expecting a humane gesture from a man incapable of delivering one. Reporters pressed him to denounce the white supremacists’ rally. American citizens hoped for a concise statement from their president to condemn the gathering, begging for a even couple of hundred characters expressing disgust at this horrendous assemblage. Instead, we received a brief, vague attempt at a message about unity. There is a disconnect in the fact that Trump has never shown us how he intends to uphold unity across ‘colour, creed, religion, or political party.’ His legislation – such as the infamous Muslim Ban – suggests otherwise and as for his public statements, well…need I say more.

The core issue does not begin and end in a rally in Virginia. White supremacy can be found tattooed outside and in, of many who walk the multicultural streets of this country. The issue manifests as a movement, expanded into the ‘Alternative Right’ ideology, and has infiltrated the executive mansion. It is mental suicide to believe that this movement has no formal structure or organisation. The disgrace of Charlottesville is just one example of an intricate weaving together of people, ideas, action, and implementation. Their efforts to bully and instill fear are longstanding, but the leniency in preventing the disease from spreading is dangerous. What has decisively being allowed to take place in recent times is alarming.

Civil strife should be dismantled right here, right now. Rallies encouraging terrorism and ill-will like these should be stopped early on. Trump’s feeble attempt at condemning the entire mess is a mockery to human intelligence and furthers the cause of hateful individuals who wave the American flag as a symbol of racial superiority. White supremacist identity politics have no room in the character of the nation; they will only contribute more violence, more deaths, and more outward displays of bigotry. It’s appalling to hear about, read, and watch. Its especially appalling when your friend tells you about how her (brown) daughter wasn’t invited to her (non-brown) best friends birthday party because her parents voted for Trump. Or how another friends’ daughter cries behind closed doors due to the bullying and racist comments she faces weekly. Or how to explain my disgust over people with torches to my six year old as he sees me frown and shake my head. There is no room for this in the home, in our lives, our cities or our country. We will not remain silent. We will not tolerate this.