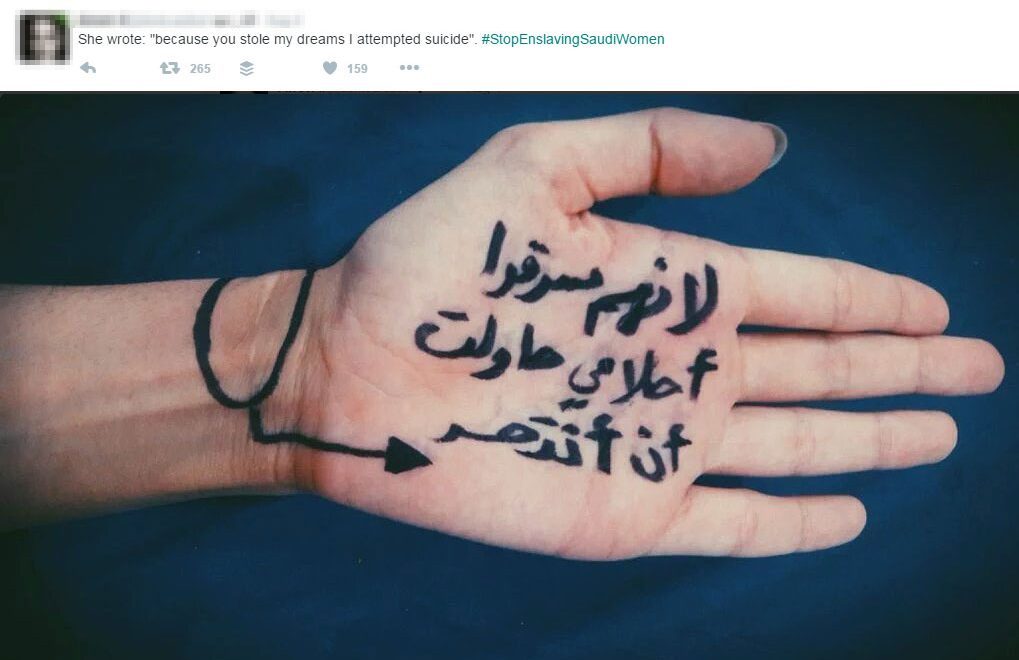 sister-hood has been given exclusive access to the first English language video created by women inside Saudi for their ‪#‎StopEnslavingSaudiWomen‬ campaign. Join us in supporting these brave women– help us spread their message.

Imagine that you have no control over your own life. Every decision is either already made for you, or has to be approved by someone for you. Feeling that even though you are a responsible adult you still have to be treated like a minor. Everyone tells you that it’s best for you, that they are protecting you. You may want to study a subject that you have dreamed of, and you may have worked hard to get the necessary grades, but then you discover the decision has already been made for you. That subject will ‘corrupt’ you, and ‘it’s not for you.’ You love someone, and you have been planning to marry them, but you can’t because a decision was already made for you and you have to marry someone else that you have never met. You found a job you like, but you don’t get approval, and it’s ‘not an appropriate place for you to work.’ Every single decision in your life is dictated by someone else.

Many Saudi women suffer in this way because of male guardianship laws. Adult women must obtain permission from their male guardian to travel abroad, marry, or be released from prison. They may be required to provide their guardian’s consent to work or get health care. Their permission to allow their dependant to do these things is mandatory.  The overall effect is to hand the fate of women to their male guardians completely. This law allows men to treat women like property. I should note that not all women suffer from this law, because some guardians decide to give their dependants their freedom, or at least place fewer restrictions on them. Unfortunately not all women are as lucky and suffer a great deal. Some live through unimaginable hell. 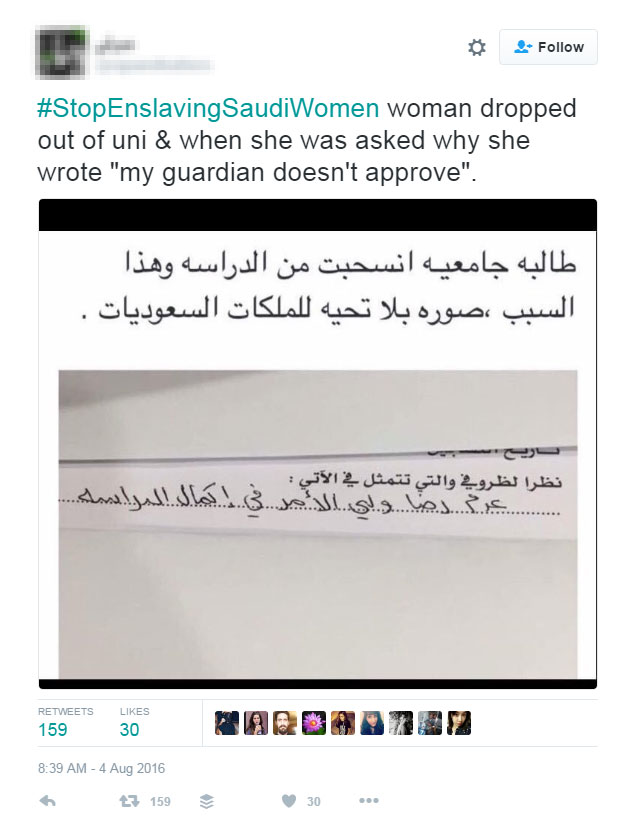 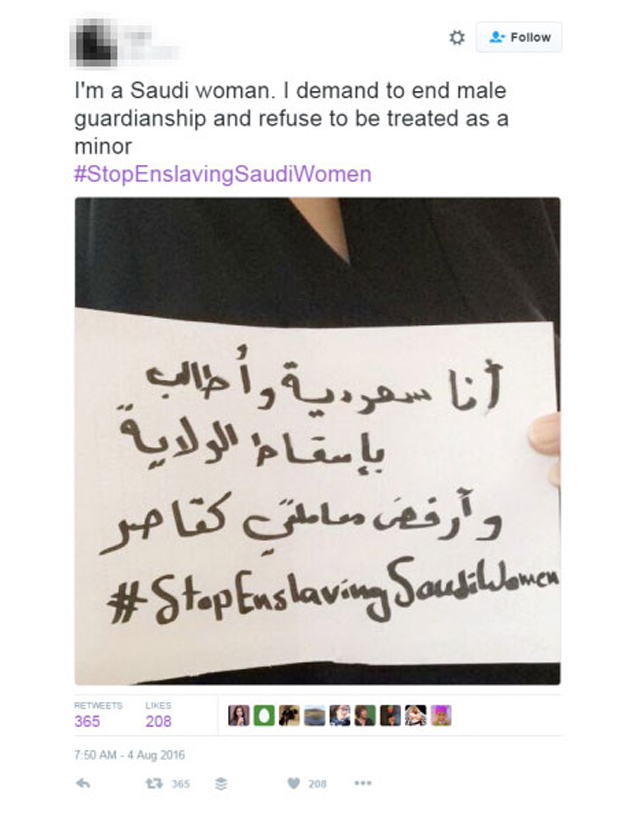 Even though women suffer because of this law, a lot of Saudis (mostly men) support it and think these horrendous abuses committed by some guardians are no excuse to end the guardianship law on the basis that there are also guardians who are good to their dependants. They claim that this law is important, that it is best for us, and that it protects us. But to me, it’s like trying me to a wheelchair even though I can walk, because they think I’m too weak to walk and it’s best for me to sit and wait for them to push me around. It’s absolutely degrading, even if the person pushing me around is a good person that takes me to where I want and even unties me from the wheelchair and lets me walk a few steps every now and then. 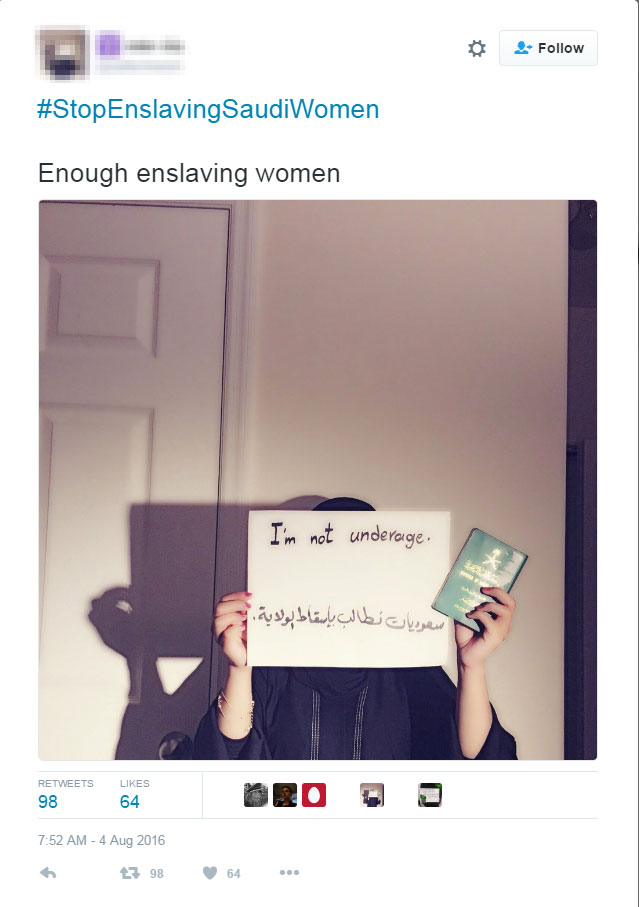 When this law ties women to these wheelchairs, it makes it easier for men to abuse women. Abuse is common here. It could be something like a forty year old woman who not able to travel because her son (her guardian) refuses to give her his permission, or a woman not being stuck in prison because her father (her guardian) thinks she brought shame to family through getting arrested in the first place. So she stays in a ‘care facility’, which is basically another prison for the rest of her life, and the only escape from that place is suicide. Many of these women and girls commit suicide due to the injustice of getting a life sentence for a minor offense, and because they have lost hope.

There are also indirect abuses. The law makes it easier for men to physically abuse or even rape their dependants. Courts are very biased, and don’t tend to support victimised women. Which means, even if reported, chances are their abusers will still be their guardians. So women avoid reporting their abusers, and stay silent because it would only make their abusers angrier, and the abuse might even turn into murder. 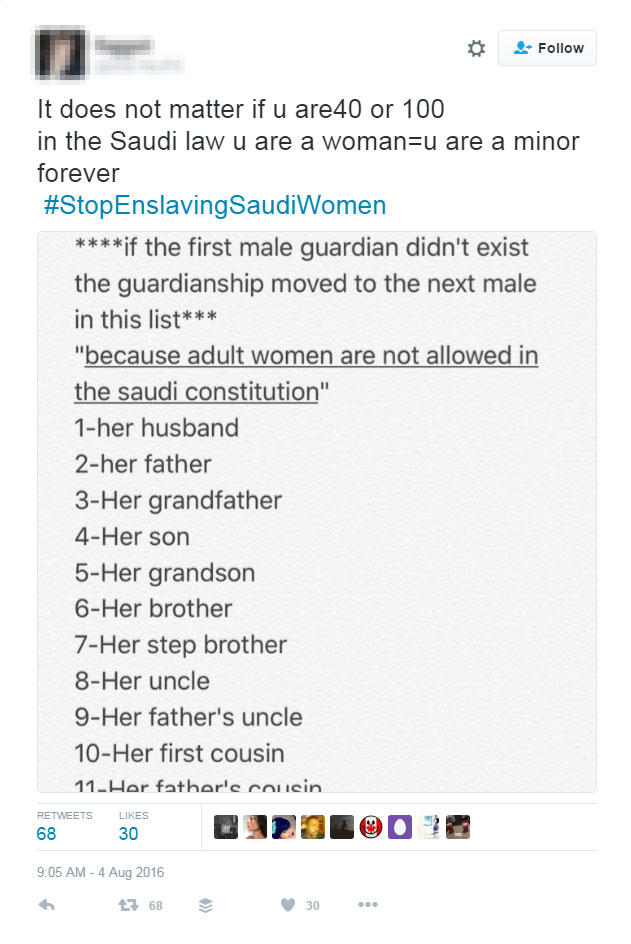 Many Saudis have no empathy for women, or they’re simply ignorant of how bad this law is, and how it violates basic human rights. They undermine women’s struggles in order to protect our county’s ‘honour’ (like we have a good reputation in the first place!). The government just wants to make themselves look good. They make minor changes in laws that have very little to no impact on our lives, then make a huge deal out of it in the media to make it appear that they are starting to give us our rights. Yes, things are improving, but at such a slow pace that hardly counts. They should be working on giving us our rights faster, or it will look more like deception and false hope than a sincere effort. I want there to be international pressure upon our government to get them to give us our basic human rights.  People should not be okay that their governments are silent when it comes to human rights violations in Saudi Arabia. Everyone should speak up and fight the guardianship law and other human rights violations. Especially Saudi women. We need to talk about this issue every chance we get.

Luckily many Saudi women do realize that we need to speak up. A group of us have organised a campaign to end the guardianship law. It is called  #StopEnslavingSaudiWomen, and it’s mostly on Twitter. There’s also a hashtag in Arabic  #سعوديات_نطالب_باسقاط_الولايه which means ‘We’re Saudi women and we demand the end of guardianship law.’ Their efforts and courage are amazing. They get called ‘whores’, and ‘traitors’, for simply demanding their basic human rights. They are also asked to leave the country if they don’t like it here, which is ironic because they would need their guardian’s permission for that. They also get accused of being foreign agents posing as Saudi women to ruin ’Saudi values.’ How silly is that? That’s why if you look through the hashtag you’ll see many of them posing with their passports to prove they are Saudi women.

I’m very proud of them, and I hope more Saudis speak up like they do. 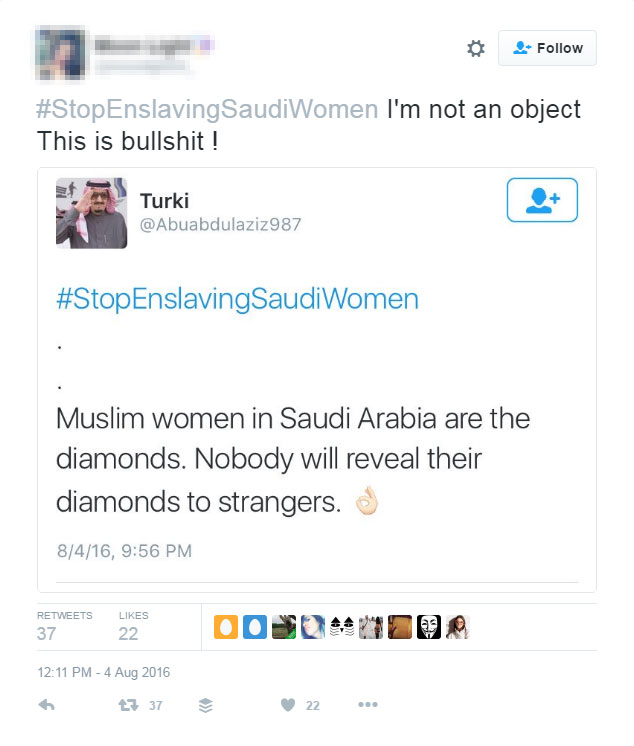 Noura Faisal is a 22 year old student from Riyadh Saudi Arabia. She's interested in women’s rights and wants women all over the world to have their basic human rights.