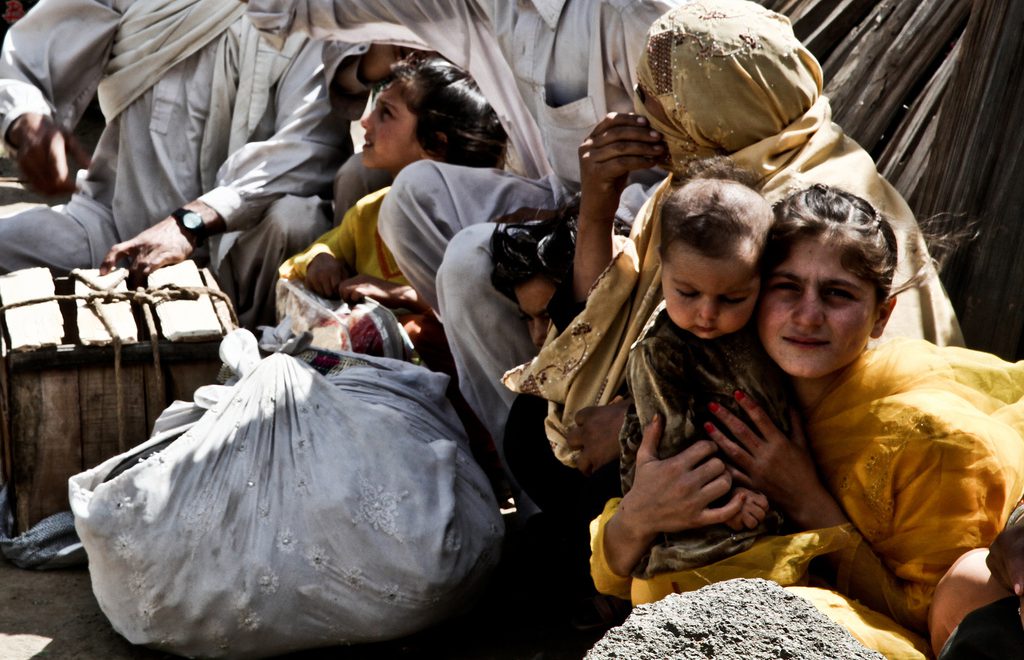 Women and children are severely affected by instability and war, being physically and mentally vulnerable to the brutalities of wars and hardship of displacement. Millions of Internally Displaced Persons (IDPs), mostly from the tribal belt of North Waziristan, are living in the Bannu Camp in Pakistan. This is a humanitarian crisis, which is largely ignored by the mainstream media. The extensive migration of these IDPs is due to Operation Zarb e Azb, a military operation against militant groups in North Waziristan. The operation started some three years back, and due to the intensity and sensitivity of the conflict, locals were forced to evacuate their homes on a very short notice. Many women, children and elderly people migrated to Bannu, where a camp was created as a temporary shelter. Initially they hoped that they that they would soon return back to their homes, but sadly the misery of these IDPs continues.

The operation has been prolonged. With each passing day the misery of IDPs increases. The tents are only cloth. Just imagine how hard it is for children and women to deal with the harsh weather under these circumstances: chilling winter nights and a hot summer afternoon in tents made of cloth. It’s really sad to see women and kids traumatized by the harsh conditions and poor facilities in Bannu IDP camp. Children and women at these camps are developing many diseases like cholera, typhoid and anaemia due to poor hygiene and health conditions. Young children are exposed to the danger of catching deadly viral and bacterial infections. Exposure to the elements means that seasonal diseases have very negative impacts on displaced children.

In Pukhtoon society, women, especially those from the tribal belt, are often limited to their homes. The bleak conditions and abnormal circumstances in the camp are shaking their physical and psychological health. Many women are in deep depression, and suffering from many physical and psychological diseases along with the uncertainty of life as a displaced person. Children in the camps have no form of education. None of these IDPs have any choice right now rather than to remain because the military operation is still ongoing. Constant military actions have destroyed the whole infrastructure of the FATA region.

Right now the IDPs are living in a miserable state, returning may be worse. The state’s attitude to their present conditions and their future relocation is very casual. This lack of serious focus and planning has left the IDPs in a situation of frustration. How long can these women and children live in such a situation? A more collaborative approach between society and government could make a little difference to the lives of these suffering IDPs. The media has largely ignored the suffering in the camps. Those living in the camps have sacrificed a lot for the sake of peace as part of the global war against terrorism. They deserve national but international recognition and aid.

We must think about the situations in which young people are growing up. How will this hardship impact upon their young minds? Any further neglect of these IDPs will be a huge injustice. The government can at least focus on their major problems: health, education and shelter. Everyone should take a minute and think: winter is right around the corner and after spending blazing hot afternoons in tents, IDPs now await bone-chilling nights. Children, women and the elderly will once again suffer. Ending the misery of these people will involve the collective efforts of the national and international community.

Let’s raise our voices and highlight the problems of these IDPs before it’s too late. Women and children are living through an appalling humanitarian crisis: no schools, no homes, no hospitals. They are underneath open skies with nothing more than just a piece of cloth as their shelter. We need to focus on the misery of the forgotten IDPs in FATA before it’s too late.