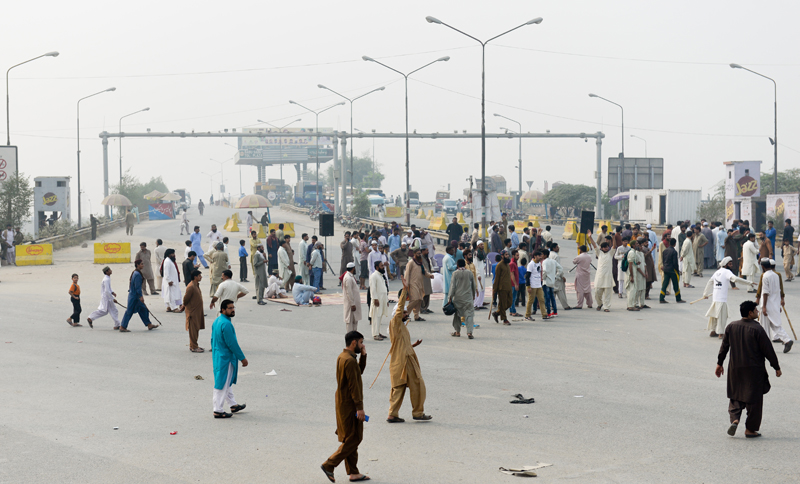 There was largely a sense of relief when news of Asia Bibi’s acquittal disseminated across the world. Some rejoiced; others wondered if the Naya (new) Pakistan Imran Khan had promised was finally coming to fruition. However, a few were reluctant in celebrating this monumental victory against Pakistan’s draconian blasphemy laws. It seemed too good to be true.

For those who haven’t been following the trail of blood left by these laws, let me summarise it for you briefly: religion-related offences were codified by the British Raj in 1860. At that time Pakistan didn’t exist, so it inherited this legislation upon gaining independence from India in 1947. The laws have been modified over the years. For example, in 1982, a clause ordered life imprisonment for ‘wilful’ desecration of the Quran. In 1986 a separate clause was inserted to punish blasphemy against the Prophet Muhammad. The penalty recommended ‘death or imprisonment for life’.

Since the 1990s, at least 65 people accused of blasphemy have been murdered. It was the murder of Salman Taseer in 2011 that drew my attention to the treatment of minorities and the oppressive nature of these laws. Taseer was a revolutionary politician who served as the Governor of Punjab. During his career, he became an outspoken critic of the blasphemy laws and called for the pardon of Asia Bibi. For this he was murdered by Mumtaz Qadri, his bodyguard, who vehemently disagreed with him.

Qadri was hailed as a hero. He was showered with rose petals. Over 500 clerics pledged support to him, and urged others to boycott Taseer’s funeral. Even after his execution, Qadri’s poisonous message lives on. In March 2016, Tanveer Ahmed from Bradford travelled to Glasgow and murdered shop keeper Asad Shah. His motivation was fuelled by hatred towards Shah’s Ahmedi faith. It later transpired that Tanveer had also been influenced by the actions of Qadri.

The murder of Salman Taseer was described by The Guardian as ‘one of the most traumatic events in recent Pakistani history.’ It was an event that drew significant attention to the country. Back in 2011 I wrote a blog titled ‘Deluded Defenders of God’. I was horrified by what I was seeing on the news and hearing from family and friends in the country. I couldn’t believe the murder of an individual was being celebrated.

My disbelief stemmed from my faith: the very faith these men were using to justify the killing of an innocent man. As Muslims we are taught that if you take the life of one person it is akin to taking the lives of all humanity. Such is the value of the sanctity of life. Then last year we heard of the murder of Mashal Khan, a student accused of blasphemy. In reality he was like any normal uni student, using his new-found knowledge to think critically in a society which suffocates those that dare to do so. He was using social media to share his humanist views, connect with like-minded individuals, and find his place in the world.

He soon found himself at the centre of a deadly attack; stripped, beaten and executed. His lifeless body thrown from the second floor and beaten with wooden planks. A hundred people gathered to watch this brutal theatre of death and depravity. Over 20 policemen were present, but they only intervened when the mob was about to set fire to Mashal’s dead body. Arrests were made, where it emerged that some of the officials at the university where Mashal had studied had also taken part in the gruesome murder.

So here we are again: November 2018, Asia Bibi, a mother of five and a Christian, has spent eight years on death row after she drank from the same cup as a Muslim. She was falsely accused of insulting the Prophet Muhammad. Note the word false. Rumours have spread of her alleged crimes.

On 31st October she was acquitted, but for Asia Bibi, freedom is still beyond reach. Following her acquittal, hysteria erupted across the country. Protests were called for Bibi to be put to death. On Friday night, in order to pacify their opponents, PTI, Pakistan’s ruling party, signed an agreement with the anti-blasphemy faction, giving in to most of their demands. Worryingly, Bibi will be placed on the exit control list, which will prevent her from leaving the country. It is certain that if she does not leave the country then her life is at stake. And so, a woman who was on death row for eight years, protected only by the four walls in which she was imprisoned, continues to fear for her life, this time without much protection.

Yesterday, I struggled to keep up with the news from Pakistan: news of buildings burnt, stalls looted and crowds proclaiming they would die to protect the honour of the prophet. News that Bibi’s lawyer, Saif ul Mulook, has fled the country in fear for his life. News that a woman falsely accused of insulting the prophet and imprisoned for eight years for drinking out of the same vessel as a Muslim still remains in a prison cell. And as the tweets were flocking in, I found myself thinking: I cannot relate to this hysteria; I do not ascribe to this interpretation of Islam and I find it an alien, insulting, distorted representation of a faith that, for me and so many others, is rooted in compassion and empathy.

I am a second generation British Pakistani. I was brought up with teachings that God mentions His compassion and mercy more than His wrath. I grew up with stories of the Prophet (peace and blessings be upon him), stories of him suffering persecution, fleeing from one town to the next, being pelted with stones, but instead of punishing the people responsible, he prayed for God to have mercy on them. I was taught that actions speak louder than words, and that the way you behave, speak and conduct yourself is the most important attribute of a Muslim. I was taught that if you are a person of faith, it should manifest itself in the love and compassion you have for others. I was taught that it is incumbent upon us to look after weak, disadvantaged and minority communities.

So, to the clerics and mobs on the streets of Pakistan, I ask, whose religion are you defending? Whose honour are you protecting? Ask yourselves, is this what your religion wants from you? Will the death of a mother truly satisfy your lust for blood? If so, it won’t be long before there are rivers of blood flowing through Pakistan.

Let me remind you of the principles upon which Pakistan was founded;

‘I assure you Pakistan means to stand by its oft repeated promises of according equal rights to all its nationals irrespective of their caste or creed….In any case Pakistan is not going to be a theocratic state, to be ruled by priests with a divine mission. We have many non-Muslims, Hindus, Christians and Parsis – but they are all Pakistanis. They will enjoy the same rights and privileges as any other citizen.’ – Muhammad Ali Jinnah