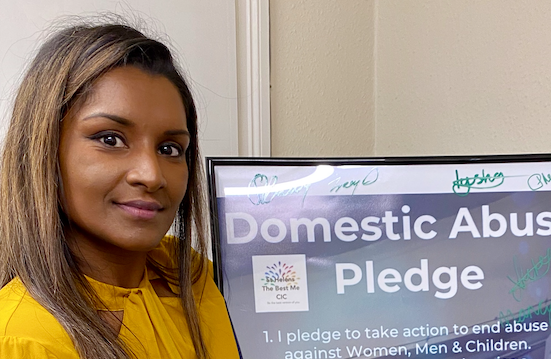 Becoming my own hero

You’ve been nominated for an Emma Humphreys Memorial Prize. What does that mean to you?

As a BAME woman with a learning disability, I feel overwhelmingly proud that the hard work and late nights I’ve put in have been recognised. Those around me know the sacrifices I have made to ensure that tomorrow is a better day for other women who are suffering in silence.

What drew you into working against male violence? Why is this important to you?

I have suffered most of my life: trapped in the cycle of abuse, and walking around dealing with unresolved trauma. Since my transformation after fleeing so-called honour-based abuse in 2018, I have vowed to help others. I feel it is my duty: the feeling of liberation is so powerful that it should be felt by everyone trapped in the cycle of abuse and violence. Education was a key player in my transformation. Education is essential for change. The fact that we are all connected is so important to acknowledge. My fight against male violence and preventing domestic abuse by creating a common sense trauma-informed approach has helped break down the stigma, increase our community consciousness and involve everyone in doing their part to end violence against women and girls. There is another way, and I am a living, breathing example of this.

It’s been a very challenging time for people working in the domestic violence sector, from the crippling cuts under austerity to the increases of violence during lock-down. How have you dealt with these challenges?

Many have suffered and still are suffering due to COVID-19. Victims are the managers of their lives, and they understand their perpetrator’s behaviour patterns. As a former victim I can relate. Stress and community trauma are likely to last long after COVID-19 has passed. It’s tragic to note that most domestic violence homicides during lock-down were committed against women.

I have continued to work during lockdown. I have been working with several organisations, either delivering medicine, food packages or as part of a team on call, helping those who were suffering. Through St Helens The Best Me CIC we created online groups and art classes so that children could stay connected. Empowering Women Group coaching classes were set up so women could log on to learn techniques and develop tools to better their lives. Abusers mostly act when there is no one watching. So increasing contact with vulnerable people is something we do regularly.

You run empowerment groups for the survivors of domestic abuse. What impacts do these have for those taking part?

The Empowering Women Group classes have been held regularly thanks to funding we received from Merseyside Community Fund. We are all volunteers. I made sure that I did everything I could, and that not one moment was lost to help empower any sister who needed it. We have had some women log on from as far away as the Netherlands. We now have a new Soul Coach on board – Shazney – who is delivering the sessions up to December. Our mission to empower women still continues.

You’re a school governor as well as an anti-violence advocate. What role do you think education can play in reducing interpersonal violence?

As a child who was raised in an environment of domestic abuse and violence, I can say that violence was all we knew, and tolerating violence was the norm.

I am a very different sort of Governor. I speak my mind, and I am very passionate about educating young people. I am a perfect example of someone who lived with normalised sibling-on-sibling violence, and who has experienced gang culture. What was missing in my life was education delivered in a way that I could understand and engage with. I run empowering sessions for young people via my local community centre. I teach young people about emotional regulation, and how bad attitudes and incorrect beliefs can easily turn to normalising violence. I teach young people the power of ‘pause’, and how to make better choices.

What needs to be done at a wider political level?

The answer to ending violence against women and girls ultimately lies at a political level, but that doesn’t mean we can’t make a difference at a grass roots level. This is what I have been doing. It seems that when it comes to politics, there’s a ten year cycle of repeat and carry on. The current system isn’t working, and it isn’t working because it wasn’t built to. If the existing system were working, we wouldn’t see so many violent crimes. We need a total system change which includes a separate perpetrator strategy with a separate funding stream. We can change our cultures and our society, but to do that we need a government that is serious about ending violence against women and girls. The current system of Blame Shame and Pain isn’t working. We need to raise the consciousness of our country and have a more trauma-informed approach to dealing with violence.

Working in domestic violence can be emotionally draining. How do you protect your mental health?

Domestic abuse is something I have lived with for most of my life, so the level of resilience I have in this sector is above average. Working with victims and perpetrators isn’t difficult for me. I have a high level of emotional intelligence and I am very good at building rapport. People can feel that I am truly, authentically rooting for their success. Any issues I have are probably with key individuals who could help with system change but refuse to because they don’t like change, or because change is hard work, or because change is risky. That is what upsets me. The people in the system who don’t support positive change.

Who inspires you to carry on with the work that you do?

My accountability circle keeps me going; my daughter who is my guardian angel, especially after I fled home in 2002 due to an attempted ‘honour’ killing. She wasn’t even born then – she was just growing inside me, at a time when I was very lost and confused. My two boys who entered the world under horrific conditions, yet are my kings and have turned into such empathic, kind, loving humans, my hero who I will not name, and all the women who have transformed their lives because of the work I do in the community. When I hear them say ‘Shana you have changed my life’ that keeps me going. My motto is ‘Become Your Own Hero.’ Every time I share my story, I give hope to the hopeless, I give strength to those who are weak. I love those who have never loved themselves and I believe in those who have lost their belief in themselves.