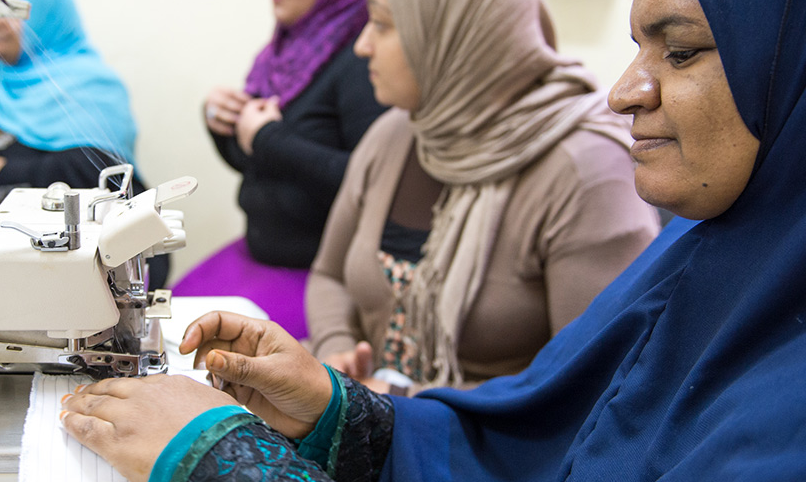 Laila* has not had an easy life. Her mother died when she was eight years old. Soon afterward her father sent her to work in the home of a village leader, where she worked as a domestic servant until age 16. That’s when her father arranged for her to marry a much older man who already had other wives. She soon became pregnant and eventually had three children. Then her husband died unexpectedly, and his other wives denied Laila and her children any inheritance. They forced her and her children to leave.

With nowhere else to go, she moved to Cairo where she had a sister. Soon after, she remarried, and had two more children with her second husband. Now aged 35, the many years of hard labor have taken their toll on Laila’s health; she has a difficult time standing for long periods. But she needs to work in order to support her family and continue to send her five children to school.

Through word of mouth, Laila heard about Al-Shehab Institution for Promotion and Comprehensive Development. “People will tell if a woman knows of another woman facing difficulties or issues, she will say ‘Why don’t you go to this place? They will be able to help you.’”

Al-Shehab promotes the rights of marginalized groups, in particular women and children, living in the informal settlement of Ezbet El Haggana in Cairo. The center offers legal support, counseling, and runs several vocational training programs and income generating activities in an effort to combat the extreme poverty that touches many of the women and children it serves.

Laila first worked with Al-Shehab to get documentation for herself and her children. Soon after arriving in Cairo, she lost touch with her sister and had no support system. She didn’t know how to get official birth certificates for her children—but Al-Shehab helped. “They have been able to produce ID cards for me, in addition to birth certificates for me and my kids. Most women here, they don’t know what to do and how to go about getting this. Even if they try to figure it out, it would take them forever. But with this [Al-Shehab] here they are, within two days almost, got my son his birth certificate.”

Since then, Laila has also signed up for vocational training with Al-Shehab to learn to sew—a job where she can sit, instead of stand. Laila says the difference Al-Shehab has made in her self-confidence is immeasurable. “There’s no words to describe the difference in the feeling. Now here, I feel that I am an employee of a place. If I was to work for government office, I would not be treated this well,” she explains. “It’s different than other places where you’re told, ‘Do this, do this, do this.’ Here, we are being treated very fairly. So I feel completely different. I am doing a job I am not embarrassed to say I’m doing.”

For Al-Shehab, that self-confidence and empowerment is the key. “The community here is predominantly women-led households—about 60 percent,” says Reda Shukry, founder and Executive Director of Al-Shehab. “The women work mostly as domestic workers and have small stores, and the children work in the factories. What we want to focus on is empowering these women, including how to handle and end violence, increasing legal awareness, reducing discrimination within the work force. In general, simply to empower a woman to enforce her role and her place in society.”

Knowing that many of the women they serve work as domestic workers, the organization recently undertook a major initiative to improve working conditions for these women. They conducted a study to understand what issues domestic workers face, and found that many were victims of sexual assault or were unjustly accused of stealing and had their compensation withheld. Beyond that, they are often treated inhumanely. “When they are in the homes, they are not allowed to eat with anybody there, they are not allowed to drink from the same source, and so on,” says Shukry.

Shukry, who has been an activist since she was 17 years old, says she wants women and girls to know their rights and actively participate in political and economic processes. “We don’t like the victimized image of a woman, or making her feel like she’s weak. We prefer promoting a positive example and positive image—an empowering image,” says Shukry. “The more a women is seen as a victim, the more likely she is to be marginalized.”