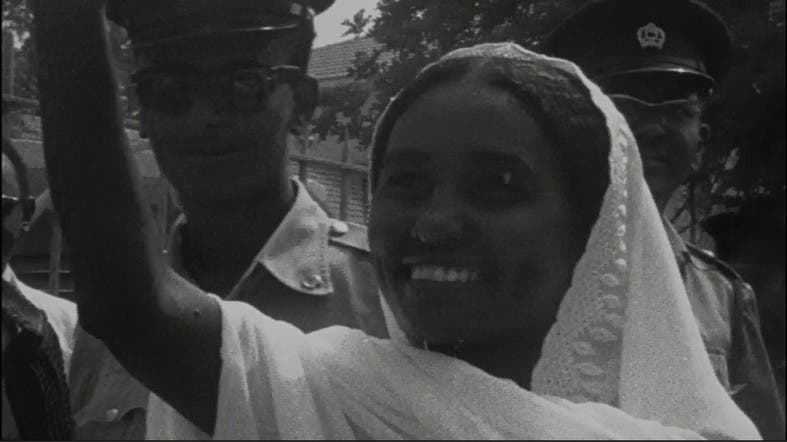 In parliament, we demanded complete equality for working women. In 1969 women received the same rights when it came to earnings, pension and working conditions. In addition, we also demanded that women be appointed judges of the Islamic faith. And we achieved that! Sudan was the only Islamic country that had female judges for Islamic law. Women became diplomats, joined the army, became policemen. – Fatima Ahmed Ibrahim

Sudanese feminist politician Fatima Ahmed Ibrahim was the first woman to be elected to a parliament in the Arab world. She was born in Khartoum to an educated family. Her grandfather was headmaster at a local school as well as the Imam of the mosque. Her father was also an educationalist and her mother one of the first generation of Sudanese women to attend college.

During her own education at the Omdurman Girls’ Secondary School she developed a feminist consciousness, starting a publication of her own called Elra’edda (‘Pioneer girls’) which opposed the colonial government. She also contributed to newspapers under a pen-name. When the school attempted to replace science with so-called ‘family science’ lessons which were considered more appropriate to girls, Fatima organised the first female strike in the country until science lessons were reinstated. She passed the Cambridge Certificate Examination, but her father forbade her from attending the University of Khartoum, so she followed him into teaching.

In 1947, she founded the Intellectual Women’s Association in protest at British colonial attempts to restrain Sudanese women’s participation in society. In 1952, Ibrahim joined other activists to found the Sudanese Women’s Union (SWU), with branches across Sudan. The membership grew to over 1,500, with participants from a range of social backgrounds recruited through engaging with women within their communities. She served as president of this organisation between 1956-57. Its aims were women’s suffrage and political representation, as well as educational and labour rights for women.

In 1954, after reading tracts passed on to her by her brother, Fatima joined the Sudanese Communist Party (SCP) and became a member of its central committee for a short period. The SCP was the only Sudanese political party which allowed women to join at the time. In 1955, she became the editor-in-chief of the SWU’s newsletter Sawat al-Maraa (Woman’s Voice) despite the fact that women were banned from working as journalists.

In 1964, after the October Revolution, women were granted suffrage including the right to run for office. The very next year, Fatima was elected to parliament. In 1969, the SCP supported Jafar Muhammad al-Nimieri’s coup. The accord between al-Nimieri and the SCP was short-lived, however. After a failed counter-coup in 1971, Fatima’s husband Elshaifie Ahmed Elsheikh was tortured and executed as a ringleader. Fatima had married Elsheikh, a trade unionist, three years earlier. The regime dissolved the SCP and Fatima and her comrades were thrown out of parliament. Fatima herself was placed under house arrest. She was occasionally detained in prison, where she befriended fellow prisoners. Even under house arrest she continued to defy al-Nimeiri, climbing into a club where he was speaking and loudly denouncing him until she was removed by his security detail.

After Omar Hassan al-Bashir and the National Islamic Front’s coup in 1990, people holding communist and secular beliefs were persecuted, and many of the political gains for women that Fatima had achieved were reversed. Fatima went into exile in the United Kingdom. She was arrested en route, but Amnesty International secured her release. She moved in with an aunt in Surrey, England.

The next year, she was elected as President of the Women’s International Democratic Federation. She was the first Muslim woman from Africa to hold this position. She was awarded the UN award for Outstanding Achievements in the Field of Human Rights two years later. In 2005, she returned to Sudan. Al-Bashir was under pressure after being indicted as a war criminal, and was strongly motivated to reconcile with former opponents. Fatima was appointed to a parliamentary role. In 2006, she won the Ibn Rushd Prize in recognition for her campaigning work in promoting women’s rights and social justice in the Arab world. However, she retired from politics in the next year due to her failing health.

As a religious woman and the daughter of an imam, Fatima was more than able to quote the Qur’an back at fundamentalists attempting to restrict women’s roles using religious arguments. She remained committed to a materialist feminism, resisting the liberal focus on identities: ‘What priority can sexual choice have to a woman whose child is dying of hunger in her own arms?’ she asked. She was also committed to economic redistribution, doubting the capacity of women to liberate themselves within capitalist societies: ‘Women will never be equal to men in a society where a man is not equal to a man,’ she stated.

The SWU’s campaigning had made enormous material changes to women’s lives, drawn from their work with women in their communities. This included legislation to require men to seek women’s consent to marriage, the abolition of laws demanding wives’ obedience, for divorce in cases of abuse, and maintenance for the children of divorcees.

She died in London, where she had moved to be close to her son. Her body was flown back to Khartoum for a full state funeral in keeping with her importance to Sudanese politics and history. This funeral showed the continuing importance of Fatima’s radical politics to progressive Sudanese. Mourners chanted anti-government slogans and removed government representatives from the ceremony, prefiguring the ouster of Omar Al-Bashir in 2019.