Roisin O’Laughlin grew up in the west of Ireland and came to London to train as an actress at RADA in 2008. After finding herself frustrated with the silencing of Arab female voices across history, she launched her exhibition ‘Radical Love: Female Lust’ to showcase the work of emerging and acclaimed female artists from the around the world including the Middle East. These works have been on display across the UK and are now exhibiting in Dublin’s Gallery X until November 26th. All of the art is for sale with profits going to Syrian refugees. We spoke to Roisin about the exhibition.

The show’s title, Female Lust derives from a relishing of life clearly felt across all the poetry, whether that be a sexual seduction or defiant rejection, a wistful longing or proud self-love. As most classical literature we are exposed to is male, it was so moving to read the words of mothers, princesses and concubines and to see that their names and words were valued enough to be recorded and passed down. They read to me like pop lyrics – short bursts, sublime in their intensity – which I thought would be a perfect stimulus for an artist and so asked two artists working in different mediums, from different cultures, to interpret the same poem, with 24 poems and 48 artists in total. It created a dialogue across the ages, across real and imagined borders. There’s a tendency to think of female liberation as both a modern and Western concept. I liked the idea of a show that totally challenged that. As well as the poets being Arab, most post-Islam, half the artists came from Muslim cultures.

Sexuality can be a controversial topic in the Muslim world. Have you received any pushback? 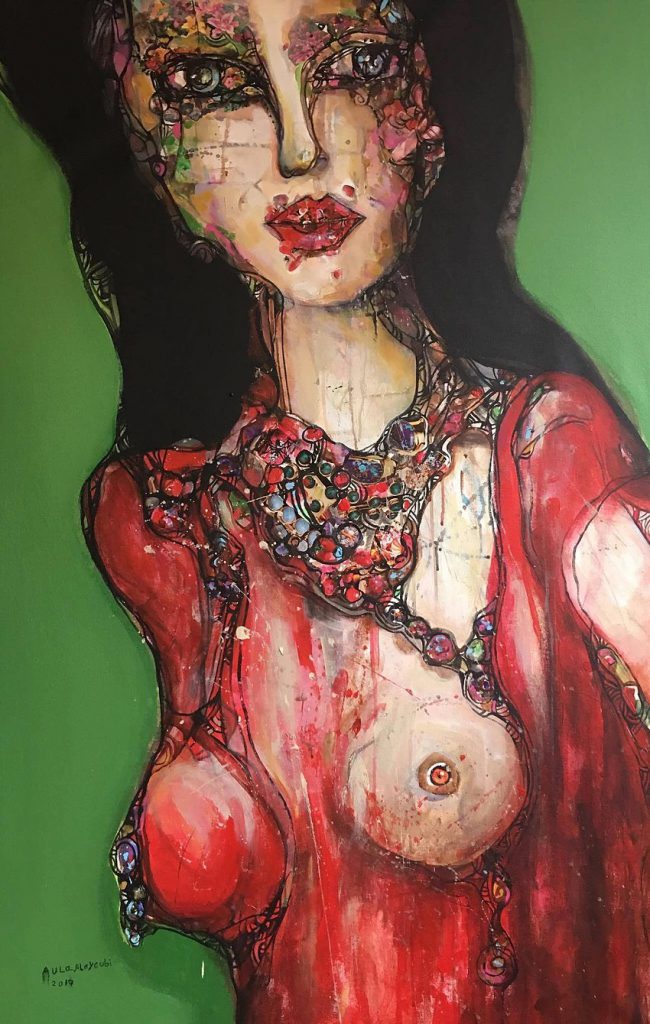 Not at all, the response has been overwhelmingly positive. The theme of sexuality did affect funding, in that I was told by Muslim and non-Muslims alike that it was considered too risky to get backing. One of the main things I thought I could offer this exhibition was my total outsider status, both within the art and Muslim world, as it enabled me to prioritise the artists’ freedom without influence, so in the end I chose to self-fund rather than compromise.

I think it also led to a hesitation on the part of mainstream press in covering the exhibition which was very disappointing. Considering so much of the press either patronises or vilifies Muslim women, it was a shame not to write about an exhibit showcasing the incredible artistic expression of so many Muslim women of the past and present.

What has been the response from people viewing this art – and from Muslim women in particular?

Really moving. Lots of tears! It was held in an old burial ground, in a Crypt below a church with statues of four Greek Goddesses outside so there was already a magical connection to the past. The thing I’m most thrilled about is that the show belonged to girls and women of colour, most of whom were from Muslim cultures – an audience of over 1,500 came thanks to Dazed, Gal-dem, Huck and Vice articles. We had black Muslim schoolgirls whose teachers had recommended it, groups of South Asian girlfriends taking selfies, Lebanese, Palestinian and Yemeni women bringing their daughters, Saudi Arabian and Kuwaiti art students… it was brilliant.

Depending on how busy it was, the atmosphere was full of joy and fun or more thoughtful and emotional, it changed according to the audience. Lots of girls were just so grateful to connect with these women, it really resonated, and with the poems displayed in Arabic as well as English, it was cool for those who could read the original.

We live in a world saturated by sexual imagery of women. What is it that makes the artwork in Radical Love so different from conventional depictions of the female body?

I think it’s all about what the intention is. So often women’s bodies are commodified, but the nudity and sexuality in Female Lust communicates a story or an emotion to us, there’s an intimacy.

Aula al Ayoubi’s woman is bare-breasted but demands that we recognise her pain, with the red of her dress mingling with blood, Elizabeth Wirija’s model has tears in her eyes and is photographed with great sensitivity, Iva Troj meditates on loss, Anu Ambasna and Hend al Mansour illustrate male nudity in a mocking and funny way… the list goes on, but in each case, there is sense of real life happening, the subjects are not products. 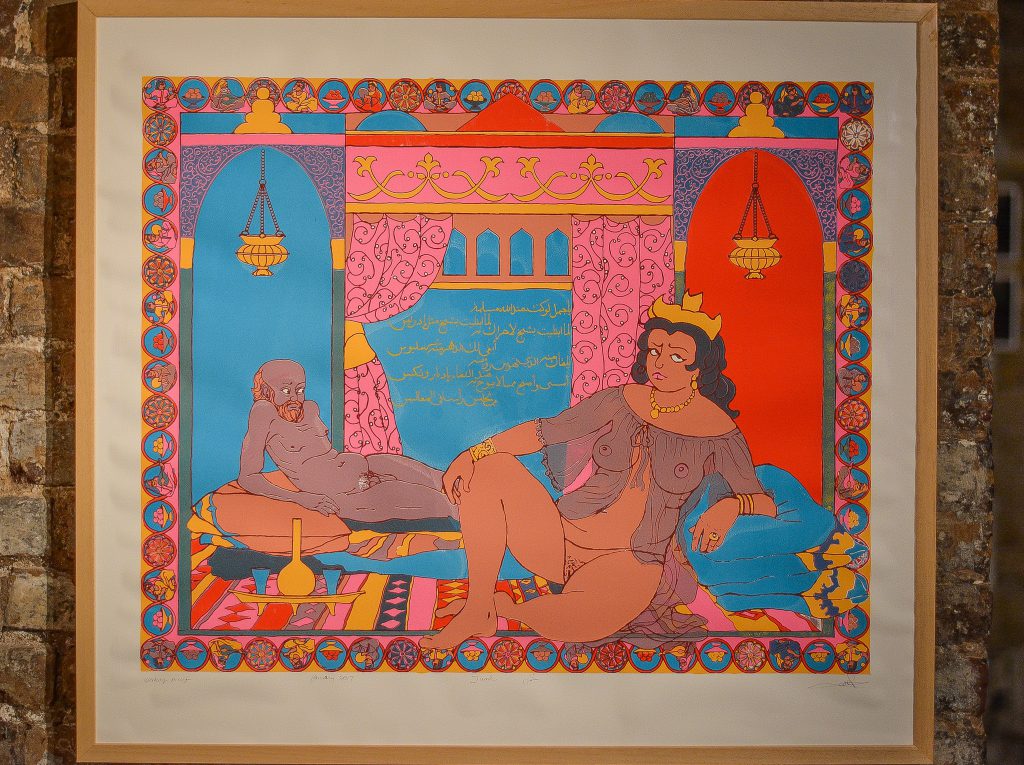 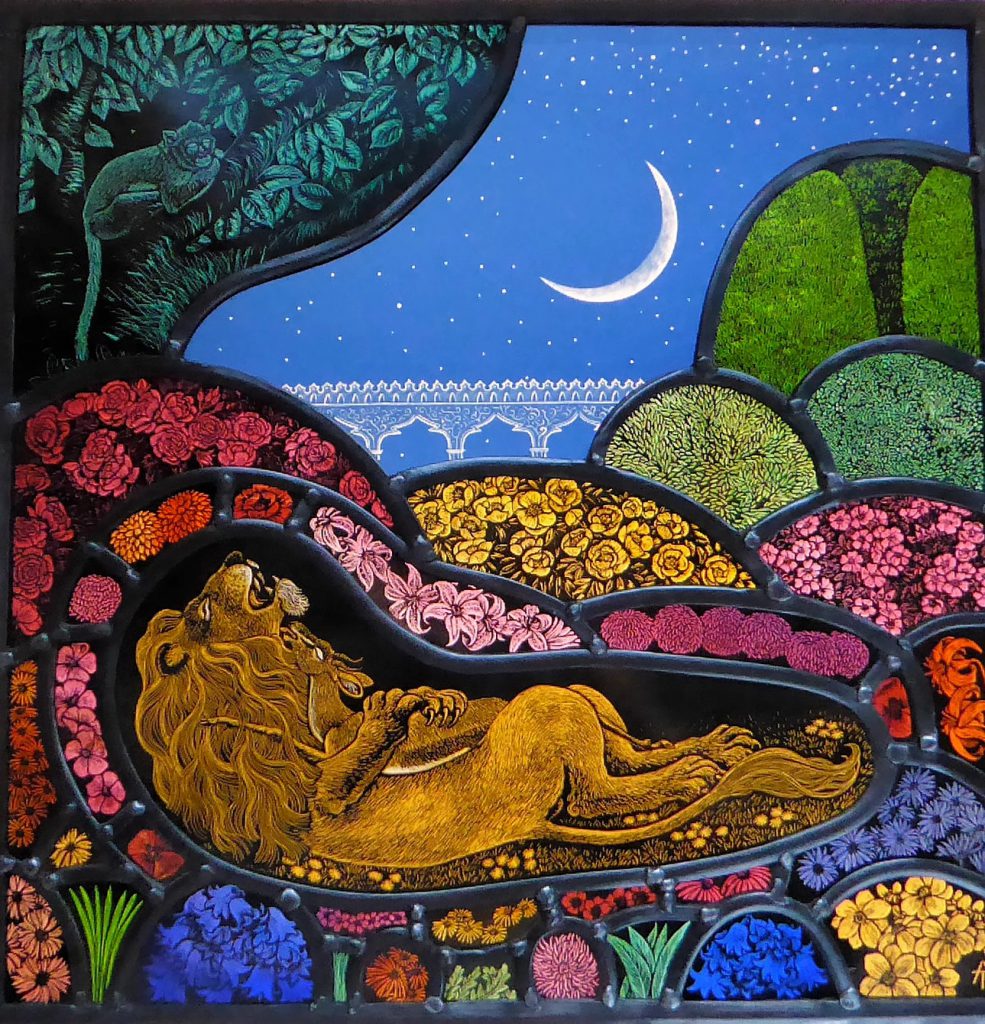 Are there any pieces of the collection you find particularly powerful or moving?

There are so many! Tamsin Abbott’s stained glass lightbox of a gazelle and lion nestling in under a host of different flowers is the thing I would most love to keep [right], Hend al Mansour’s illustration brings me joy [pictured above], Mikela Henry Lowe’s portrait is stunning… but of all, it is the work of the four Syrian painters Aula al Ayoubi, Darin Ahmad, Noor Issa and Yara Said that move me the most. The way they pour their souls into their art embodies the female lust for living the show celebrates. Getting to know them as people, and seeing how they live their lives has given me hope in a very bleak year.

What are you hoping will be the broader impact of this exhibition?

I started Radical Love two years ago to help Syrian refugees when I had a Christmas concert to raise money for Hand to Hand with Syria. Female Lust is a continuation of that, with profits from the sale of the Artworks split between the artists and the Global Fund for Women helping Syrian refugees.

I’d love if Arab and Muslim women, both those involved in the show and those who’ve seen it, feel valued and recognised for their immense worth at a time they are often reduced in society.

Female Lust has now been in London, Northern England and Ireland and I know it’s changed many people’s perceptions, I hope it continues to do so for those who read about it. 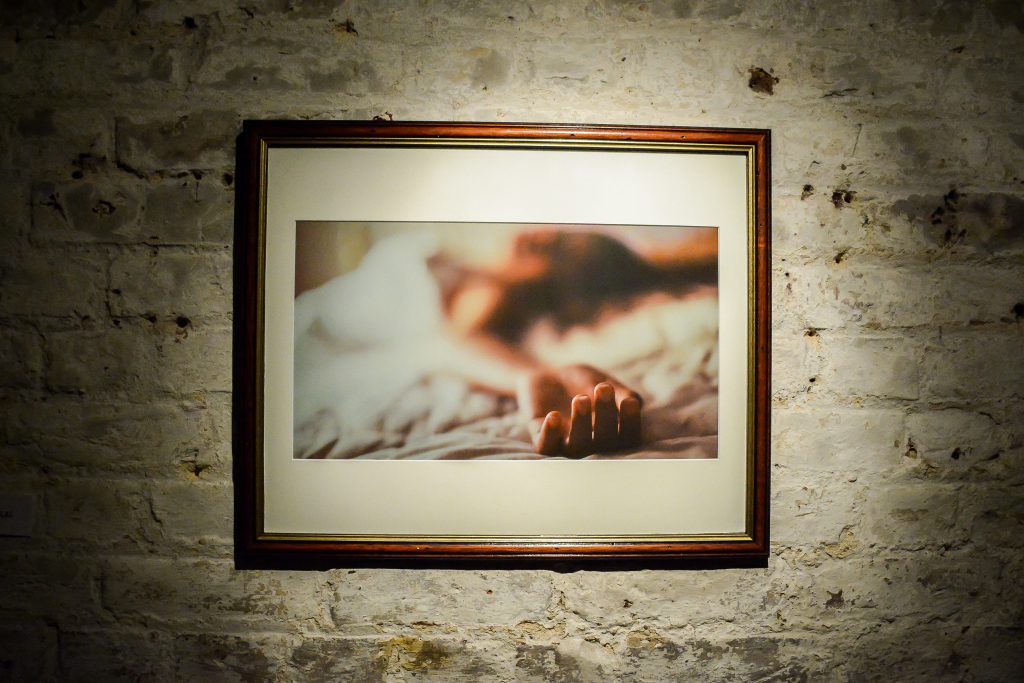 What are your future plans?

Radical Love #FemaleLust is in Dublin’s Gallery X as I write this and I’m hopefully taking it to Granada in 2018 because so much of the poetry is from Muslim Spain, so fingers crossed for that! I’m an actress and have worked for 2 years with zero funding so I had planned to take a break, but another idea has been floating in my mind so…who knows!

What most inspires you in the current art scene?

I’m not from an art world but black women inspire me in every scene. What Liv Little has done with Gal-dem, Nicole Krystal and Paula Akpan with Black Girl Festival, Solange Knowles musically, discovering June Jordan’s poetry, Michelle Obama’s almost superhuman dignity, young women like June Eric Udorie and Marley Dias making big changes, my MP Marsha de Cordova… I feel like I learn a huge amount from the combination of intelligence, resilience and integrity of these women.

What’s exciting right now is that it feels like across the world, women are rising up. I was filled with hope when I came across these poems because they proved that women like this have always existed and always will, whatever external restraints they’re faced with. It’s just a question of how their thoughts find expression.

Radical Love: Female Lust is exhibiting at Dublin’s Gallery X until November 26th. Profits from the exhibition will go towards helping Syria’s refugees. Donations can be made here.