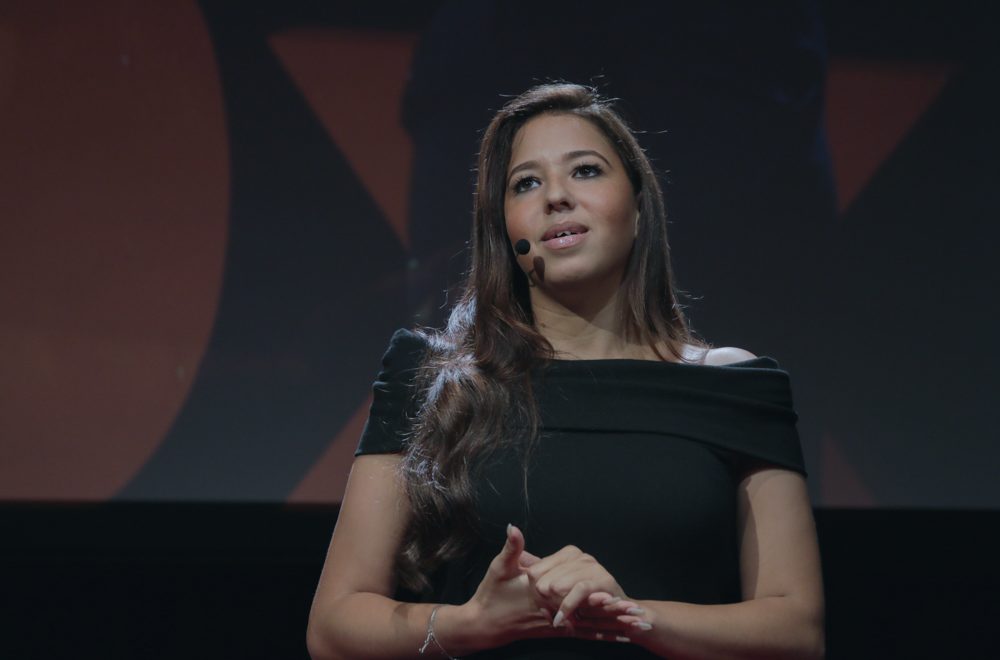 “I am always finding belonging in new and different ways”

Writer, poet, and spoken word artist, Salma El-Wardany was born in Egypt and raised in England. She describes herself as ‘fighting for a new narrative surrounding Muslims.’ We spoke to her about Islamophobia, COVID-19 and her work to date.

Many young Muslims live within a culture of secrecy due to strict parental boundaries. What were your experiences of that, and how do they impact you?

I had plenty of Jekyll and Hyde moments growing up, which is to say I often lived two very separate lives. One in the mosque, with the Muslim community and my parents, my headscarf firmly in place, and one with my friends, out in a club with my headscarf firmly tucked in my bag and out of sight. You become very adept at shifting between worlds and presenting the version of yourself that the environment requires. I always used to think that growing up Muslim in non-Muslim countries was a lot like having horcruxes and splitting yourself into so many different parts. Geeky Harry Potter reference I know, but oddly apt.

Most Muslims I know live separate lives. I think it’s important to remember that it’s not just parents that impose boundaries, but also the wider community and the prevailing ideas of propriety they have always lived by. Muslim communities are heavily influenced by the cultures surrounding them and those cultures are often ones that encourage segregation between the sexes, modesty, marriage, no dating etc. I think it’s quite natural then that when young Muslims are growing up and begin to experiment that they push against those boundaries. The problem with the boundaries imposed by Muslim parents or communities is that they’re not realistic and incredibly damaging. When the boundaries become harder things become unsafe because young people will always find a way to step outside of the rules and do things anyway, they’ll just do them in secrecy and in dangerous ways. I’ve always found the boundaries imposed to be completely unnecessary. For example, don’t talk to boys, don’t be seen with boys and don’t be friends with them, however, the minute you reach a certain age you’re supposed to marry a nice Muslim boy from your community, but you’ve spent your whole damn life avoiding them and not talking to them. It has always seemed completely and utterly stupid to me. That’s an unnecessary boundary. Let the genders mix and be friends and let them do it in front of you – then maybe they’d be less inclined to sneak behind their parents back.

I did plenty of sneaking around when I was younger and fell in love with a man I couldn’t tell my parents about, or be with. The heartbreak and repercussions of that is something I still deal with today.

Such attitudes are particularly impactful on sexual expression. How has your life and culture impacted your relationships?

I am extraordinarily lucky in that a lot of the shame experienced by other women I know bypassed me. I never felt shame about my relationships. I lost my virginity to a man I deeply loved and planned to spend my life with, and to me that wasn’t something wrong or sinful, it was an act of love. However, my relationships have been conducted in secrecy and that often has a negative impact. I wish I had been able to bring my boyfriend home to my parents, talk to my mother about my relationship and involve them in this huge thing that was happening in my life. I often feel quite sad that these huge relationships I was a part of were mostly hidden from those I loved most.

Deeyah Khan has spoken about the power of being in-between cultures in terms of the varied perspectives it gives you. However, you’ve explained that it can also be disorienting. How do you manage your multiple identities? What have your experiences been? How have they changed over time?

Ha, I don’t know if I’ve ever ‘managed’ my multiple identities, sometimes I feel like they manage me and I have very little say over it. Deeyah is right, it’s incredibly powerful to belong to so many different cultures, but it’s also incredibly lonely and difficult at the same time. For as long as I can remember I’ve wanted to belong, but if you’re a mixed-race Muslim kid living in England, belonging is a bit of a myth. My lack of belonging has been one of the greatest sadness’s of my life, and in searching for my tribe, my people and someone to belong to, I’ve made lots of terrible decisions. Ended up in relationships I should never have been in. Left ones I never should have left. It’s been hard. I spend the years trying to reconcile it all and come to terms with my identity, and the only thing I’ve ever really been able to fix on is that identity is fluid and ever evolving. Therefore, I am always in transition with my identity, always moving it, claiming it, reclaiming it and constantly finding belonging in new and different ways.

What are the limitations of singular identities?

I think you can end up with quite a narrow world view. An idea that the way you and your culture exist is the only way and the only right way. I see it in British people, in Arabs, in Pakistani people, people who belong to one culture and have one very firm and fixed identity. They are often, and of course there are exceptions, unrelenting in how they believe life should be lived. I know my Pakistani grandma does not believe or adhere to a life lived outside of marriage and children and typical gender roles. On the other hand, I’ve got British friends who cannot fathom the life my grandma lives. The privilege of belonging to so many different cultures and having separate identities is that I get to see life being lived in very different ways and I like to think that gives me a wider horizon.

How do you think negative stereotypes can be challenged?

I think we challenge them by honestly and openly living multi-faceted lives. There is never any point in vocally refuting a stereotype, you just have to live outside of it. People do it every day, but they’re not always open about it. For example, a Muslim family might celebrate Christmas because they’ve lived here all their lives, but they might not always be open about that because other Muslims don’t agree. All that secrecy and sneaking around and judgement just has to go. I think we also challenge them by opening the door more to people who aren’t Muslim, which again is something the Muslim community haven’t been great at doing. By letting those who aren’t Muslim be more involved in our culture and way of being.

You’ve written a savage attack upon respectability politics in relation to Islamophobia. What do you think needs to be done to challenge prejudice?

Haha, I didn’t think it was that savage but looking back perhaps it was. I was pretty fed up at the time of writing it. I’m just tired of apologising. It feels like Muslims are forever apologising for even existing, and I don’t think that’s the way we challenge prejudice or dismantle stereotypes. I think we do it by telling our stories. I think those in positions of power have a responsibility to highlight and put those stories forward. Publishers should be publishing Muslim authors and stories. They should stop publishing terrorist narratives. Commissioning editors and directors should be looking for films and TV series in which characters are Muslim and the entire storyline isn’t centred around the fact that they’re Muslim. We need to see Muslims everywhere just as normal people and not as terrorists, suicide bombers or Jihadi brides, and currently, we don’t see them outside of those narratives so of course there’s prejudice towards us.

What do you appreciate about poetry as a form of expression?

You can take the biggest most chaotic human emotion and distil it down into a couple of sentences that have the power to punch you in the chest and take your breath away. It always hits you where it hurts. It may be sadistic of me, but I find that incredible.

How do you see attitudes towards minorities shifting, from Brexit to COVID-19?

When tensions rise so does intolerance, so I can’t see it getting any better to be honest. We’re already seeing reports of corona virus affecting people of colour (POC) more and the death toll within POC communities rising. In times of huge economic shifts and hardship, both of which will be happening due to Brexit and COVID, it becomes about who has access to support and finance. Minorities already don’t have great access, and so the doorways just seem to be narrowing for us all.

As a survivor of domestic violence, do you have any messages for women suffering – particularly those currently under lockdown with their abusers?

Always try to tell someone close to you what is going on. Even if that doesn’t mean you’re going to take direct action, just speak your abuse out loud to someone you trust. So much abuse happens in silence and shame and often it’s not until you tell someone and see/hear their reaction that you even realise or comprehend how bad it’s gotten. A lot of the time the idea of leaving hasn’t even occurred to you, because that’s how abuse works. It breaks you down and takes away your agency. When I was in my abusive relationship I never once thought about leaving, which seems unbelievable to say out loud, but in the darkness and embarrassment and shame of abuse, the thought doesn’t even come to you.

How will you be spending Ramadan this year?

Alone in my house thanks to COVID-19. Which does mean I can take more naps, especially in that eternal hour before you break fast, so there is that plus side.

What have been some of the highlights of your life so far?

There’s the obvious stuff like two TEDx Talks, being published, having my own radio show, travelling the world, starting my own business, but the real highlights are always when I am with people I love. Sitting on the grass in the sunshine laughing with my friends. Walking through London in the hot summer evenings as we all head to our favourite restaurant. Being loved by my first boyfriend and having the privilege of loving him back. Sitting with friends halfway across the world on a beach in Australia as we watch the sunset. Meeting my nephews when they were born. That kind of stuff. I think love, in all its forms, is always the highlight, and I have been fortunate, and lucky enough, to be very loved by some really incredible people.