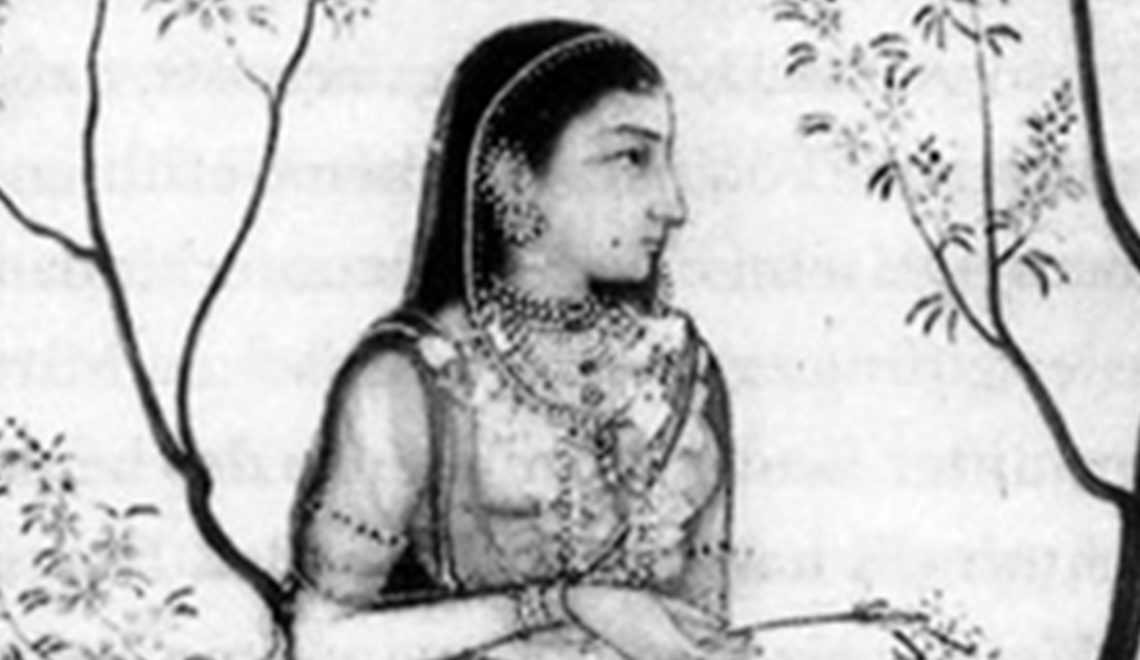 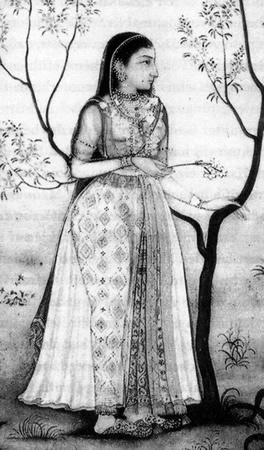 Mughal princess, Sufi scholar and poet, Jahanara was the most powerful woman in the Mughal Empire for nearly thirty years of her life, responsible for shaping the city of Shahjahanabad, and managing the imperial household. Jahanara was the much-beloved eldest daughter of Shah Jahan. She had a particularly close relationship with her younger brother, Dara Shikoh, who was expected to inherit his father’s position. Following Dara’s birth, her mother Mumtaz Mahal bore three more children: Shuji, Roshanara and Aurangzeb.

Due to military clashes between her father and his father, the Emperor Jahangir, the family moved to luxurious to tents in the Deccan. Upon Jahangir’s death, her father seized power for himself. He ordered the execution of all competitors to the throne and sent the Emperor’s widow Nur Jahan into exile. From the age of 14, Jahanara grew up surrounded by concubines and wives in the court, travelling the empire with her father as well. She was often occupied with nursing her ailing mother.

Her mother died in 1631, at which point Jahanara took on the role of ‘first lady’ of the Empire, taking the title ‘Keeper of the Imperial Seal’. She was responsible for managing the royal household, including arranging marriages for her brothers. She received half of her mother’s wealth, with the remainder shared between her siblings, in recognition of her responsibilities. She was granted an allowance of four lakh rupees; an army of officers and servants were placed at her disposal.

Her brother Dara continued to rise in status at court, whilst his brother Aurenzeb was sent around the Empire as an ambassador. Dara, devastated by the death of his first-born daughter, sought comfort in faith. He introduced Jahanara to the teachings of the Qadiriyya order. Her Timurid heritage increased her interest in Sufism and she responded passionately to Sufi thought, making four trips to Kashmir to study under Mullah Shah Badakshi. On these spiritual retreats she meditated, composing poetry with a distinctly erotic quality. Her faith inspired her to write two books: a biography of the Sufi mystic Moinuddin Chishti and a spiritual autobiography, the Risala-i-Sahibiya, the only 17th century memoir by a Mughal woman. Jahanara paid for the construction of mosques; one in Agra which contained a zenana to allow women access to worship and participation in Sufi rituals, and another dedicated to the memory of Shah Badakshi, for which she specified the addition of a pavilion for women.

Shah Jahan determined to create a city to reflect his power – Shahjahanabad – which was built on the banks of the Yamuna. Jahanara played an important role in the development of the city. She built a personal mansion, and designed the city’s central bazaar, the Chandni Chowk, containing 1,560 shops and irrigated by a central canal, welcoming traders from across the Mughal Empire and beyond. Chandni Chowk developed into a vibrant and diverse community of artists and intellectuals. Jahanara commissioned a large caravanserai to accommodate travellers, equipped with a mosque, garden and courtyard. She also developed an enormous pleasure garden, which supplied fruit for the Imperial table and for sale in the markets.

In 1644, a disaster occurred: Jahanara was catastrophically burned. She was dressed in layers of fine, loose muslin which had been doused in perfume which caught light on an oil lamp. Her whole body was engulfed in flames, which killed two of her female servants who tried to rescue her. Her life hung in the balance for weeks whilst her father dedicated his time and the resources of the empire to save her, sparing neither effort nor expense. Eight months later, Jahanara finally recovered: Shah Jahan expressed his joy by gifting her the port of Surat, a brand-new ship, and her weight in gold.

After the disastrous siege of Kandahar, her brother Aurangzeb faced a humiliating demotion and harsh criticism from his father. This fuelled his resentment the heir presumptive, Jahanara’s closest ally, Dara Shikoh. Jahanara’s influence had long been resented by her sister Roshanara. Roshanara and Aurangzeb formed a secret partnership, mirroring Jahanara and Dara’s lifelong bond, in order to challenge Dara’s succession. The two men had clashing values. Aurangzeb’s austere, military bearing was very different from Dara’s urbane, arrogant liberalism; his devout and uncompromising religious beliefs were very different from Dara’s esoteric, syncretic Sufism. Aurengzeb, increasingly harried by demands and criticism from Shah Jahan, nursed his resentments through correspondence with Roshanara.

Shah Jahan fell sick in 1657. Dara and Jahanara attempted to hide his illness from the public in order to reduce the chance of a succession crisis, but Roshanara alerted Aurangzeb, whose ambitions and resentment erupted in action. He gathered an army of 40,000 soldiers, initiating the longest war of succession in Mughal history, ultimately capturing his father and imprisoning him at the fort in Agra under Jahanara’s care. Aurangzeb organised a lavish coronation for himself as the sixth great Mughal ruler. Months later, Dara was captured and dragged to Shahjahanabad, paraded through the bazaar, imprisoned and finally executed.

In 1666, Shah Jahan died, legitimising Aurangzeb’s rule and liberating Jahanara from the responsibility for his care. Jahanara made efforts to placate Aurangzeb and was restored to her position at court as Padshah Begum at the age of 54. Jahanara dedicated the last phase of her life to educating her niece, arranging marriages, and holding literary and musical gatherings. She was to be a generous patron of charities and the arts until her death. She was buried in a simple tomb of her own design, featuring a modest inscription, which makes a striking contrast to the wealth and influence that characterised her life:

Let nothing cover my tomb save the green grass

for Grass suffices well as a covering for the grave of the lowly.