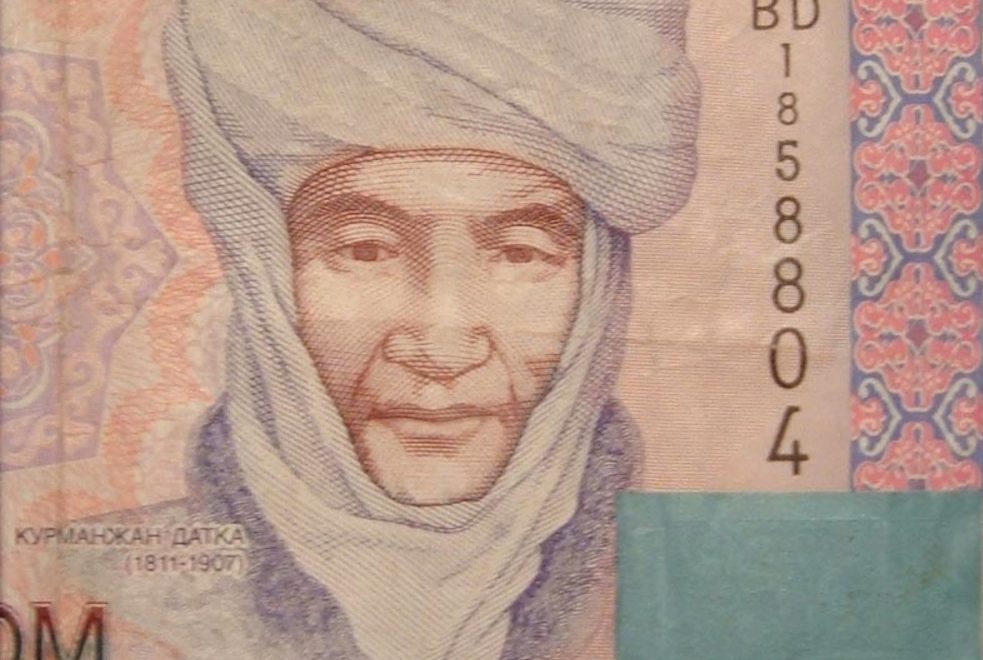 I subdued my grief,
To save my people from tribulation,
I hid my grief in my heart,
Not to drag my people into trouble.

Kurmanjan Datka is regarded as the mother of the Kyrgyz peoples for her efforts to make peace with Russia and preserve the Kyrgyz identity.

Kurmanjan was the daughter of Mamatnay, a nomadic Kyrgyz tribesman and stockbreeder from Mungush. She was known for her skill on horseback and her strength of will. She was put in an unwanted arranged marriage with a much older man but escaped, possibly fleeing to China to avoid repercussions. Three years later, she came into contact with Alymbek Datka, of the Bargy tribe of Adygene, and was involved in negotiating the inter-tribal conflict occasioned by her refusal to marry. She married Alymbek in 1832, after she had secured a divorce. They had two sons and two daughters together. Alymbek was the ruler of the Alai valley, and committed to Kyrgyz unity and self-determination. At that time, contemporary Kyrgyzstan did not exist: the Kokund Khanate was the main trade centre with Russia and China in the Fergana valley. Other trade centres were Tashkent and the Bukhara Emirate.

After Alymbek was assassinated in 1862 in a palace coup, Kurmanjan assumed his role, with support from other local leaders, and her own personal army of 10,000 men. It was very unusual for a woman to assume the title of Datka; few other women had done so, and none as well-known as Kurmanjan. She was noted for the wisdom with which she settled tribal disputes. Her authority was recognised by the local khans. As a ruler, she was tolerant of diversity, shown by artefacts in Turkic, Farsi, Kyrgyz and Arabic scripts written during her reign. Most significantly, she was able to complete her late husband’s ambition to unite the quarrelsome Kyrgyz tribes.

However, whilst Kurmanjan was campaigning for national unity, Russia was growing in power after the end of the Crimean war. It had already conquered the northern regions of Kyrgyzstan as part of its movement towards colonial India. The Tsar’s forces took Tashkent in 1865, Samarkand in 1868 and Kokand, Osh and Andijan in 1875.

Despite the fact that her husband Alymbek, and some of their children had borne arms against Russian expansion, Kurmanjan realised that it was futile to oppose the Tsar’s army and its deadly cannons any further. She determined that the only way that the Kygyz culture could survive was through brokering peace with Russia. In 1876, the Kygyz of Alai became a protectorate of Russia. She was able to negotiate self-determination for the Kyrgyz peoples, and was given the title of Tsarita Alaia (Queen of the Alai), as well as being the Emir of Bukhara and Khan of Kokand. In that year, two of her personal guard rescued two British emissaries to Russia who were at risk of dying in a snowstorm, a gesture of cooperation with the Russians.

The peace brokered by Kurmanjan is likely to have determined the continued existence of the Kyrgyz peoples, but it came at an enormous personal cost. Over time, her ally General Skobelev was overshadowed by the more aggressive General Shyyikovski, who was hostile to the Kyrgyz. In 1893, Kurmanjan’s sons, including her favourite, the eldest Kamchibek, were accused of smuggling. Kamchibek’s great-grandson says that ‘the Russians stopped Kamchibek’s caravan on the way to China one day and they saw a chest of gold’. They were also accused of murdering a border guard with paltry evidence. She decided that peace with Russia came first and refused to mount a rescue to prevent the execution of Kamchybek, or the exile of his brothers Mamytbek, Myrzapayaz and Arlsanbek to hard labour in Siberia. After the execution, she withdrew from public life in grief, and isolated herself in a remote area.

At the age of 96, she was visited in her seclusion by the traveller Carl Gustav Mannerheim, a spy for the Tsar. He described her as wearing a fur-lined brocade robe and white head-dress, and as being attended by two elderly servants. Despite her age, she was still an able horsewoman. He took a photograph of her sitting cross-legged in her yurt, which is the basis of the portrait printed on the Kyrgyz 50 som banknote. She died six months after his visit and was buried in a cemetery near the holy Sulayman mountain. She was survived by two sons and two daughters, as well as several dozen grandchildren and great-grandchildren.

Statues of her are found across Kyrgyzstan, including in the city of Osh. A film of her life, called Kurmanjan Datka, Queen of the Mountains, was produced in 2014.