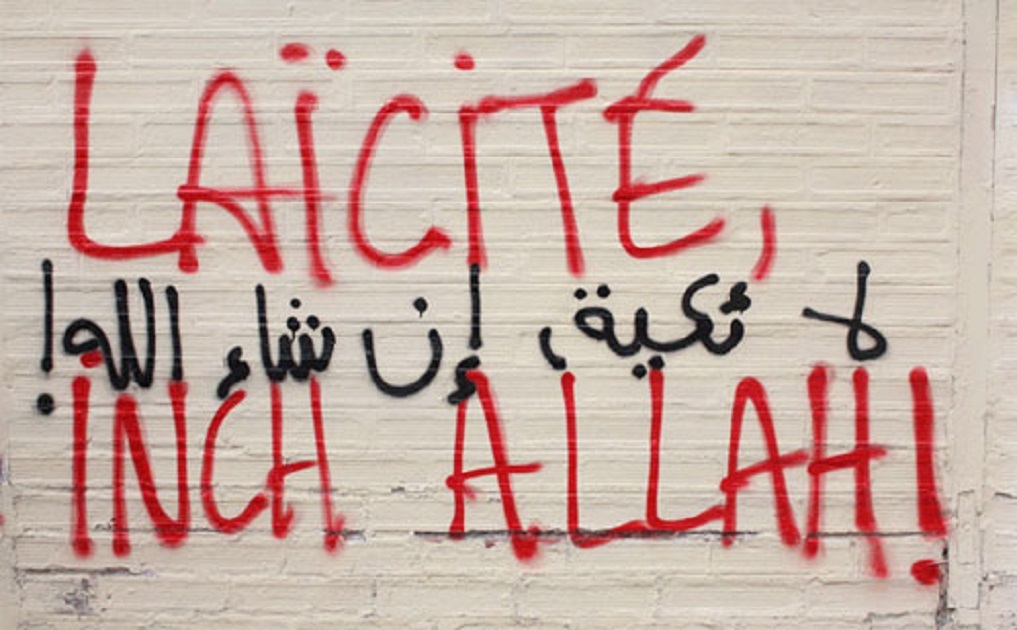 The title of Nadia el Fani’s documentary Laïcité Inch’allah (previously Ni Dieu, Ni Maître!) roughly translates as ‘Secularism, god willing!’ – an ironic phrase taken from an Arab Spring graffito the director spotted in Tunisia. Filmed both before and during Tunisia’s Arab Spring, the film provides a portrait of Tunisia’s social undercurrents – the secret rebellions and hidden hypocrisies of life under religious control – and their eventual eruption into a political protest on the streets of Tunis. El Fani was editing her initial film when the uprisings began, and hurried back to get footage of the uprisings, capturing the chaotic, fizzing sense of potential they represented.

As a film which had the initial intent to use the pressures around fasting at Ramadan as a representation of Tunisian’s everyday rebellions to their regime, she captures the white lies and evasions of a populace pressurised into conforming to religious mores, often providing a vivid soundtrack, which includes Tunisian street music. El Fani’s voiceover is never more drawlingly sardonic than when she reads out the official rules of the state.

These rules include provisions that only allow non-Arabs to purchase alcohol during Ramadan – the exception certainly benefits Tunisia’s tourist trade. This ruling forces hotel and waiting staff into a ludicrous guessing game in order to determine which of their customers are French, and which are Tunisian. Similarly, a vendor of alcohol swears to the camera that no one is stocking up before he and his co-workers close for a month; meanwhile, queues of men and women pack crates of beer into the boots of their cars.

Some Tunisians defiantly proclaim their non-adherence to fasting; one man, barely skin and bones already, declares that if he fasted he would surely disappear; a young woman gleefully recounts scandalising her mother by being found dead drunk during the fasting period. El Fani and her friends even organise a picnic on the beach to make their rebellion clear, one extemporising a song on a guitar in honour of the event. But in larger groups, the pressure upon Tunisians to conform is obvious. A textile factory full of women expresses a vehement support for fasting, despite the hardship and productivity costs it incurs. As el Fani and her camera breach an apparently closed coffee shop, the men put their cups and cigarettes down in order to cover their faces with their hands.

It was former president Zine El Abidine Ben Ali who ordered restaurants to conceal their activities under ‘hideaways’ in order to receive a dispensation to operate over the Ramadan period. In the footage taken before the revolution, Ben Ali’s face looms from billboards across the city. This authoritarian imagery dissolves into the hectic, colourful energy of the Arab Spring, characterised by graffiti and hand-painted protest signs. The disjoint between the intimate, unhurried tone of the footage shot in the first phase of production, and the jostling crowd scenes during the revolution is jarring, but indicative of private grievances spilling into political action – an invisible resistance finally becoming visible.

While Tunisia is often described as the most secular Arab country, it is not, as el Fani asserts, fully laïque, due to its failure to retain neutrality on matters of conscience. She identifies the increasing pressure to conform to Ramadan fasting as an aspect of rising fundamentalism in the Islamic world, which is expressed, for instance, through the move to broadcast the call to prayer on Tunisian TV. Indeed, these tensions between secularists and fundamentalists are an even more heated aspect in the culture wars of post-revolutionary Tunisia. In fact, one of the major battles in this culture war was el Fani’s film: a 2011 screening was disrupted by attacks by several dozen protestors who sprayed the audience with tear gas. Twenty-six men were arrested. Salafists scuffled with police when they were charged, and protests were held across Tunisia.

Broadcast at the ‘Celebrating Dissent’ event at DeBalie, Amsterdam, Laicite Inch’allah was followed by a panel discussion involving el Fani and other speakers who found resonances in their own experiences. Hind Bariaz tracked Morocco’s practice of Ramadan back to French colonial laws, whilst former Imam Wissam Charaferddine testified to the pressure to conform in Muslim-majority communities in the United States. Zara Kay, from Tanzania, reinforced the insularity of minority Muslim communities from her own experiences. Karrar Al Asfoor spoke to the pressure of organising online in the face of malicious reporting by extremists. Many panellists had negative experiences of social media, with el Fani in particular finding Facebook reluctant to deal with large groups organised to harass her in the aftermath of the attack upon her film at the Habib Belhedi cinema hall for several years.

For el Fani, as for the rest of the speakers, there was no question of being silent: ‘They have to know we are here, that we exist’, she insisted.