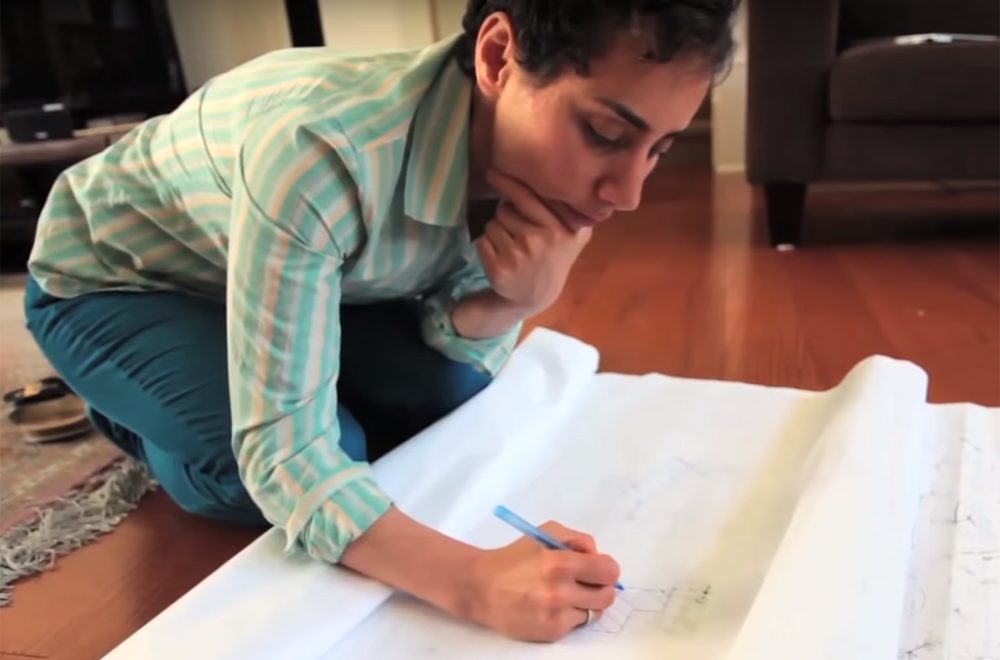 Maryam Mirzakhani was an Iranian mathematician, and the first woman to be awarded the prestigious Fields Medal for her work in the field of mathematics.

She was born in Tehran two years before the Iranian Revolution and finished elementary school in the year that the Iran-Iraq war ended, entering the education system in a time of relative political tranquility. In 1988, she was one of a hundred girls admitted to Farzanegan School, an elite school for gifted girls, as part of NODET, a cutting-edge programme to develop exceptional intellects.

She did not immediately shine in maths: a fellow student recalls that when she received a B grade for her homework she tore up her paper and declared that she was done with mathematics, and that it was the one class where she did not excel. As a young girl, she had preferred literature to science, both reading and writing fiction, and spent her free time wandering around bookshops with her friends. She was also inspired by accounts of the lives of prominent women, such as Marie Curie and Helen Keller.

Her energy was directed towards mathematics through the encouragement of her brother and several dedicated teachers who inspired her. The principal of Farzanegan was a determined woman who persuaded education officials to allow the girls from her school to attend summer camps to develop their abilities in science and maths, and to enter international competitions. She became another of Maryam’s role models.

During the summer of 1993, at 16 years of age, she attended a workshop on graph theory which resulted in her first academic publication in a peer-reviewed journal. The next year, she gave a presentation at the ‘Math Olympiad’, being one of the only two female members of the national team alongside her friend Roya Beheshti Zavareh. She received gold medals in Hong Kong and Canada, in one case achieving a perfect score.

After graduating high school, she entered Sharif University of Technology in Tehran, one of the largest engineering schools in Iran. Despite rigorous entrance requirements which eliminated some 95% of entrants, she was accepted to this elite institution, matriculating in 1995. In her first year, she won a prize for solving one of the unsolved maths problems posed by Hungarian mathematician Paul Erdós. The next year, however, she survived a traumatic accident when travelling on a bus which plunged over the edge of a cliff. Seven students died in the tragedy. In 1999, she co-authored a book in Farsi with her school friend Roya, called ‘Elementary Number Theory’.

Despite her accomplishments, her transition to post-graduate study at Harvard University was disconcerting. Although she felt ‘clueless’ at first, she obtained her PhD within five years under the guidance of Curtis McMullen, who himself had won a Fields Medal in 1998. She left Harvard to take up a fellowship at Oxford University, then returned to the States to teach at Princeton University. Before she was 30 years old, she had been included in Popular Science’s annual ‘Brilliant 10’ round-up, in recognition of her innovative impact on mathematics.

From Princeton, at 32 years of age, she relocated to Stanford University, where she was awarded a professorship. She flourished at Stanford, winning multiple awards, including the Fields Medal, which was presented to her in Seoul, South Korea. This award, reflecting the achievements of young mathematicians, marked her outstanding contributions to the field of Reimann surfaces. She was the first woman and the first Iranian to win this award since it had been founded in 1936.

Despite her huge accomplishments, Maryam was a modest woman. She did not even inform her parents that she had been awarded the Fields Medal and initially thought the email announcing that she had won had been sent to her in error. She married a colleague, Jan Vondrák from Czechoslovakia in 2008 and they had a daughter they named Anahita. She retained her passion for reading, taking advantage of audio books in her spare time.

In 2013, she was diagnosed with breast cancer. She carried on working, becoming the first Iranian woman to be elected a member of the National Academy of Sciences. Despite a gruelling regimen of treatments, the cancer spread throughout her body and she died a few months after her 40th birthday. ‘Maryam is gone far too soon, but her impact will live on for the thousands of women she inspired to pursue math and science’, said the President of Stanford University.

Many Iranian newspapers marked her death ignoring the taboo on women’s uncovered heads, showing her with her characteristic short crop on their front pages. Upon her death, it emerged that Maryam’s attempts to obtain Iranian citizenship for her daughter had failed. In response, sixty members of the Islamic Consultative Assembly proposed changing the law to allow Iranian mothers to pass on citizenship to their children, irrespective of the fathers’ citizenship. However, this was not taken up and thousands of children born to Iranian mothers – often with fathers who were refugees from Afghanistan – are still denied Iranian citizenship.

The American Mathematical Society established lectures in her name, and Farzanegan School and the Sharif University of Technology both named libraries after her. In Iran, the anniversary of her birth is commemorated as the National Day of Mathematics.