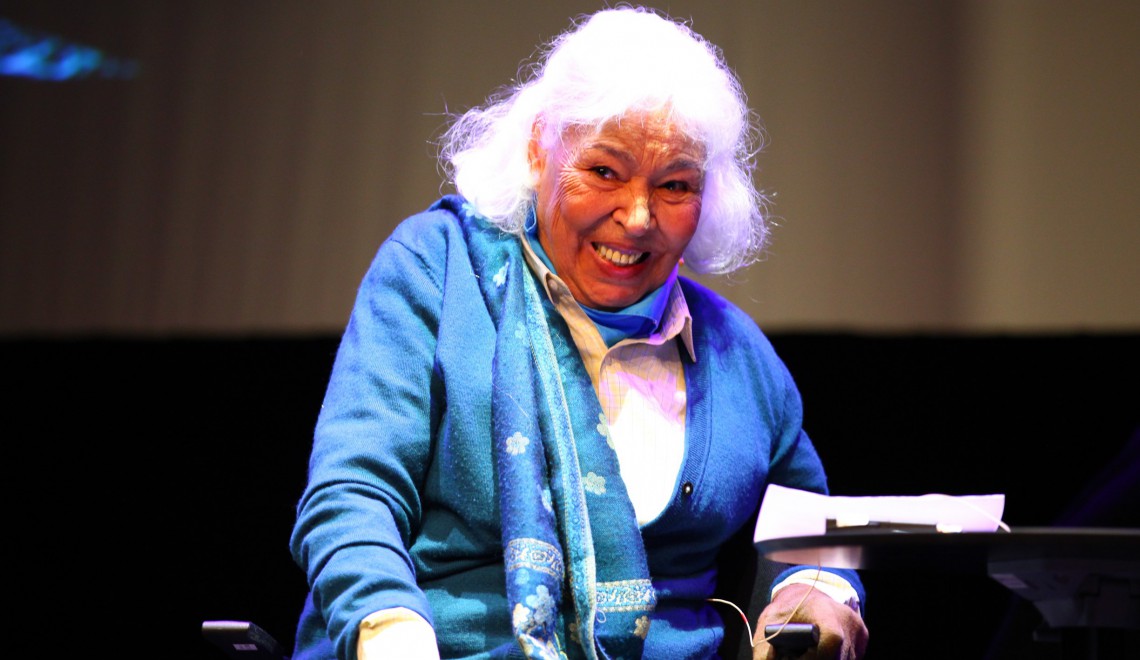 The oppression of women is historical. We have to liberate women economically, socially, psychologically, physically, religiously. – Nawal el Saadawi

Nawal el Saadawi was one of the foremost, and most controversial, feminists in the Arab world, whose fierce and uncompromising positions were inspirational within her own generation and foundational to the development of secular feminism in the Arab world. She campaigned against veiling, inequality in Islamic inheritance rights, polygamy and female genital mutilation. She wrote at least 55 books, both fiction and non-fiction, and her work translated into over 20 different languages. In English, the best known of these is her novel Woman at Point Zero, featuring the life story of a woman in prison, and The Hidden Face of Eve, a feminist treatise on the situation of women in the Arab world.

She was born in Kafr Tahla, a village to the north of Cairo, the second of nine children. Her father was a teacher and anti-colonial activist and her mother came from a family of Ottoman Turks. From an early age, she was conscious of sexism within her family and community, and resisted a forced marriage at a young age, with the help of her mother. She was also subjected to female genital mutilation at the age of six, a memory which traumatised her and which formed a constant theme in her activism. She received a complete education, attending Cairo University and then Colombia University in New York. She had no particular interest in a medical career, but as a brilliant student was awarded a scholarship to study medicine. After gaining a medical degree, she began practice as a village doctor.

She married her first husband Ahmed Helmi in the year she graduated. However, the marriage did not last long: Helmi was a soldier during the Suez crisis. Although he survived the conflict, he was traumatised by his experiences and turned to alcohol to cope. The couple had one daughter. Nawal then briefly married Rashad Bey, a lawyer, but divorced him due to his chauvinist attitudes. Her final husband was the intellectual Sherif Hetata, with whom she had a son. (She divorced him in 2010, due to his infidelity.)

Working in local healthcare from 1955-1971 raised her awareness of poor health practices and further galvanised her activism and writing. She wrote her first book Women and Sex, which discussed the control of women’s sexuality within Egyptian society. Due to its frank discussion of FGM it created a national scandal, and Nawal was dismissed from her role at the Ministry for Health, where she had been Director-General of health education. The magazine on public health she had founded in 1968 was also closed down.

She then worked at Ain Shams University where she carried out psychiatric research, and later, at the United Nations. However, the main activity of her life was writing. Under Sadat, Nawal was imprisoned in September 1981 for a few months, accused of ‘crimes against the state and religion’. Undaunted, she used the time to write a prison memoir – Memoirs from the Women’s Prison – using toilet paper and kohl pencils donated by other prisoners. She was released when Sadat was assassinated, and Hosni Mubarak took power. She sued the government for wrongful imprisonment and won, but never received compensation. After her release, she founded the Arab Women’s Solidarity Association (AWSA) and was a co-founder of the Arab Association for Human Rights. She also edited AWSA’s newsletter Al Nun. In 1991, the government closed down the newsletter, and then the organisation some months later.

In 1993 she took a post at Duke University in America to avoid fundamentalist threats against writers in Egypt, a year before the near-fatal stabbing of novelist Naguib Mahfouz. She held the post of Writer in Residence at the Asian and African Languages department for three years, returning to Egypt in 1996. The harassment from Islamists did not abate. In 2002, an activist lawyer attempted to nullify her marriage using the legal system. In 2008, she won a case against Al-Azhar University who had charged her with apostasy and heresy. Several religious leaders called for her death. She refused to moderate her tone, saying ‘I should be more outspoken, I should be more aggressive, because the world is becoming more aggressive, and we need people to speak loudly against injustices’.

In 2004, she ran for president of Egypt, but withdrew because she was unable to campaign due to security forces forbidding her from holding rallies and the intimidation of her supporters. She took part in the Arab Spring uprisings in 2011, participating in the demonstrations in Tahrir Square. In 2020, she was listed in Time’s 100 Women of the Year, and particularly relished her continuing influence upon young, progressive Egyptians.

She died in Cairo after suffering from numerous health problems. Egypt’s Minister for Culture, Inas Abdel-Dayem paid tribute to her as the founder of an entire intellectual movement, a rare act of state recognition for one of Egypt’s most radical thinkers. Many prominent feminists and activists for women have acknowledged her iconic status, including Mona Eltahawy, Elif Shafak, and Nimco Ali.

Nawal el-Saadawi’s legacy lies in establishing her own unique form of feminism, an activism which burned with revolutionary ardour, and which was deeply rooted in a critique of colonialism, class and religion. Dima Dabbous of Equality Now said, ‘Her views always shocked those around her, because they were completely her own, and not the result of what custom or tradition dictates, especially regarding women. They were the views of a free spirit that wanted other women to be free too’.