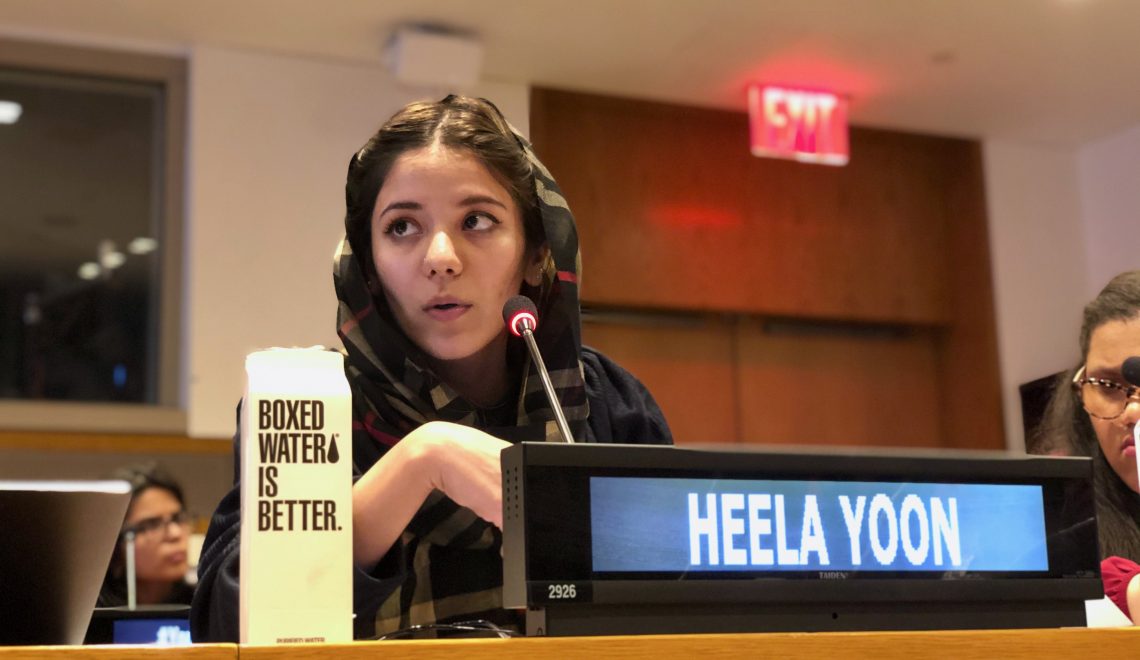 Towards a sustainable peace in Afghanistan

Heela Yoon is the founder of Afghan Youth Ambassadors for Peace, an organisation for young Afghan women peacebuilders.

What drew you into peace work?

I grew up in Afghanistan where there is constant war and conflict. Most of us want peace, and are ready to work for sustainable peace. My first time working on a peace project was in Nangarhar province, where my mom was helping women and girls to pursue higher education. During our workshop, I realized there are many barriers hindering the education of young women in provinces like Nangarhar. One of the biggest is the lack of security. My mom worked with local figures, including religious and tribal leaders, to encourage them to allow their daughters to pursue higher education, and involve them in the decision-making processes. Their meaningful involvement in these key decision-making areas will pave ways for sustainable peace in their communities, and will also remove other social barriers towards women. Due to my work in the community with local young women, and my knowledge of the root causes of their problems from an early age, I decided to start my own civil society organization. While I was working as the Cora Weiss Fellow with the Global Network of Women Peacebuilders in New York, I learnt more about peacebuilding and how we can advocate better for women’s participation in the peace process and other decision-making processes. Working with GNWP has allowed me to gain more experience and connect with different young women peacebuilders around the world.

What are the major problems confronting women in Afghanistan today, after four decades of war and conflict?

After the end of the civil war and the fall of the Taliban’s regime, Afghan women gradually emerged as a social, political and economic force. Unfortunately, after more than 20 years of Taliban and Mujahideen regimes, women of all ages in Afghanistan still face security challenges, including gender-based violence, a lack of quality education and a lack of equal rights. This limits their abilities to participate in the social, economic and political life of the nation. These challenges are more visible at the local level, where due to security and regressive culture norms, Afghan women and girls are excluded from the public sphere and decision-making processes. Most Afghan women and girls in the provinces who are impacted by the conflict don’t have access to basic health services or education. There is no legal protection or security for women in most of Afghanistan. The situation has become worse during the pandemic. With the substantial digital divide between men and women, most Afghan women do not have access to smartphones or the internet. This creates a huge gap in their educational journeys, especially in the lives of young girls at a time when most schooling is delivered online, with schools closed across Afghanistan. Young grassroots peacebuilders who are trying to reduce these barriers lack security; some are even killed by extremist groups.

Afghanistan is the deadliest place in the world to be a civilian. What needs to be done to provide security for the Afghan people?

We need UN peacekeeping missions – not only in Kabul but in all the provinces of Afghanistan. Without the strong support of UN member states and NATO, the Afghan Army cannot defeat the extremist groups alone. The government needs to control local militias so that international aid workers and civil society organisations can support civilians in the provinces and districts. Afghan warlords should not receive any funding from the international community, especially the US government. The widespread corruption and the infighting between warlords has already cost many civilian lives. The most important thing to do right now is to put in place a comprehensive ceasefire to stop the killing of civilians. The international community should put pressure on the Taliban and Pakistan (their close ally) to stop fighting while peace talks are going on in Doha.

Why is it important to raise the voices of young women?

Afghan women and girls have been excluded from the public sphere for most of their lives and throughout the history of Afghanistan. Raising and amplifying their voices at the local, national and international level is necessary and essential if we want lasting and sustainable peace. It’s crucial to the current Afghan peace process. Having a voice means having the capacity to shape and share discussion, discourse and decisions, as well as a place at the table. If we want young Afghan women to have full and equal participation in the peace process, then it is a requirement that their voice is heard. This will enable them to voice their needs and challenge gender norms in their community, both individually and collectively. Their participation should be transformative. Their voices need to be heard across a broad range of decision-making forums, from being heard at the household level to throughout the on-going political peace process.

How is political participation for young Afghan women limited?

Under-representation and harmful gender norms limit Afghan women’s full participation in public institutions and the political decision-making processes. We have many discriminatory social norms which limit women and especially young Afghan women’s effective participation in political life at national and local levels. Weak networks, limited access to campaign financing, lower levels of education, greater family responsibilities and fewer political experiences and opportunities all hamper Afghan women participation in the political sphere and the processes of public decision-making. We don’t have many female mayors in the provinces to support local young women, and young women face more political scrutiny than their male colleagues. We see female political figures being cyber-bullied on social media. In Afghanistan prejudice against women reinforces the perception that men are better leaders than women. This limits the capacity of women to aspire to public roles.

What does your organisation do to work to promote women’s involvement in the political process?

We started Afghan Youth Ambassadors for Peace Organization (AYAP) to promote the work of local grassroots peacebuilders in Afghanistan, We work for their involvement in the decision-making process through our three programmes:

Afghan for Afghan: In this programme we provide training for young women in Afghanistan to become the first responders to humanitarian crises in their communities. In Afghanistan and around the world, women are systemically left out of decision-making and crisis response strategies in their communities. We have witnessed how the COVID-19 pandemic has affected women’s rights, peace and security. It has had a disproportionate impact on women and girls, aggravating domestic violence and increasing unpaid domestic labour, as well as their risk of exposure to the virus. Through the Afghan for Afghan programme, our female members distributed awareness posters, food packages and dignity kits for those women who were vulnerable during the pandemic. With this programme, we trained our members inthe best practices on topics related to gender and conflict prevention during humanitarian crisis.

The Peacebuilders Club: Through this programme, we reach out to local grassroots peacebuilders in conflict-affected provinces to amplify their voices and build their peacebuilding skills. We train young women on how to localize Women, Peace and Security, and Youth, Peace and Security agendas in their communities, and how they can prevent violent extremism. We conducted community peacebuilding dialogues in Nangarhar province with different local, religious and local government entities on how to remove barriers to women and girl’s education and involve them in all decision-making processes, including conflict transformation at the local level. We provide a new landscape to engage with politics and public activism, and explore the role of media and technology to expand participation.

Peace Goes to School: AYAP’s Peace Goes to School programme is a unique, comprehensive approach to peace education and violence prevention that promotes a safe school environment for young Afghan girls and encourages optimal learning through academic and social growth. Our aim is to create young Afghan leaders who become ambassadors for peace and gender equality.

What do you hope to achieve through Afghan Youth Ambassadors for Peace?

We want to build peace which is just and sustainable from the ground up. This can only be achieved if we build the capacities of grassroots level young women peacebuilders, and amplify their voices and provide them access to platforms and security. Without localizing peace and engaging grassroots youth in the entire decision-making process we cannot achieve a sustainable peace.

What political barriers are there to achieving peace in Afghanistan, and how do you think they can be overcome?

There are many barriers to achieving peace in Afghanistan. One of the biggest is the lack of strong support from the international community and especially superpowers like the United States. The first agreement between the Taliban and the US government was signed without the Afghan Government playing any role in the negotiations or being signatories to the agreement. The agreement didn’t result in peace in Afghanistan. We still see targeted killings and civilian casualities from every side. Young Afghans, and particularly young Afghan women do not have strong representation in the negotiation team, and are often excluded from the decision-making process. To overcome these problems, we need a comprehensive ceasefire in Afghanistan. The international community have an obligation to put pressure on the Taliban to get them to agree to a ceasefire. The Afghan government also need to solve their internal political disputes, and provide formal and informal platforms for Afghan youth to engage in the peace process, especially through grassroots civil society organizations. Through local organisations, the government can reach out to different actors at the local level and involve them meaningfully.

What is your vision of Afghanistan in the future?

My vision is to see a sustainable and just peace in Afghanistan where grassroots peacebuilders, especially young women, have access to basic life services and quality education.

How can people support Afghan women?

At the local level, the international community and the government should provide security and funding opportunities for grassroots peacebuilders, especially young women who are doing peace work within their communities. At the national and international levels, the government, and the international community including non-governmental organisations and UN member states should support Afghan women’s full and meaningful participation in the current peace process. Young people are key actors in the current peace process. Protecting them and providing them the right platforms to engage with peace negotiators is essential.